[UPDATE BELOW] A six alarm fire at a snack stand in Seaside Park New Jersey has spread to the boardwalk. The started around 2:30 p.m. at Kohrs Frozen Custard and quickly got out of control. Firefighters are still working to contain it as strong winds spread the fire along the boardwalk. Here's video from Kohrs:

The local police chief tells NBC several businesses and a section of the boardwalk are on fire. Several firefighters are being treated for smoke inhalation. NJ.com reports that the boardwalk currently on fire "underwent major repairs earlier this year after Hurricane Sandy destroyed most of it."

Fun town pier is on fire in #seasidepark #seasideheights #jerseyshore #nj and still not under control #sad pic.twitter.com/uXe7HsrJr1

Explosions were heard emanating from inside the building during the fire. CBS Philly reports that crews are "having problems getting adequate water and with flying embers spreading the fire due to winds in the area." Their aerial footage of the massive fire is incredible:

The cause of the fire is thus far unknown. We'll update as more information becomes available. 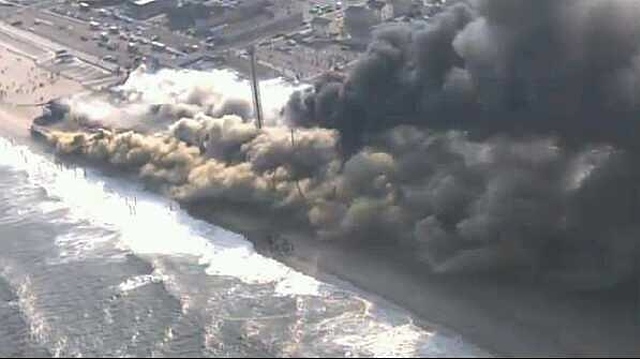 #boardwalk
#fire
#jersey shore
#new jersey
Do you know the scoop? Comment below or Send us a Tip