[UPDATES BELOW] Jaime Hessel's March 28th UberX ride from her East Williamsburg apartment to Midtown East covered 6.79 miles in 35 minutes and 29 seconds, and resulted in a $12,251.49 bill. In Uber's defense, Midtown East is lovely this time of year.

It was snowing lightly just before noon that morning, and Hessel acknowledged that surge pricing was in effect. Still, she decided to call an UberX, concerned that the train would make her late to Crawl for Cancer, a fundraising pub crawl in the East 50s that was scheduled to start at 1:00 p.m.

Hessel told us by phone this morning that her driver seemed distracted from the get-go. "The guy picked me up, and he just sat there for a little bit. Maybe for five minutes or so."

At first, he followed the GPS, and took the correct right turn on to Meeker Avenue. However, he soon started taking phone calls and checking his voicemail, and, according to Hessel, ignoring the directions. "I'm paying attention to his GPS, and I'm very familiar with the area, and I see him go right by McGuinness, and I'm really curious how he's going to get to 50th Street." Hessel estimates that the missed turn added an addition seven minutes to the trip. Still, "The driver was fine at that point. He wasn't even hostile or frustrated."

Things got more hairy on the second approach to McGuinness. Hessel alleges that the driver missed his turn again, and continued straight onto the BQE ramp. She recalled, "He slams on his breaks and he stops in the middle of the ramp, and puts his car in reverse." According to Hessel's account, she had to repeatedly urge the driver to get out of reverse and continue in the direction of traffic. The rest of the ride was punctuated with lane cutting, both while exiting the Pulaski Bridge and Midtown Tunnel.

By the end of the trip, "The driver was driving in the bus lane to make up for lost time. I had him drop me off a block away from the bar because I didn't want to be in the car anymore. I felt very unsafe." Asked why she didn't get out of the car sooner, Hessel admitted, "I felt stupid because I stuck with it."

Hessel's initial receipt for the ride was $56.40, which she immediately contested, claiming that the driver had unnecessarily extended the ride. She sent an e-mail to Uber Support, and Uber responded a few days later, on April 3rd. "They were really quick about it, and I was impressed," she admitted. "They said, 'We reviewed it, and you're right. He definitely took extra time that was unnecessary, we're going to credit your account $15."

Yesterday morning, Hessel still hadn't received her refund. This is probably due to the fact that the credit card on her account expired on April 1st, and she had yet to update the information.

"I received two e-mails yesterday. One about the status of my credit saying it should be there, it's been processed. And then a second e-mail saying they are trying to charge me $16,000, but then $4,000 had already been taken care of, so I owed them $12,000. I couldn't even tell you what this was about, because I checked my credit cards and there was no charge. I e-mailed them numerous times and they kept giving me the runaround. I was furious. I mean, you can't give me an explanation?"

Hessel and her boyfriend provided us with screenshots of the correspondence with Uber. Here it is (start reading at the bottom): 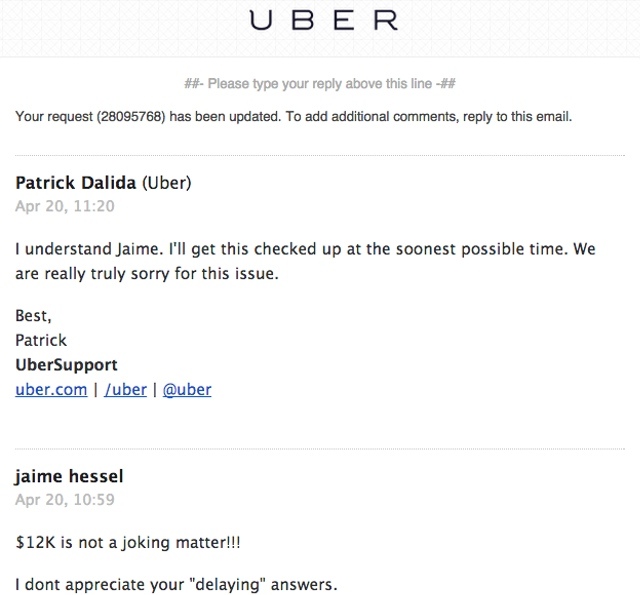 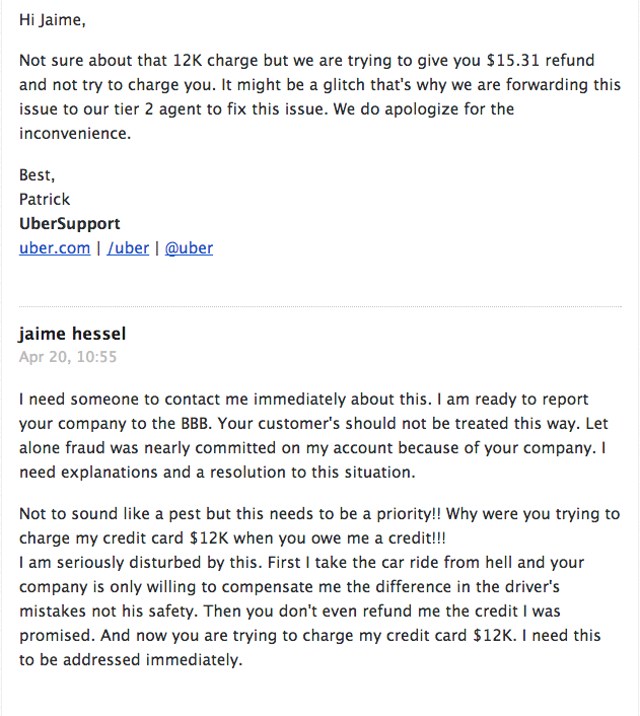 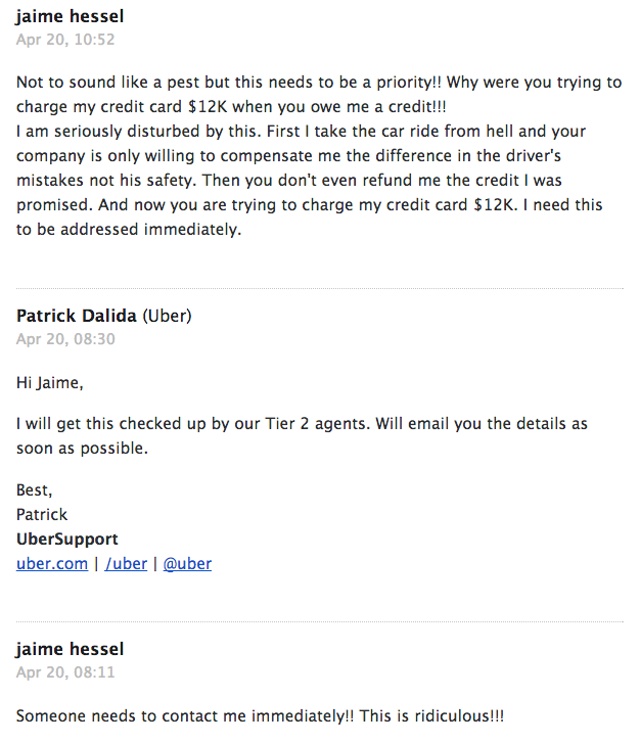 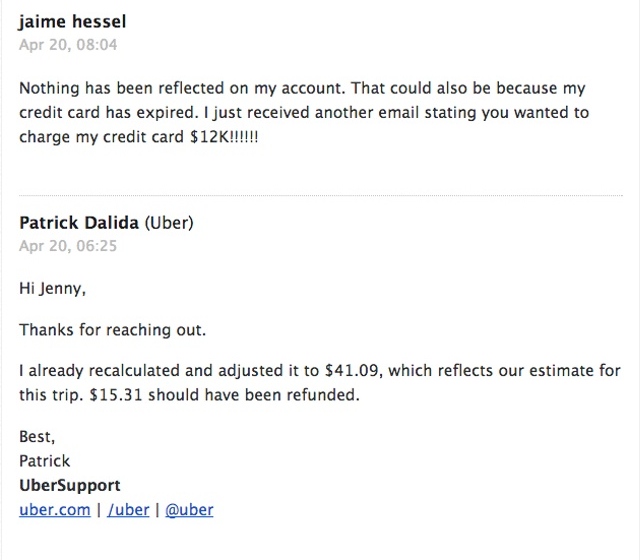 When asked if she feared that her credit card would actually be charged $12K and change, Hessel responded, "No, I don't. They contacted me late last night and said, 'We're sorry for the mixup. We've cleared the outstanding charge, you'll still receive your $15 adjustment.' But I had already explained to them that I don't want to give them my new credit card information. If my card hadn't expired when it did, they could have easily charged my card $12,000."

As of right now, Hessel is out $15. Which, "I'm fine with." But, "From what I've gone through, I should have gotten the ride for free." On the bright side, she doesn't owe anyone $12,000, and Uber says she was refunded for the attempted over-charge on the same day the issue was brought to their attention.

The moral of this story? Hard to say. Always take the train? It's okay to be 15 minutes late to a pub crawl? We'll just stick with All's Well That End's Well and It's Hard To Get Uber Support On The Phone.

We've reached out to Uber and will get back to you with any updates.

Update: An Uber spokesman says, "We apologize to this rider for any inconvenience and we have provided them with a full refund."

Update: We have received another screen shot from Hessel, which captures a new Uber receipt delivered this morning around 10:00 a.m. This time, the outstanding balance is listed as $16,251.49. 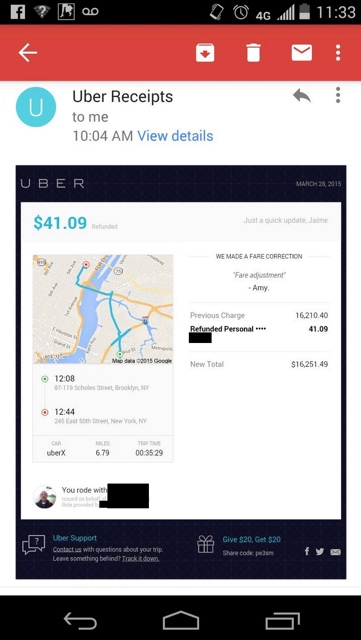 Hessel told us by phone that she e-mailed Uber at 12:30 today to ask them for an explanation. Around 2:30, an Uber representative called her back. "Someone actually called me," Hessel said. "She tried to apologize and explain the situation, that they are trying to reimburse me [for the initial $56.40 charge]. She said it was a matter of a misplaced decimal point." Hessel wasn't convinced. "I'm not stupid," she said. "They're talking about fat fingering a bunch of numbers, and these numbers have no correlation to my original charge. Plus, they charged me instead of crediting me. That's a lot of mistakes."

When Hessel asked for further explanation, she claims that the Uber representative said "Let me explain." But before she could, the phone went dead. The representative did not call back, but did send an e-mail later this afternoon explaining that Uber is following up on the issue.

According to Hessel, Uber is now offering her a full reimbursement for her trip to the pub crawl. She said, "I don't care if they don't reimburse me the $56.40 ever. I just want to make sure I don't have a balance with them. That $16,000 balance on my account? That bothers me."

Reached for further comment, an Uber spokesman reiterated that receipts aside, Hessel's account has not received any actual charges.

#first world problems
#overcharge
#uber
#original
Do you know the scoop? Comment below or Send us a Tip