[UPDATE BELOW] A 13-year-old girl is dead after being run over at the base of the Williamsburg Bridge in Manhattan. The unidentified sixth grader was hit around 2:30 p.m., and the FDNY tells us she was in cardiac arrest when they arrived on scene at Clinton Street and Delancey. She was rushed to New York Downtown Hospital, where she was pronounced D.O.A. The NYPD press office did not have any information about the accident yet, but there were reports of heavy traffic backups on the bridge.

Update 4:10 p.m.: The girl, who attended Castle Middle School on Henry Street, was crossing the south side of Delancey Street, headed north on Clinton with her friends, when she was killed by the driver of a Toyota Sienna minivan, driven by a Chinese man who does not speak English.

One witness, a friend of the victim, says, "We were crossing the street and the light changed real quick. She started going, and then she stopped, but she tripped. The van hit her twice. The first time it hit her, then when it stopped and realized that it hit her, it hit her again." Another student, who said she was the girl's best friend, says, "The crossing guard didn't even do anything they kept on waving cars through, telling them to go. You see the blood on the ground? That's where it hit her."

The girl's friend was extremely distraught and crying, but fortunately her mother soon arrived. The driver, who spoke through a Chinese reporter acting as an interpreter, seemed angry. "There were five kids in the road," he told us through the interpreter. "Three guys in the front, two girls in the back. They ran the red light and..." He made smacking motions with his hand/fist to communicate what happened. The driver was taken away by NYPD, but the NYPD press office does not have any information about any charges.

(On scene reporting by Christopher Robbins, who tells us officers ordered him to stop talking to witnesses and leave, or face arrest, because he did not have NYPD-issued press credentials.) 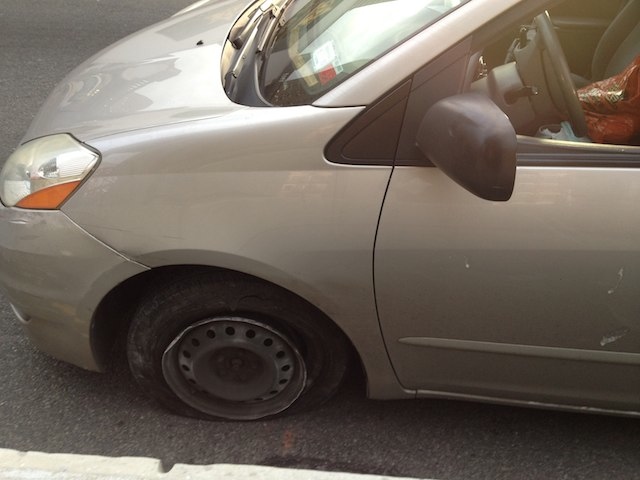 The fatality is just the latest for the notoriously dangerous Delancey Street. Last year State Senator Daniel Squadron and City Council member Margaret Chin called on the DOT to address the safety nightmare for pedestrians and cyclists that Delancey has become. "Each tragedy is a clarion call that we need more pedestrian safety improvements now," Squadron said at the time. As it happens, the DOT recently completed a major overhaul of the pedestrian/cyclist entrance to the Williamsburg Bridge. (Bowery Boogie points out that it wasn't enough to prevent this tragic incident.)