[UPDATE BELOW] At roughly 3 p.m. yesterday, a crowd of NYPD officers in full riot gear mobilized on the front steps of Pace University in Lower Manhattan, ostensibly to protect the school from the Occupy Wall Street protesters. It's become a familiar site at Pace. Given its location, right between Zuccotti Park and Foley Square, students and faculty have seen a lot of the NYPD lately—and some say they're fed up with the police using their school as a staging ground. One student says she's even considering taking legal action against the school after a cop shoved her.

English major Amy Rose Spiegel tells us she was roughed up by a cop after she criticized the officer's presence on campus. In a letter to the Pace dean, she writes, "It wasn't just a conflict, one officer shoved me, hard, on Pace property and then sneered at my shock, saying, 'I can do whatever I want.' This occurred after I told him that I didn't want the NYPD using my campus. I did not physically touch or threaten him. I have many witnesses who saw this. What does the school intend to do about this? I am FURIOUS and want the NYPD off campus NOW, as do many other students. We attend a private university, and for it to be politicized in this way is abhorrent."

We also spoke to student Brian Rentas, who asks, "Why do I need to see cops outside of my school in riot gear with night sticks?" And English professor Stephanie Hsu addressed her class after the NYPD began to seize the University's plaza, offering, "It is atypical for police to be allowed into an educational facility in this way. And it's your right as students to say, 'I don't want to be in a crowded elevator with someone with a gun' or things of that nature, without any explanation or official protocol for our community in terms of dealing with a police presence that's erratic and unscheduled. The Administration surely knows about it and is on some level colluding with the police in terms of making it possible for them to mobilize here."

The University has allowed the NYPD to enter and exit the facilities on campus as they please during the Occupy Wall Street movement. Rentas explains, "They walk into my school and use the bathroom acting like they're securing everything but there's nothing to secure. I haven't seen anybody from Occupy Wall Street come down here so there's no need for police presence." And student Ivonna Thompson questions their presence as well, "I'm just curious at to why Pace would be the main area for them to convene and utilize when they have other places in the city," she tells us. "It's strange for a University to host so many police when the police department is close by."

The NYPD Mounted Police are also using the side entrance of Pace University, on Spruce Street, as an outpost to store their horses. The manure from the animals piles up and is rarely discarded. Thompson says, "I'll be brutally honest, I don't even go near the court yard or the Spruce Street entrance like I used to because the smell is so repulsive." But when asked if the University would consider asking the NYPD to move their horses, Administrative Security member, Brian Ahearn, told us, "They're on the city street. If students are upset they can call the city."

But students aren't calling the city, they're taking it to Twitter. Yesterday, mike_spin tweeted, "since NYPD ate for free im gonna try to occupy the caf to get free food considering i pay 50,000 a year #paceproblem." Here's a copy of a letter that some disgruntled students and faculty have sent to the dean Marijo O'Grady:

As a Student Body we have noticed the presence of the New York Police Department (NYPD) on the New York City campus. While we do not disagree with what the NYPD stands for we believe that is not in the best interest of the students and staff to have them on, in and around our campus. Pace University is a private educational institution and is not the right location for the NYPD to use as a resource during the time of political and social activism in the area.

While we do believe you are trying to protect us during this chaotic time there is no reason that upwards of 40 NYPD should be in full riot gear within our doors. Having the police in the area has also left mounds of horse feces on our campus, which rarely gets cleaned, and is a smell pollution into our courtyard. All that we are asking is that Pace stay a neutral campus during the time of this regional protest and that it put its students first.

Chris Cory, Executive Director of Public Information at Pace, says in a statement, "We're carefully considering all the factors involved in keeping the safety and well being of our students as the primary concern." 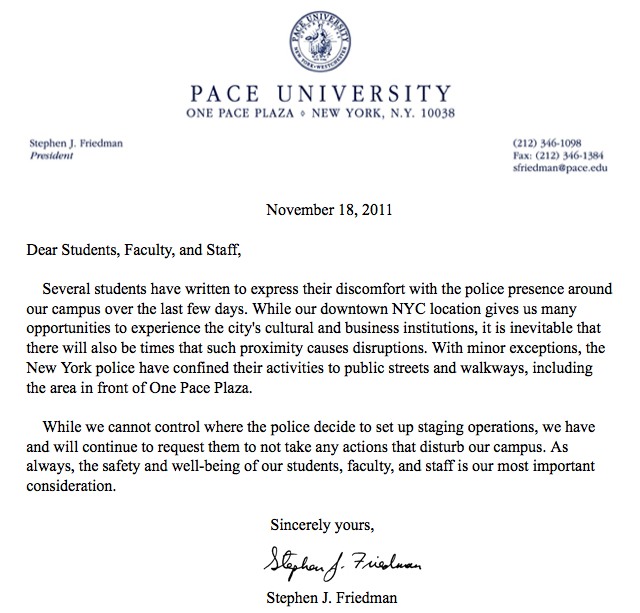