[UPDATE BELOW] On March 5th, we gathered at the base of the Manhattan Bridge to kiss our sweethearts and ring our bells: order was restored and our bikes were back where they belong, on the North Side. But in our recent trips over the bridge we couldn't help but notice that seven path-blocking, construction awnings are still making it tough for cyclists heading in opposite directions to squeeze by, and one large ladder surrounded by cones makes for an interesting obstacle. (See ladder below.) Are these hazardous barnacles here to stay?

We've reached out to the DOT, who vaguely noted in the release for the re-opening that the sheds would be there for "months," to get a more finite answer on how much longer we have to dodge these enclosures. At least the warm weather is giving people time to get their bike legs back, so by the time cyclists really start flooding all those "empty" bike lanes, folks should be nimble enough to thread these narrow needles.

Update: DOT spokesperson Nicole Garcia tells us, "The bridge is an active construction site and the sheds are expected to be on the north side through the summer to enhance safety while work continues on the bridge. The ladders are used by the workers. They are moved throughout the day and removed when the work is complete. While it was unclear which ladder you were referring to in the email below, we did notify the crew today to have them checked." 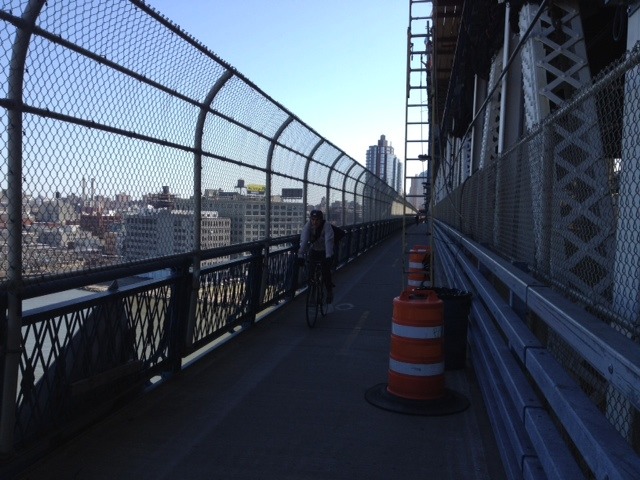 That rickety ladder on the right is just begging for some old-timey cyclist slapstick.

#bike detour
#bikes
#construction
#cycling
#dot
#manhattan bridge
Do you know the scoop? Comment below or Send us a Tip