[UPDATE BELOW] Several people were One man was fished out of the drink just before noon today after a sailboat capsized near the Statue of Liberty. No injuries have been reported, and it's unclear what caused the boat to overturn, but Parks Police tell NBC New York the boat was in the channel just south of Liberty Island when it flipped. After the boaters were rescued, the boat reportedly capsized a second time.

NBC says just one boater was rescued, while DNAinfo hears three people were saved. (The Parks Police did not immediately respond to request for clarification, but we'll update when we hear back.) "He was coming over to the statue," said Zhana Cox, 18, an audio tour guide at Liberty Island, tells DNAinfo. "It was flipped over, but he was out of the boat. He was okay."

Update 2:56 p.m.: Sergeant Pete Culver with the National Parks Police confirms there was just one person rescued: 36-year-old Jonathan Kreger, who was the vessel's sole occupant. Parks police responded to reports of a capsized boat at 11:41 a.m., and found Kreger clinging to the side of an overturned 15-food sailboat in the channel south of the Liberty Island main dock.

"He was complaining of stomach and chest pains, and he was transported to Liberty Island main dock and treated by Parks Service EMTs," Sergeant Culver tells us. Once on shore, Kreger felt better, and Culver speculates that Kreger was simply exhausted from having spent over 30 minutes trying to right the vessel himself. It's unclear what caused the sailboat to capsize, but we're told conditions were very rough today. 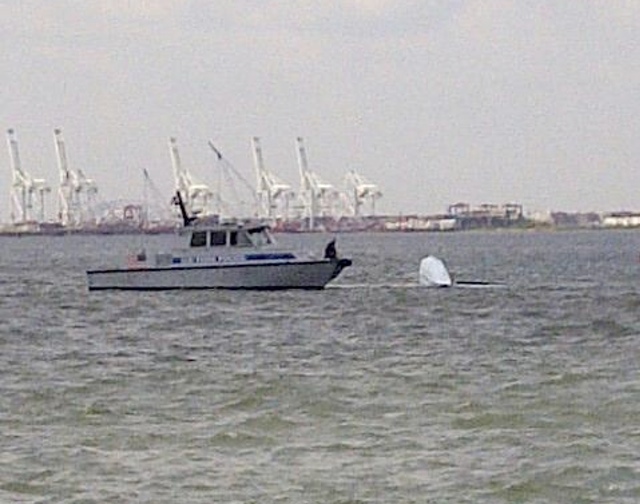 #boating
#parks police
#statue of liberty
Do you know the scoop? Comment below or Send us a Tip