[UPDATE] Ridgewood & Other Parts Of Queens Still Not Plowed Out: "It's Like We've Been Forgotten"

When Queens residents started complaining on Twitter yesterday about the lack of plowing on Queens streets during this weekend's near-record-setting blizzard, Mayor de Blasio responded with sympathetic words and, according to the city, additional resources.

"I'm not going to be happy this morning, I'm not going to be satisfied this morning," de Blasio said at a press conference outside the Office of Emergency Management (OEM) in Downtown Brooklyn on Sunday. "I am certainly not satisfied with the condition of some of the roads in some of our neighborhoods in Queens." He was referring to the neighborhoods of Woodside, Sunnyside, Ridgewood, Jackson Heights, East Elmhurst and Corona, where snow was still smothering streets from car roof to car roof that morning.

This is flushing at this moment #plowqueens missed a day of work ! pic.twitter.com/SlX4XuzbSU

Reached Monday, Amy Spitalnick of the Mayor's office stressed that parts of Queens exceeded 30 inches of snowfall—more than 26.8 inches documented in Central Park. Indeed, according to the National Weather Service, Jackson Heights was hit with the most snow in the city, at 34 inches.

Spitalnick stressed that the Mayor deemed this situation "unacceptable," and added that he "immediately" increased the number of plows in Queens from 850 to 910—nearly 40 percent of the Sanitation Department's 2,300 pieces of equipment.

By Sunday morning, the agency told NBC, more than 95 percent of the borough had been plowed. However, the city had received 900 311 calls related to unplowed streets by Sunday afternoon. 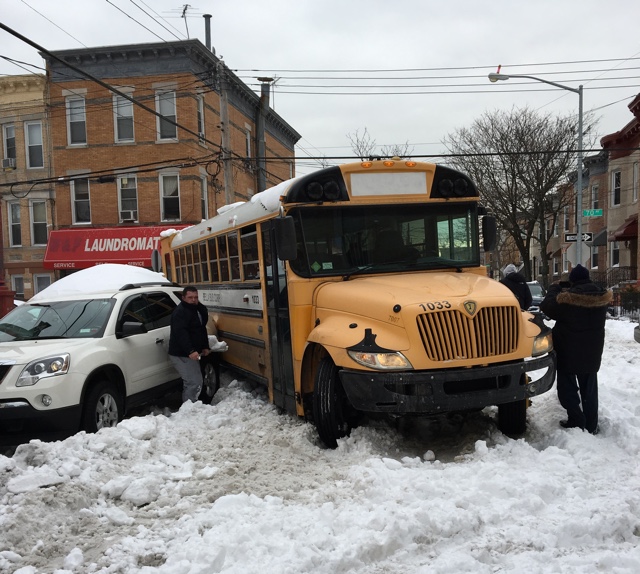 "I went first into LIC and the 59th Street Bridge, and Astoria looked pretty good," he said. "But when I went into Woodside and Sunnyside, I wasn't satisfied... Give us today, and we are going to get those neighborhoods up and running."

At 10:30 this morning, de Blasio called into the Brian Lehrer show from 50th Street in Woodside. "I think there's an improvement. We've been talking about where the problem spots are," he said, adding, "Woodside, Sunnyside, we need to get this done better today."

I hear you, Queens. We’ve got 850 @NYCSanitation plows clearing your streets. We won’t quit until the job is done. pic.twitter.com/73EEMSusX3

Artist Cate Woodruff, who lives on 70th Avenue between 60th Street and 60th Lane in Ridgewood, says that her block has yet to see a plow. Outside her home, she says, snow is one foot deep in some spots and drifted four feet in others.

"The map that shows which streets have been plowed and which hasn't is wrong," she told us this morning. According to the map, her block was last plowed at 1:05 a.m. on Monday. Photo documentation from this morning shows still-impassable drifts. "No plows have been through at all. Not once," she said. 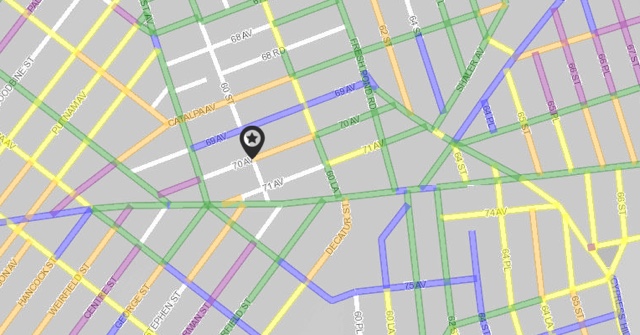 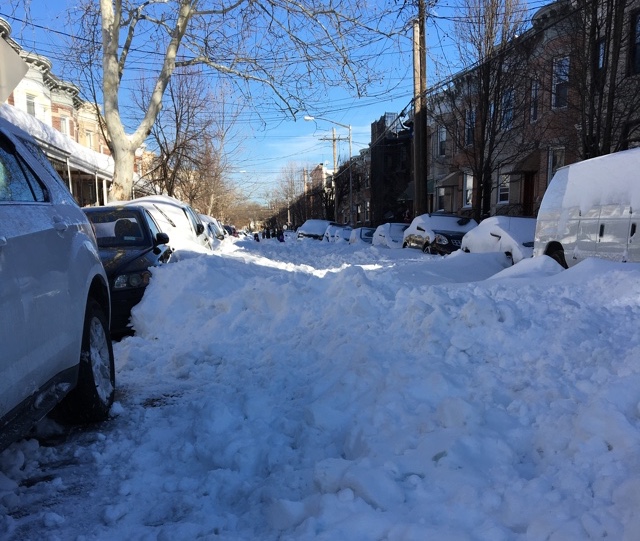 This morning, Woodruff came across a school bus lodged in a drift. "People I have talked to are really confused," she said. "It's like we've been completely forgotten. There's all this stuff about de Blasio being mad about Queens, and still nothing. It's worrisome because if there's some kind of fire there's no way."

De Blasio stressed on Monday that the city has done a good job on primary and secondary roads—the most widely-trafficked streets in the city. Myrtle Avenue, for example, one block south of Woodruff's home, is clear. But Woodruff said that she has many elderly neighbors who are still confined to their homes. "There are a lot of elderly people around here who can't walk," she said. "My next door neighbor is 88 and the one the other side is 93. They haven't come out."

Granted, homeowners are required under city law to clear their own walkways. This morning, de Blasio conceded to Lehrer that such clearing is difficult for the elderly. "Try family members, or hire a kid from the neighborhood," he said. "It is the owner's obligation to shovel out, and as streets get clearer today we're going to work on that enforcement. It's a decent thing to do."

Documenting plowing efforts under the hashtag #plowqueens, many Queens residents are showing streets still unplowed as of this morning, impeding emergency vehicles and the walk to school.

@MayorDeblasio if I sprain my ankle climbing thru mounds of snow to get to the bus in queens can I sue the city? #PLOWQUEENS ITS A NIGHTMARE

The NY Times pointed out on Monday that the slow response in Queens this weekend recalls sluggish response times across the borough during the blizzard of 1969 under Mayor John Lindsay.

DSNY said it would inquire with its GPS chief about potential inaccuracies on the plow map. We have asked the agency for the latest on plowing in the borough, and will update with any additional information.

The City has suspended alternate side parking for the duration of the week, in the hopes that residents will let the snow melt rather than attempt to dig out cars, and push snow into the path of DSNY plows in the process. The Mayor's office has also put out a call for additional snow laborers to clear snow and ice.

Asked if she was aware of Mayor de Blasio driving around Queens on Sunday afternoon, Woodruff said, "You can't even drive on my block. How would he have gotten here?"

UPDATE 12:45: Speaking at a press conference on Monday afternoon, Mayor de Blasio responded to concerns that the PlowNYC map may not be reflecting accurate information. "Sometimes there's glitches, but by and large it's a very helpful tool," he said. The Mayor also suggested that some roads may have been plowed, and then re-blocked by New Yorkers digging out their cars.

"Here's the rub: this is not your average storm," he said. "A front end loader comes through, and if they [residents] go clear the cars, they literally re-block their streets inadvertently."

Sanitation Commissioner Kathryn Garcia stressed that some of the residential streets in Queens are too narrow for plows, and conceded that some of them have not been touched since an initial pass on Saturday afternoon. Some Queens streets accumulated 20 inches without a plow pass. Today, DSNY will have more than 170 front end loaders in the borough, which push snow forward rather than onto the side of the road.

"Our first priority is to begin piling and hauling operations, to put the snow in dump trucks and take it away, and begin melting operations," she said. "Our focus is on those [unplowed] streets."

#blizzard 2016
#dsny
#Plows
#queens
#ridgewood
#original
Do you know the scoop? Comment below or Send us a Tip