[Updates below] Several hundred protesters are currently marching near Baruch College at 24th Street at Lexington Avenue to demonstrate against the planned $300/year (over five years) tuition hikes that the City University Board of Trustees is expected to vote on this afternoon, as well as a need for "democratic accountability." There's a heavy NYPD presence, with police on scooters attempting to funnel the demonstrators into barricaded areas and off the street.

Student loan bills are being burnt, and chants like "Banks got bailed out / Students got sold out," made popular by the Occupy movement, can be heard along the route. A freelance photographer tweeted, "Would LOVE an explanation from @NYPD / @DCPI why Officer Torres #11394 found it necessary to run me over TWICE on his motorbike. #CUNY" The photographer, Daniella Zalcman, added, "Visible press credential, camera in hand, very obviously working. THIS IS NOT ACCEPTABLE." There's also a heavy union presence, with the TWU and the CWA getting top billing.

We'll update as pertinent details become available. You can see the livestream here.

[UPDATE / 5:40 p.m.] According to CBS, the CUNY trustees have approved the tuition hikes that were expected to pass this evening. NYPD officers in riot gear, around 16 of them according to one reporter, have arrived outside the 25th street entrance to Baruch.

[UPDATE / 6:04 p.m.] A tipster writes via email, "In spite of them not letting anyone else in, this is how empty the board of trustees meeting is." They enclose this photo: 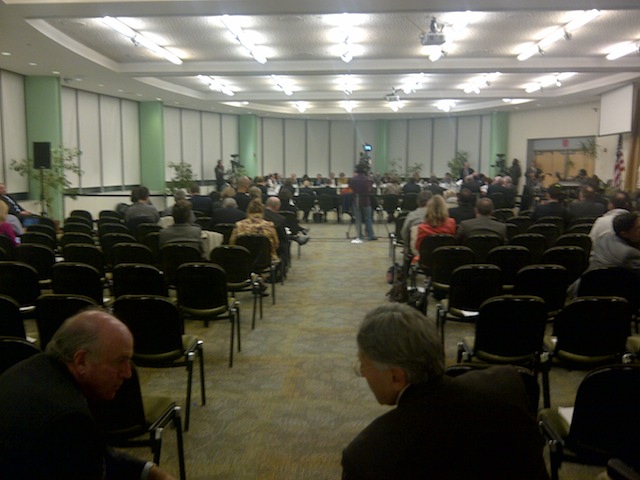 According to reporter Ryan Devereaux, around 500 students and protesters are now approaching Gramercy Park.

[UPDATE / 6:45 p.m.] There has been some confusion on the part of the protesters, but our tipster confirms that the building the meeting is being held in is The William and Anita Newman Vertical Campus Conference Center at 55 Lexington Avenue.