[Update below] Several hundred Occupy Wall Street protesters are currently posted outside Goldman Sachs' headquarters "squidding." The action, not to be confused with "tenting," refers to a 2010 Rolling Stone piece by Matt Taibbi in which the journalist calls the Goldman, "a great vampire squid wrapped around the face of humanity, relentlessly jamming its blood funnel into anything that smells like money." The demonstration is also targeted at EGT, who along with Goldman is accused of "committing egregious tax fraud at West Coast shipping ports."

Accordingly, there are protesters outside the Port of Oakland, and though some are claiming they have shut down the port, that can't be confirmed. However, here in New York we're promised "an exciting theatrical finale" incorporating Taibbi's description. Is Lloyd Blankfein about to dust off his community theater chops? 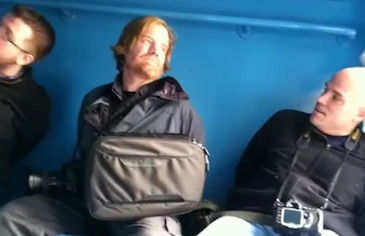 Protesters entered the atrium of the World Financial Center, a little more than a block away from Goldman's 200 West Street building, and were arrested after police instructed them to leave. A NYPD spokesperson could not confirm the number of arrests yet or the charges, just that arrests have in fact been made. One tweeter for the protesters puts the number at 68, and the person manning the Twitter account for #OccupyWallStNYC has been arrested, along with a livestreamer.

[UPDATE / 2:10 p.m.] The NYPD confirms that there were 17 total arrests inside the World Financial Center, and all were charged with criminal trespass and disorderly conduct. City Room was there, and noted that the property's owner is Brookfield Properties. Bill Dobbs, an Occupy Wall Street organizer, told the paper, “We thought we would come over and give Brookfield a direct message."