[UPDATES BELOW] Exactly three months ago, a group of protesters converged on a privately-owned, public space in Lower Manhattan to protest economic injustice. At noon today, Occupy Wall Street will again attempt to retake private property, this time from a real estate giant that has been supportive of the movement since the beginning: Trinity Wall Street church.

"Vast resources sit unused while people are in need: in need of homes, schools, jobs and public places to gather and empower communities," the protesters' release reads, before specifically identifying Duarte Square as an "uninhabited space." The sparse, commercially-zoned lot on the north side of Canal was the scene of arrests after protesters attempted to occupy it after the eviction of Zuccotti Park on November 15. Three protesters who used it as a staging ground for a hunger strike two weeks ago were prompted arrested for trespassing. Twice.

Trinity Church's rector, Rev. James Cooper, writes on the church's website, "Trinity has probably done as much or more for the protestors than any other institution in the area," and cites the church's meeting rooms, offices, computers and bathrooms that are at the protesters' disposal.

Cooper goes on to say that "there are no basic elements to sustain an encampment" in Duarte Square, and criticizes those attempting to exploit the church's position as both an ally of the movement and a major land holder. "Calling this an issue of 'political sanctuary' is manipulative and blind to reality. Equating the desire to seize this property with uprisings against tyranny is misguided, at best."

However, other members of the clergy agree with the protesters. “Trinity Church had a fantastic opportunity to be a Christlike presence by opening its doors to the protesters," the Rev. Milind Sojwal of All Angles Church on the UWS tells the Times. "And I believe Trinity blew it." Even Archbishop Desmond Tutu seems conflicted: he has released on statement seemingly supporting the protesters, and another that Trinity displays on their website that urges the demonstrators to refrain from breaking the law.

The paper describes how Trinity came to own much of the land it leases: "Since 1705, when Queen Anne of England bequeathed more than 200 acres of what was then farmland to the church." That land now accounts for six million square feet of property, much of it office space.

According to the protesters' release, the are performances by Lou Reed, Craig Nelson, Titus Andronicus, and "many more" through 7 p.m., but the "possible coordinated action at 3pm" seems to be the main event. It will be interesting to see if Trinity will utilize the NYPD in daylight hours as they previously have, or if they'll wait until nightfall when the temperature drops to deter protesters from staying.

[UPDATE / 3:52 p.m.] While none of the scheduled musical acts seemed to have showed up, the protesters are currently using ladders to scale the fences and enter the fenced-off portion of Duarte Square that belongs to Trinity Wall Street church. 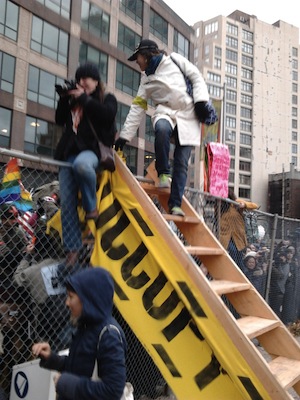 @Newyorkist, who is on the scene, claims that the police are arresting everyone inside the fence, including journalists. 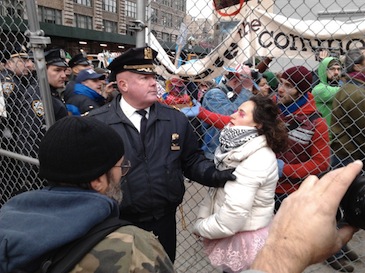 [UPDATE / 4:00 p.m.] Some of the arrested appear to be clergy, including a bishop who was one of the first to enter Duarte Square.

[UPDATE / 5:33 p.m.] Mother Jones' Josh Harkinson posts this video of the first protesters to scale the fences at Duarte Square, one of whom is Bishop George Packard.

As of right now, hundreds of protesters are streaming down Seventh Avenue. You can watch a livestream here.