[UPDATE BELOW] In case you were wondering why those low-flying NYPD helicopters were buzzing by the Brooklyn Bridge in formation today, they were sent up in honor of Chief of Department Joseph Esposito, who retired today after more than four decades in the department. Esposito, you may recall, was intimately involved in the controversial crackdown and eviction of Occupy Wall Street from Zuccotti Park, and never hesitated to bust out the police baton on protesters. 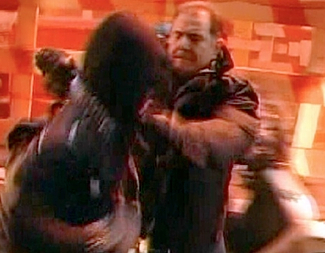 Chief Esposito schooling some young punk who made fun of Tom Jones.

Esposito retires on the eve of his 63rd birthday, which is the mandatory retirement age for all uniformed police officers. He's been the highest ranking uniformed officer for 12 years, longer than any of his predecessors, and says he doesn't know what's next for him. "Standing here today, I wish I had a couple more years to go, to be honest with you," he told reporters at the ribbon cutting for the new Central Park Precinct station house yesterday. "But that's not what's in the cards. I don't make the law, I just follow it."

Esposito, who was promoted to Chief of Department by Bernard Kerik when he was NYPD Commissioner, has been floated as a possible successor to Ray Kelly. Over the years, he's earned the respect of some of NYPD's staunchest critics, including the NYCLU's Christopher Dunn, who told the Times, "Over the years I’ve had many dealings with Chief Esposito, including having spent a lot of time on the street with him at large protests. Though he can be a tough guy and has gone overboard on occasion, he’s usually reasonable and engaging, and he has a good relationship with many longtime protesters."

But William Dobbs, a member of the Occupy press team, doesn't buy it. He tells the Wall Street Journal that Esposito "set a tone where repression of protest was everyday business for the NYPD. There’s been a tremendous amount of repression of dissent in New York City. That is part of Esposito’s legacy because he’s atop the police department." The NYPD has not yet named Esposito's successor, but we're really pulling for Hipster Cop. 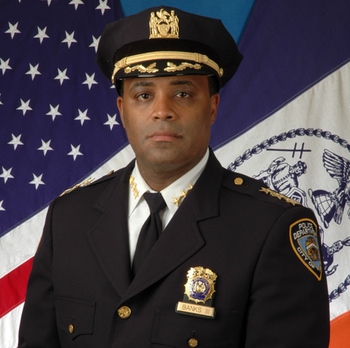 The 26-year veteran of the force and its current Chief of Community Affairs will be officially installed as the Department’s highest ranking uniformed officer in promotion ceremonies tomorrow at Police Headquarters.

“Phil Banks has proven himself time and again to be as outstanding a field commander, adept in managing police personnel and operations, as he has a consummate builder of community relations whose robust School Safety and Juvenile Justice Divisions, as well as New-Immigrant Outreach and Crime Prevention programs, flourished under his command.” Commissioner Kelly said.

Chief Banks, 50, joined the New York City Police Department in July 1986, and began his career on patrol in the 81st Precinct. He was promoted to Sergeant in March 1994; Lieutenant in May 1997; Captain in September 1999; Deputy Inspector in June 2001; Inspector in December 2003; Deputy Chief in December 2006; and Assistant Chief in June 2009. He has served in the 70th, 73rd, 79th, 81st, 90th and Central Park Precincts, Patrol Borough Brooklyn South, the Harbor Unit, and the School Safety Division Investigations Unit.

Chief Banks holds a Bachelor of Science degree in Business Administration from Lincoln University, the historically black university in Pennsylvania, whose alumni include Langston Hughes and Thurgood Marshall. Chief Banks is also a 2001 graduate of the Police Management Institute at Columbia University, and more recently completed advanced management training for Senior Executives in State and Local Government at Harvard University’s John F. Kennedy School of Government and the Executive Leaders Program in Counterterrorism at the Naval Postgraduate School, Center for Homeland Defense and Security, in Monterey, California.

He resides in St. Albans, Queens with his wife of 24 years, Vonda. The couple has three children: Philip, Jenai, and Elijah.

Chief Banks is a also member of the founding chapter of the philanthropic institution, 100 Black Men, Inc., whose past president is Philip Banks, Jr., Chief Banks’s father who retired as a lieutenant in the New York City Police Department after more than 26 years of service which included co-director of the Police Commissioner’s security detail, Executive Officer in the Bias Crimes Unit, and Commanding Officer of the Recruitment Section.

Chief Banks succeeds Chief Joseph Esposito, who retired. He becomes the 37th individual to hold the post, which prior to 1973 was known as the Chief of Operations and before 1973 as Chief Inspector.

#joseph esposito
#nypd
#occupy wall street
#retirement
Do you know the scoop? Comment below or Send us a Tip