Obama has no idea what he just got himself into. Someone sent this photo to the blog This Is FYF, which reports that "citing security concerns that bikes might be secret pipe bombs, NYPD officers clipped the locks of hundreds of bikes along Houston Street this morning in preparation for President Obama's speech at Cooper Union. The bikes were unceremoniously put in the back of the truck. Onlookers were not given information as to what would become of the bikes. Happy Earth Day!"

We're trying to get information on this from the NYPD, and will let you know if they respond. Until then, we can only assume Obama hates cyclists and wants all bike lanes permanently painted over.

UPDATE: Below, further photographic evidence of the bike seizure. And one Twitter user says, "If your bike's lock got cut for obama's ride. They're on Delancey btwn Pitt &ridge. They said they won't be here long." We have no confirmation that that is actually true, and we're still waiting for the NYPD to respond to our questions. But for historical perspective, in 2004 cyclists associated with Critical Mass sued the city after the NYPD sawed through bike locks and seized bikes in Union Square. 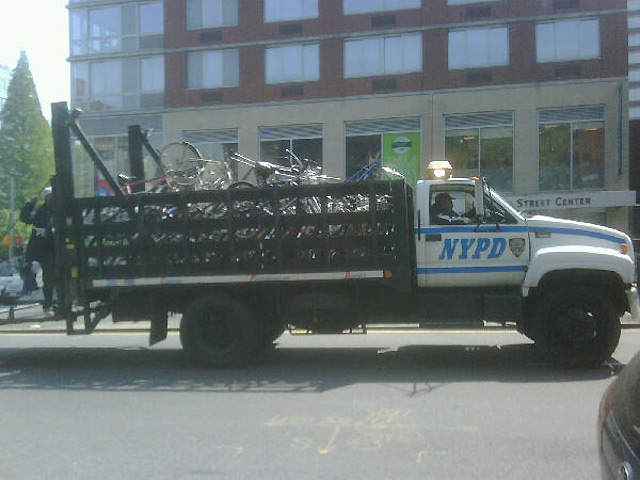 #bikes
#cooper union
#houston street
#motorcade
#obama
Do you know the scoop? Comment below or Send us a Tip