[UPDATE: The suspect, Daniel St. Hubert, was arrested shortly after the press conference. See the bottom of this post] In an evening press conference, the NYPD, Mayor Bill de Blasio and Brooklyn Borough President Eric Adams gathered to announce the name of the suspect accused of stabbing two young children in the elevator of their NYCHA building in East New York. They implored the public to contact 1-800-577-TIPS if they have any information about Daniel St. Hubert or call 911 if they see him. "No one should approach him," NYPD Chief of Detectives Robert Boyce said.

"The public is crucial here," Mayor de Blasio added, imploring New Yorkers to call in tips via phone or on Crime Stoppers' website.

"The human dynamic here is so deeply moving, so disturbing," he added.

Chief Boyce described St. Hubert as a 27-year-old black male who is 5'9" and 210 pounds and resides in East New York. He has nine prior arrests and has been on parole since May 23 for a domestic violence incident. Boyce emphasized that St. Hubert is considered "armed and dangerous."

St. Hubert has been charged with assaulting a police officer and assaulting a Correction officer, which is the reason for his current parole status.

On Sunday just before 6 p.m., the suspect stabbed Prince Joshua "P.J." Avitto, 6, and Mikayla Capers, 7, in a building elevator at the Boulevard Houses on Schenk Avenue. Both children, who were headed outside to get ices, were stabbed repeatedly. P.J. died at the hospital while Mikayala survived—she is unable to speak, but she is responsive.

"Forensic evidence" at the crime scene provided the link to St. Hubert. "We've said nothing about DNA," Commissioner Bratton told a reporter who asked whether the suspect's DNA was recovered from the knife.

The officials also said that St. Hubert was scheduled to meet with his parole officer earlier today but did not materialize.

While it's been reported that St. Hubert may be behind the Friday night fatal stabbing of Tanaya Grant Copeland, which was also in East New York's 75 Precinct, St. Hubert is only named as a suspect in the stabbings of the children, though Commissioner Bratton said St. Hubert has not been ruled out as a suspect in Copeland's death. 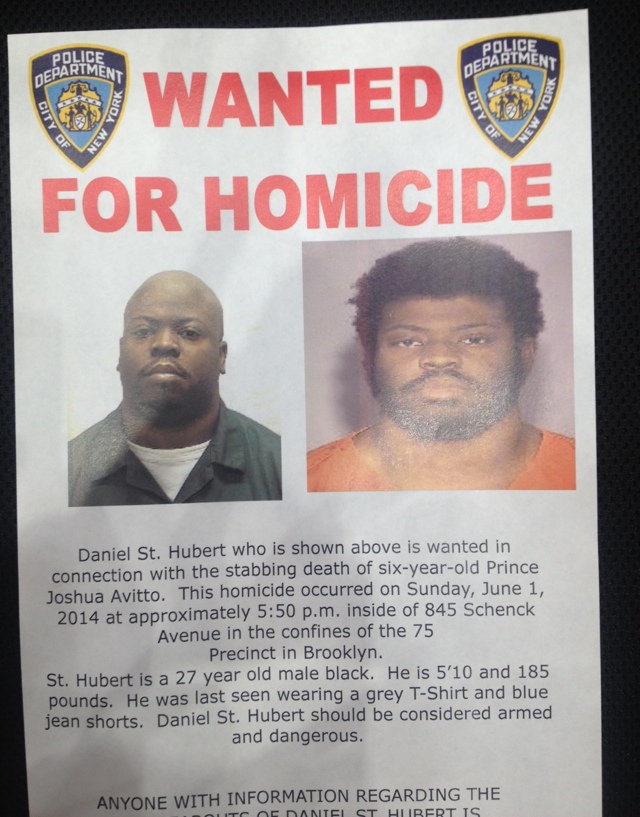 It's believed that St. Hubert changed his appearance and currently looks more like the photo on the left (Chris Robbins/Gothamist)

Commissioner Bratton said that they believe St. Hubert changed his appearance and shaved his head and facial hair, so he may resemble the photo on the left side of the poster. Mayor de Blasio said that P.J.'s parents just want St. Hubert to be arrested before he hurts anyone else, "I ask all New Yorkers to help in this investigation in any way you can. Do it for this grieving family, do it for all of us, so we can be safe."

When asked about his vow to add more officers in and around NYCHA buildings, the mayor said, "I'll say broadly, the Commissioner has already been making some substantial moves to reinforce some of the percents that need additional help and some of those are areas where there are lot of public housing developments."

The mayor added, "We're going to be working very closely with residents of public housing to keep them safe."

Commissioner Bratton indicated that when the current crop of NYPD recruits graduate in July, "there will be a significant additional compliment of officers going into the housing developments going into the summer months."

#east new york
#mikayla capers
#nypd
#Prince Joshua Avitto
#original
Do you know the scoop? Comment below or Send us a Tip