Multiple people were stabbed this morning shortly before 8 a.m. in Riverside Park, near Riverside Park South and West 63rd Street. According to a preliminary report, one of the victims was a two-year-old child. An FDNY spokesman tells us five people were stabbed, and two victims in their 30s were rushed to St. Luke's Hospital in serious condition.

Update 9:23 a.m.: An NYPD spokesman says there are four victims in total, not five. Three victims were slashed and are being treated for non-life threatening injuries, including the young male child. One female victim in her 30s was stabbed and is in serious condition. The spokesman said a male EDP (Emotionally Disturbed Person) is currently in custody.

Construction worker Carlos Ferrer says he eats breakfast by that part of the park every morning by 62nd and Riverside Boulevard. He told us he saw a black man wearing a black sweatshirt in a scuffle with people down at park level near the river. At first he thought it was a dog fighting the man, but then realized it was what appeared to be adults protecting a child from a man with "a sharp object in his hand."

Shortly after the attack, another construction worker told a dog walker that a homeless man took a pair of scissors apart and was stabbing people with one half of the scissor in each hand. The suspect is reportedly under arrest. 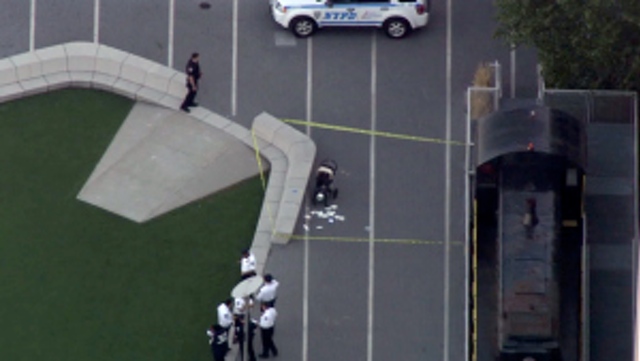 This section of the park is currently closed.

Update 10:39 a.m.:The Times counts five victims, and reports that the seriously injured woman was stabbed in the neck. “I basically just saw a woman crying,” a sanitation worker, Shurrita Fields, told NBC New York. “She was bleeding from the neck.” NBC New York and DNAinfo corroborate that the assailant used scissors in the attack. According to DNAinfo:

The man, armed with scissors, carried out his rampage between West 63rd and 64th streets starting just before 8 a.m., stabbing a 35-year old man in the stomach while he was pushing his 2-year-old son in a stroller, sources said. The attacker then lunged at the child, slashing him on the arm, sources said.