[UPDATE BELOW] It's not quite the weekend yet, and the MTA is making sure you know it: a midtown power outage has caused rippling delays along the B, D, F, M, A, C, E, F, J, Q and R lines. Service changes are affecting the B, D, E, F and M lines, specifically. Thank you for your undying patience.

See below information about delays and service changes impacting E, B, D and M trains. pic.twitter.com/J4yUh3tl7O

Delays originated with a power outage at 7th Avenue and 53rd Street around 7:20 a.m., according to the MTA. One northbound D train stalled in the tunnel, moving into the station around 8:45. Con Ed is still working with the MTA to determine the cause of the outage, so don't expect normalcy any time soon. 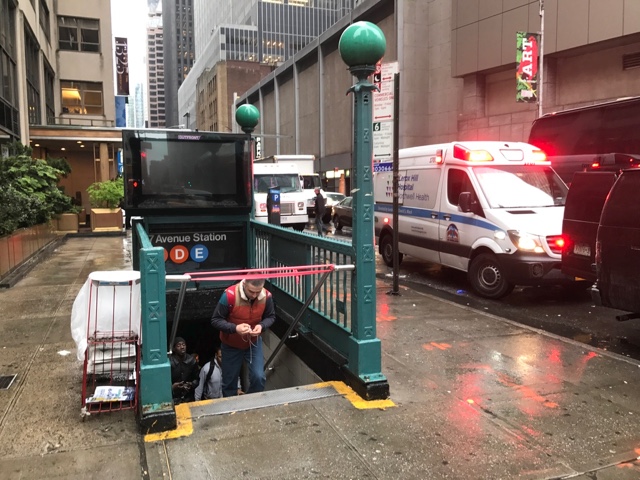 Peter Goetz and Maureen Darcy were on the stalled D train, and exited at 53rd and 7th around 9:00 a.m. Both said their commute from Park Slope took about 90 minutes. Kristina Platel, 15, and Ambreen Khan, 37, of Queens said the D train was in the tunnel for over an hour.

"Our train reversed back to 7th Ave," Khan told Gothamist. "When we thought we made it back to the platform, people stood up and almost fell due to the train braking hard."

"There was a lot of jerking," she added. "As we stepped out, the platforms were dimly lit. It looked scary. The MTA told us to be careful exiting. Everyone seemed calm even though we were stuck for more than an hour."

Backlog at Brooklyn stations is no joke. Here, at Hoyt-Schermerhorn.

People cannot even make it to the train platforms due to this #MTA power outage in #NYC pic.twitter.com/A0iSwbH8Xc

Here's to Twitter catharsis, made all the more accessible by system-wide WiFi. We'll update accordingly.

This morning's commute, brought to you by 2017, and also, Lord Voldemort #mta pic.twitter.com/qs8dmJtJPR

I really loathe the @MTA. Made me 45 mins late because of "signal problems". Seems like rush hour is the time for the signals to mess up.

delays on the A B C D E F J M N Q R stuck on the wburg bridge for half hour @MTA but you raised the price of metro cards FOR WHAT THO???

Service has resumed on the B, D, and M lines.

Crew running and hooking up cable, working to restore service along E/D/B lines after a Con Ed outage in the 53 St area. pic.twitter.com/qOZXSeGpy4

Temporary generators have been brought in at 7 Av-53 St. pic.twitter.com/7mAuaL48La

But delays are forever...

@jenchung Queens in on the fun still at 10am ish pic.twitter.com/ia2ofAC1qP

MTA spokesman Kevin Ortiz told Gothamist that the authority is confident that the evening commute will be smooth, thanks to MTA backup generators powering the impacted signals. Con Ed is still investigating the cause of the power outage, and trains are skipping the 7th Avenue-53rd Street station, which is still without electricity.

Con Ed issued a statement this afternoon. "We’re working jointly with the MTA to make repairs to underground equipment serving the subway system," the company said. "We will work with the MTA to complete the repairs as expeditiously as possible."

Governor Cuomo issued a statement about the signal issues on Friday afternoon, and directed the New York State Department of Public Service and MTA to conduct an "immediate" investigation into the Con Ed "equipment failure."

"Simply put, this was completely unacceptable," he said, adding, "The New York City subway system is the lifeblood of the city and a critical means of transportation for millions of people."