Rush hour subway service is bad, but spending your precious weekend moments attempting to navigate the MTA's labyrinth of service changes and track work means wrestling with deeply philosophical, and ultimately existential questions. Is an A train still an F train if it morphs into a D train? How many trash cans can you scream into before people start calling the police?

Apparently, for people trying to get in and out of lower Manhattan during the L train shutdown, these weekend stress amplifiers won't be an issue. [See a somewhat heartbreaking update below.]

"Currently it feels like every weekend we have no train service down here," Caroline Lasko, a Lower East Side resident, told transit reps at a Community Board 3 meeting at the Seward Park Extension Community Center on Tuesday night. "What are the plans for the F the B the D, when the L train isn’t operating?"

Marcus Book, the MTA's assistant director for government and community relations, chimed in: "In terms of your weekend outages, you won’t be seeing those during the L train shutdown."

The MTA has long promised that they would increase service on the J/M/Z and G lines during the L train shutdown (which begins THIS APRIL, and will last for 15 months). After all, an estimated 70 to 80 percent of L train riders will use other subway lines as their alternative.

Shams Tarek, a spokesperson for the MTA, qualified Book's statement, noting that the MTA in fact, may need to perform weekend work on those lines.

“Emergencies can always happen but we’ll be aggressively minimizing planned work on alternate lines during the L tunnel reconstruction, trying to avoid it altogether whenever possible," Tarek said in a statement to Gothamist. "One way we’re achieving that is by doing as much work on those lines as possible right now before the tunnel reconstruction.”

Two hours into CB3's Transportation Committee meeting, it was clear the community is facing a comically daunting list of transit issues. In addition to the influx of new L train commuters and a Williamsburg bridge transformed by HOV-3 restrictions and an explosion in bicycle traffic that will come in five months, there also happens to be a $1.5 billion mega-development sprawling along Delancey Street, adding cement trucks, dump trucks, and giant cranes to a dangerous and infuriating mix of speeding, honking drivers desperate to get to the mouth of the Williamsburg Bridge, and pedestrians who struggle to cross the street without getting hit.

Clinton Street truck trifecta this morning! @NYC_DOT do you ever talk to problem property owners like @EssexCrossing? They have been the worst of corporate neighbors over the past several years. @NYC_DOT is the Clinton St bike lane part of your L-train shutdown strategy? pic.twitter.com/nxq7p1cknk

CB3 also includes 14th Street, where the MTA has already begun underground work that will go on 24 hours a day, 7 days a week, with a parade of trucks coming in and out of the Manhattan side of the Canarsie Tunnel Hellmouth at 14th Street and Avenue A. Neighbors say that some businesses, shrouded in scaffolding and dust and noise, are on the brink of closure.

One resident pointed out that the J/M/Z platforms at Essex Street were dangerously narrow, and the staircases leading to them treacherous and inaccessible to the elderly and disabled. Could they not be widened before the L train onslaught?

"We know Delancey and Essex is gonna get a lot more people," Zajackowski said, before trailing off and shrugging his shoulders.

"Reconstructing the station involves closing the station," Book said, before explaining that it wasn't possible to do before the L train shuts down. Book noted that a big part of NYCTA chief Andy Byford's Fast Forward Plan calls for modernizing stations to be more accessible for all New Yorkers. "The system was built a long time ago."

CB member Lee Berman wondered why, with years of notice, the MTA had only procured 5 electric buses for the shutdown. "We're talking about 80 buses [over the bridge], each direction, each hour, but only five electric buses? And ten hybrids? What do you have to do to get additional electric buses?"

"The industry is really not ready for New York, we have a tough time sourcing enough equipment that can handle New York City streets," Book replied. "We are looking into getting as many electric buses as we can."

Compared to the L train issues, the DOT's problems seemed manageable. And at least these agencies sent representatives to speak: No one from the NYPD bothered to show up, an absence noted by at least two CB members. The 7th Precinct is around six blocks away.

Sean Quinn, the DOT's senior director of bicycle and pedestrian programs, won some murmurs of support from the crowd when he announced that drivers will no longer be able to use Clinton Street south of Delancey to get onto the Williamsburg Bridge while the L train is out of service.

Instead, they will have to take South Street to Allen Street, or make a left onto Grand and then a right onto Norfolk, Essex, or Allen. 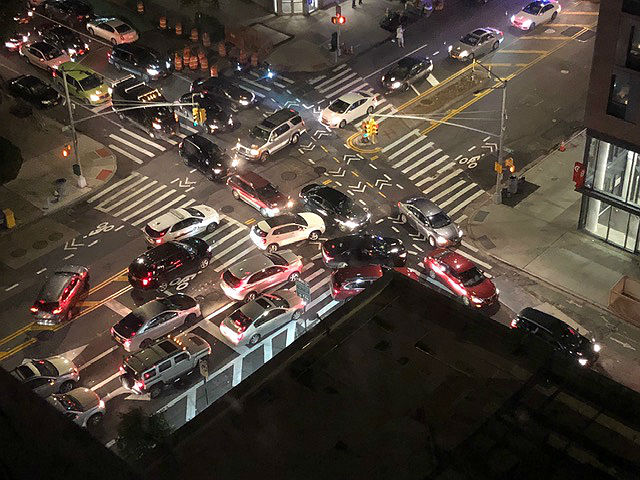 Grand and Clinton Street at 11:30 p.m. on a Friday night (courtesy Daisy Paez)

The current situation at Grand and Clinton Streets is an absurd confluence of furious drivers trying to turn north onto the bridge, cyclists going both ways, and pedestrians trying to Frogger their way out of everything. Meanwhile, a Target and what will be the largest Trader Joe's on the eastern seaboard sit on the same corner and share the same loading dock that faces Clinton Street, directly across the street from Rite Aid's loading dock.

The DOT confirmed that there is currently no delivery restrictions on any of these, other than truck size.

Adam Varsano, who said he had been living in the neighborhood for 35 years, questioned the DOT's new pattern.

"To me that seems worse than letting them go straight [down Clinton], because now they’re gonna have to turn, and there will be problems on both sides of that intersection," he said. "There are apparently two towers going up on Norfolk Street where the synagogue burned down, so there’s gonna be major construction there as well, doesn’t seem like you’ve considered that."

Quinn said he would consider it, and the night dragged on.

#dot
#Essex Crossing
#l train shutdown
#Lower East Side
#transit nightmares
#original
Do you know the scoop? Comment below or Send us a Tip