[Update Below] An unidentified man was struck and killed by two drivers while walking on Borinquen Place in Williamsburg earlier this morning around 6 a.m. Details are still emerging about the cause of the crash, but the FDNY confirms that the victim was pronounced D.O.A. and that he was hit twice by two different vehicles. The NYPD press office tells us that at this point, "no criminality is suspected." One local resident sent us the photo below, and describes the grisly scene near South First Street:

I saw family members crying and I guess the guy was hit by a car "going like 50" —according to a witness i spoke with. He was then hit by a second vehicle and was killed on the spot. A Spanish man around 50 years old is how he was described to me. I came up to the site [in front of my building] at around 10 a.m. and the street was already blocked off and flares burned out.

There was a crowd of onlookers and I saw the sheet over the body in the street. I did not see any vehicles around that looked damaged or anyone speaking with police, but witnesses said both drivers stayed at the scene. Motorists speed like crazy down this street to get on the Williamsburg Bridge. I watch them run the light, pass in the bike lane, and speed like it's a free for all.

Update 12:05 p.m.: Police sources tell the Post that the victim is Lepoldo Hernandez, 57, who was walking to meet his coworker, who drove him work on Long Island every day. Hernandez was hit by a car headed eastbound, and then run over again by a minivan driver when he was lying in the street. His coworker tells the Post, "The family is having a nervous breakdown right now. I can’t even talk to them."

Here was the scene earlier this morning after the accident: 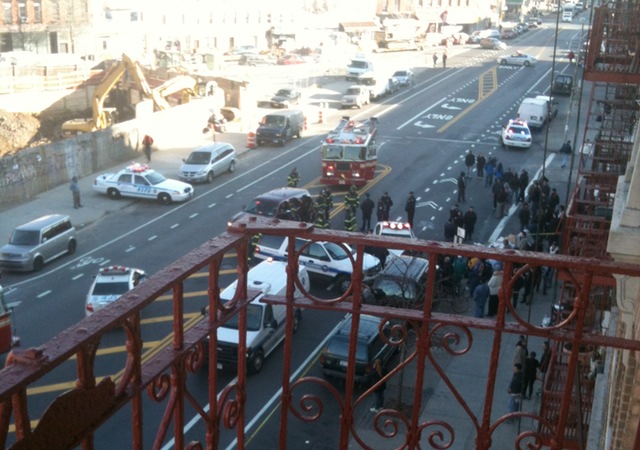 #accidents
#pedestrians
#williamsburg
Do you know the scoop? Comment below or Send us a Tip