UPDATE: The NYPD released this security camera image of the suspect, plus more details below.

Three people were slashed in the face early this morning in the Union Square area by a man brandishing a boxcutter. Police say the suspect, described as a black male in his 20s with a missing tooth, got into a dispute with an unidentified victim on a northbound 4 train at Bleecker Street around 1:30 a.m. During the argument the suspect slashed the man, 31, in the face and fled the train at Union Square.

The suspect left the subway station and soon slashed another man, 51, in the face at 4th Avenue and 13th Street. Both victims were taken to Bellevue Hospital, and while police were interviewing them, a third victim was admitted. He was slashed in the face at 10 Union Square East, by an assailant matching the same description as the other stabbings.

None of the injuries were life-threatening. The suspect remains at large; police say he was last seen wearing a white hooded sweatshirt, black vest, blue jeans and red sneakers.

Update 10:22 a.m.: Investigators say that in addition to slashing the victim on the 4 train, the suspect also punched him in the face. And when he fled Union Square station, he slapped a 20-year-old woman, "causing a physical injury."

Update 4:29 p.m.: The NYPD has released more images of the suspect, who remains at large: 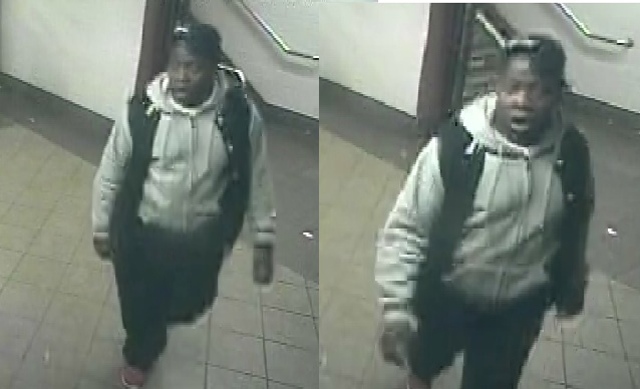 #boxcutters
#slashing
#union square
#original
Do you know the scoop? Comment below or Send us a Tip