[UPATE BELOW] If you voted in the primary and savored the satisfying tactile thunk of the steampunk lever voting machines, be advised that today we're back to multiple choice paper ballots. It's a seemingly simple process—you darken in the ovals in a pattern resembling an Anarchy symbol or penis and schlep it over the scanning machines, which are supposed to electronically record your vote with high-tech e-meters. But already this morning, just like in 2012, the Machines are at War with Democracy.

At PS 32 in Carroll Gardens this morning, Awl co-founder Choire Sicha reported a wait time of 20-30 minutes because of malfunctioning scanning machines:

cc: @BOENYC MT @samdolnick: 4 out of 5 scanners broken at PS 32 in BK, line to vote snakes out of the gym. @NYCVotes

Sounds like the Machines were even more rebellious in Park Slope:

All voting machines failed to load at PS 321 park slope this AM - 6 machines, all votes in emergency box. @azi @deblasio @NYCVotes @BOENYC

Same story in other parts of Brooklyn:

@Gothamist ALL scanners down at PS192 in w harlem! had to drop my ballot in the emergency box. didnt even get my sticker! #votingnightmare

On the plus side, STICKERS! STICKERS FOR EVERYONE! 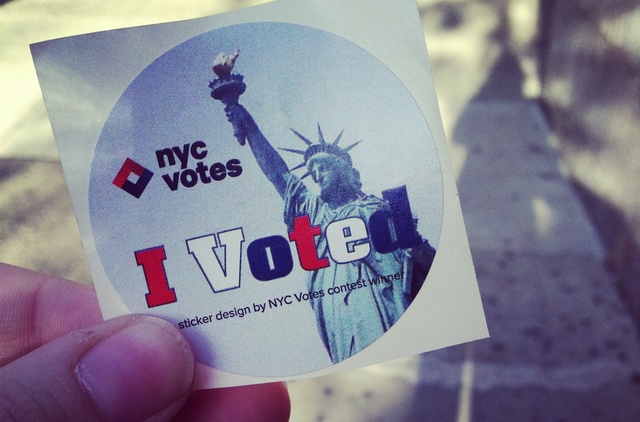 We'll update this post with more reports of voting problems as the day devolves (if you encounter any particularly outrageous lines, send us a photo). And if there are any irregularities at your polling place, you can tweet at the Board of Elections @BOENYC; just try to include your Election/Assembly District, the borough, and the address of the polling place. All that info is revealed by entering your address at the Board of Elections poll site locator.

.@BOENYC needs to know your ED/AD and address to fix! MT @DSiegel5: C'mon NY bd of elections. Scanners broken at my polling place.

It's easy to roll one's eyes at those who "can't handle" waiting a half hour or more to vote, but not everyone has the luxury of time—most people have to get to work, and an unreasonably long wait time can be tantamount to voter suppression. An allegedly deliberate shortage of voting machines in heavily-Democratic voting districts in Ohio forced would-be voters to wait on line for hours in the 2004 presidential election, and may have cost John Kerry the election. Of course, Republicans would need to suppress votes across the heavily Democratic district of New York City for Joe Lhota to have any chance today.

Update 1:48 p.m.: Some of the problems have been fixed, so get out there and vote!

@Gothamist Scanners are working at PS 321 in Park Slope and there's no line. Please update so people are not dissuaded from voting!

#democracy
#election day
#voting
Do you know the scoop? Comment below or Send us a Tip