Kidd was arrested after his 2010 Cadillac Escalade hit a telephone poll in Water Mill. According to Southampton Patch, "Police responded at 1:56 a.m. Kidd, 39, was alone in the car, according to police. He was transported to Southampton Hospital for minor injuries and released into police custody. Kidd was arraigned on a misdemeanor DWI charge on Sunday morning in Southampton Town Justice Court and released on his own recognizance."

Kidd, a beloved former NJ Net who bought a house in Water Mill, was at a fundraiser held by NeYo honoring George Lucas last night. In 2007, Kidd's first wife accused him of abuse (he said she abused him, too). 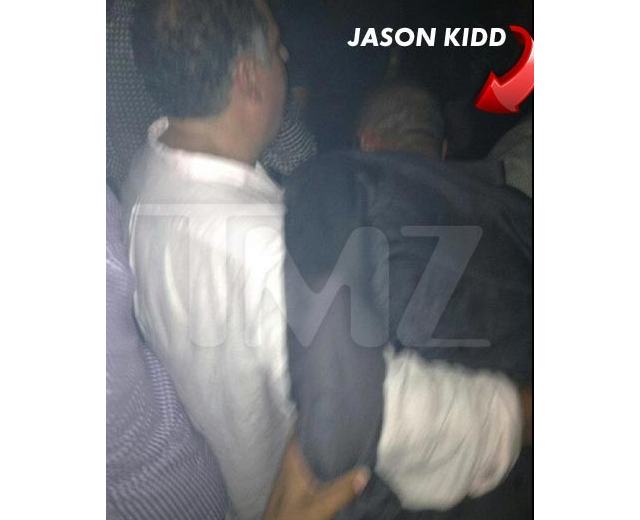 Update: TMZ has a photo of what it claims is Jason Kidd being "carried out" (or supported) from a club. The gossip site reports that Kidd was "being carried out of a club called SL East. Multiple witness tell TMZ that Kidd appeared "incredibly drunk" -- so much so that at one point he tried to hang from a club light and broke it. According to the multiple witnesses, after being carried out by a few friends, Kidd got in his car to drive off ... despite protests from his friends. Kidd left the club around 1:00 AM and crashed his car less than an hour later."