Update: Jumper On 70th Floor Of Rockefeller Center Talked Down, Now In Custody

We just received a report of a jumper at the top of 30 Rockefeller Place. The FDNY confirmed to us that a male was on the ledge of a 70th floor of the building, on the observation desk behind a 10 foot piece of glass. FDNY are currently on the scene clearing all people from the area, the observation decks have been closed, and we'll update this post when we hear new information. [Updates below]

Update 4:15 p.m.: Below, check out a grainy pic of the scene currently. You can see the possible jumper on the right side of the screen. That photo comes from a closed circuit TV at NBC. 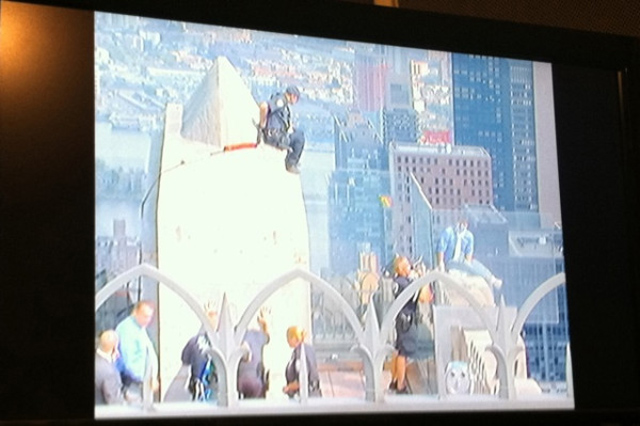 A pic of the scene: shaun harrison's twitpic

Update 4:30 p.m.: FDNY informed us that the situation is still ongoing, while Twitter users are noting that a large crowd is gathering to observe the scene: "someone's trying to jump off the rockefeller center observation deck, and tourists are taking pictures like it's the highlight of their trip," Tweeted Athanasia Kotopoulos.

Update 4:40 p.m.: According to an NBC employee watching the video feed, a cop "just jumped over the glass encasing. He is sitting across from him talking. Police man is connected to a bungie/rope." In addition, @rozzy Tweets: "Watching internal feed of man on top of Rock Center. He has an American flag bandana over his face and is also wearing a tie. NYPD on scene."

Update 4:45 p.m.: The NBC employee told us that the situation is "actually getting kinda scary, police seem ready to snatch him and he seems ready to go." He adds that the jumper seems prepared for the attention: he "has several bags, one of which has a jug of water, and was handing policemen letters with what I guess was messages on them. He has an american flag bandana covering his face and seems rather young. at most lower 20s."

Updated 4:50 p.m.: According to the NBC employee, police unsuccessfully just tried to grab the man, but missed: "Was kind of a tense moment."

Updated 4:55 p.m.: According to the NBC employee, "All is well, he agreed to come down and the police just got him over."Other Twitter users are confirming that report. FDNY just confirmed to us that he is off the ledge, and did not jump, and is in police custody.

Below, you can see a shot from the NBC video feed of the man being escorted off the roof by police: 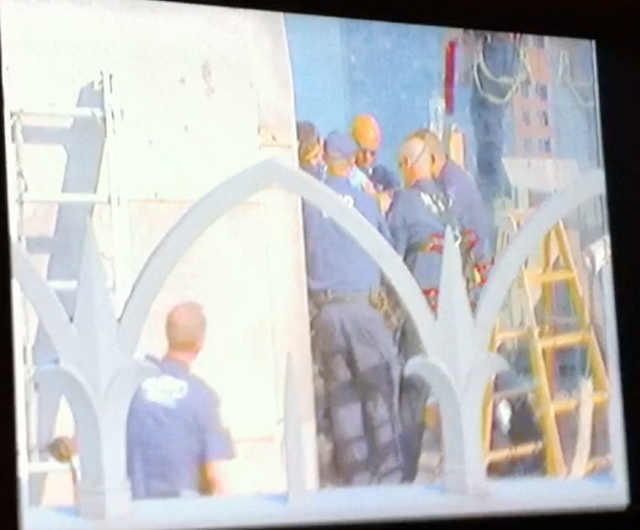 #fdny
#Jumper
#rock
#rockefeller center
Do you know the scoop? Comment below or Send us a Tip