[UPDATE] Is This Fellow With The Razor Scooter Burning Mezuzahs In Brooklyn?

[UPDATE BELOW] The NYPD Hate Crimes Task Force has released these surveillance images as part of its investigation into the desecration of a dozen Jewish religious symbols outside South Williamsburg apartments. 11 mezuzahs (prayer parchments kept inside small ornate cannisters that are affixed to doorways) were set ablaze on Monday afternoon in an apartment building at 85 Taylor Street, in the Taylor-Wythe Houses. A fire-damaged Mezuzah was also discovered yesterday inside of 130 Clymer Street, which is where these security camera images were obtained.

The arson spree coincided with a day of remembrance for the Holocaust, but investigators have not confirmed that the arson was a hate crime. They're seeking one Rubin Ubiles for questioning; he's described as a Hispanic male, 20-25 years old, seen here wearing a purple doo-rag and a black jacket with a "NY" symbol on the shoulder and "New York" across the chest. And of course, be on the lookout for his totally badass razor scooter.

Here's a mug shot of Ubiles released by the NYPD. DNAinfo believes this is his Twitter account, which features such aphorisms as "LIFE IS LIKE A FIRE, IT BURNS BUT U TOUCH IT- U KNOW IT'S GOING TO HURT BUT OUR PAIN SAYS F**K IT -MACHOGREENE21..." 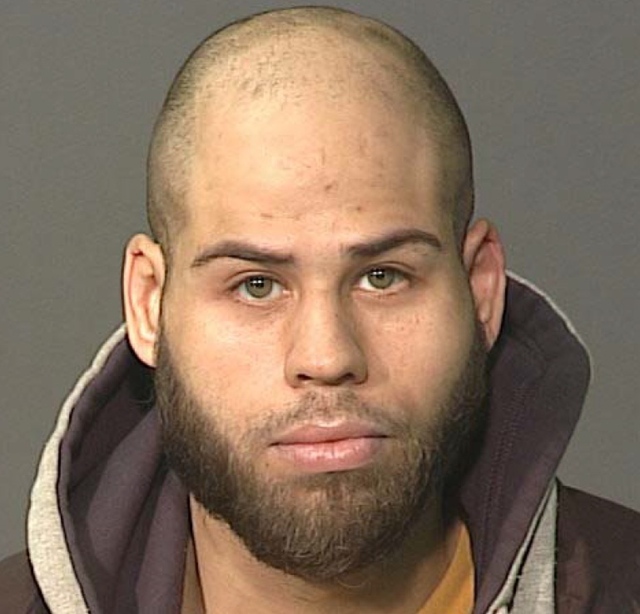 “This was an attack at the heart of the community,” City Councilman Stephen Levin (D-Brooklyn) said at a press conference Tuesday. "The mezuzah is a sacred object in the Jewish religion. It’s a blessing at the home and we can’t allow an act like this to be tolerated.”

Update 1:22 p.m.: Today Ubiles appears to have posted a lengthy subliterate statement proclaiming his innocence on Facebook, saying, "IVE WORKED WOTH THEM FOR YEARS , SO WHY CREATE AN UNNECCESSARY PROBLEM FOR ME WHEN IM ON THE VERGE OF FINALLY GROW AS A PERSON." But he also declares, "WHEN JEWS BURN WOOD AND GARBAGE ON EBERY CORNER, ITS OK TO POLLUTE THE SURROUNDINGS." Here's a screengrab of the whole post, first discovered by Danielle Tcholakian at Metro: 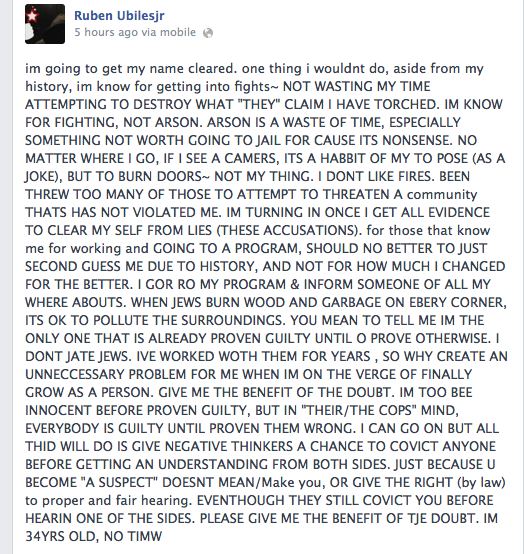