Was the New York Times' precious email list of subscribers just hacked? Are you and your children safe from "hackers" who will try to "hack" away at your "cyber limbs" until you bleed binary code? When will we finally stop trusting the Times and just succumb to the warm, hermetic embrace of News Corp? An email that lots of important people received today from "nytimes@email.newyorktimes.com" told them they had cancelled their home delivery subscription, even if they hadn't, and urged them to reconsider. Via Twitter, the New York Times denies sending it, and calls it a "spam message." Can you win a Pulitzer for "Most Polite, Grammatically Correct Spam email?"

A coder and reporter for the Washington Post notes that Epsilon, a marketing firm, apparently had permission to send emails to Times subscribers, so it may have been a "mistake" rather than a breach of security. Then again, The Observer reports that people on Twitter are noting that Epsilon was hacked last spring. A spokesman for Epsilon tells the outlet they hadn't heard of the email until questioned by a reporter, and are looking into the issue now.

Until then, you can be amused by the inevitable Twitter account that this major important news media event has spawned: NYT Spam. Read the awful, despicable email below, and we'll update as more information becomes available.

UPDATE / 3:47 PM: New York Times media reporter Amy Chozick somehow gets an exclusive with the paper's spokesperson, who says the email was in fact sent by the paper, and "Should've gone to appx 300 people & went to over 8 mil."

The Times' corporate spokesperson, Eileen Murphy, writes to us via email:

An email was sent earlier today from The New York Times in error. This email should have been sent to a very small number of subscribers, but instead was sent to a vast distribution list made up of people who had previously provided their email address to The New York Times. We regret the error.

We await the press conference at which David Carr's penis will be forcibly enlarged by a Nigerian Prince who wants you to know that a single mom can make over $500 a day working from home. 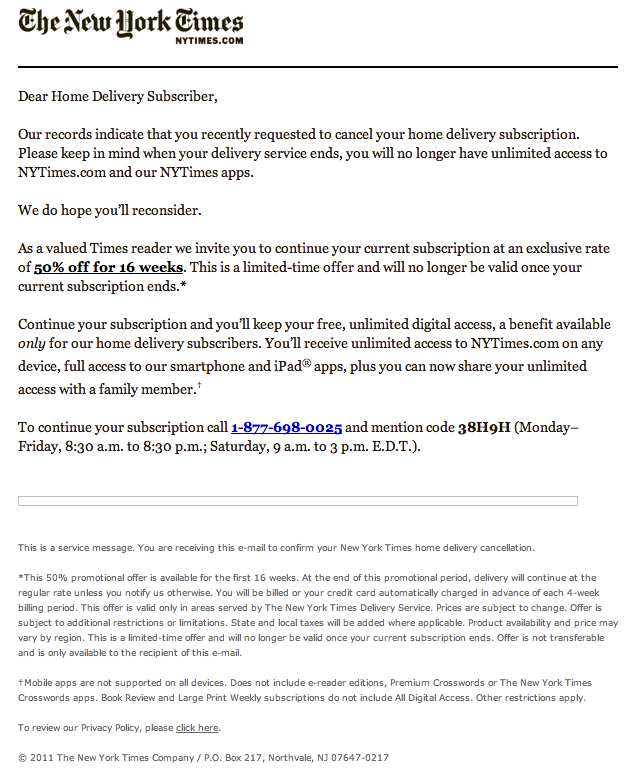