[Update Below: Hillary Clinton's doctor revealed that she was diagnosed with pneumonia on Friday.]Hillary Clinton abruptly left the annual September 11th memorial ceremony at Ground Zero this morning after she became "overheated." 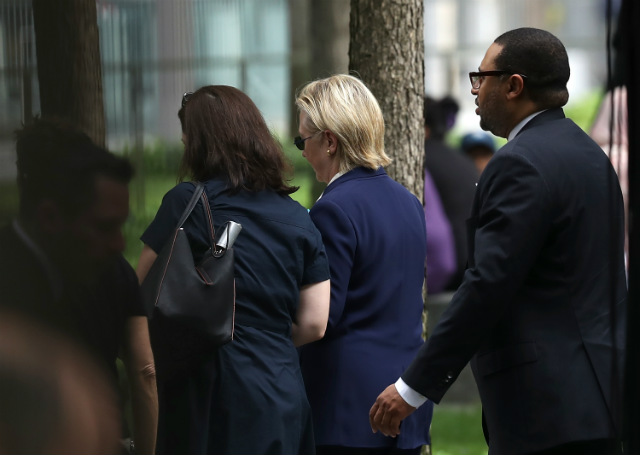 And here's video of her getting into a van to leave the event.

Spokesman Nick Merrill said in a statement that Clinton left after 90 minutes, and went to her daughter Chelsea Clinton's apartment near Madison Square Park to recover. She is now reportedly "feeling much better."

It's unclear whether Clinton required any medical attention. Reporters and onlookers have gathered outside Chelsea's apartment.

An anonymous police source who claims they were 15 feet from Clinton told Fox News that they saw her "stumble off the curb," "appeared to faint," and get into a van, possibly losing one of her shoes in the process. The source added that she was "clearly having some type of medical episode."

Clinton's press pool was apparently unaware of her whereabouts when the incident happened.

At around 9:50 am the campaign confirmed that Clinton had left the memorial about 20 min earlier, around 9:30 a.m. https://t.co/OcarzxXtEU

First information from the campaign on Clinton's whereabouts came around 11:00 am to the press pool https://t.co/XuPLc68I8G

Trump, who has repeatedly made insinuations about Clinton's health during the campaign (sparking a new conspiracy movement), told reporters he didn't know anything about the incident.

Asked Trump about Hillary Clinton's health incident this morning. He said he didn't know anything about. pic.twitter.com/9zVhLHR0op

Just before noon, Clinton briefly addressed reporters as she left the apartment.

#Hillary outside Chelsea's apartment in NY now "alive and well", says "it's a beautiful day". pic.twitter.com/e22QCAcIrj

When Hillary emerged from Chelsea's apt., a little girl ran up to her & asked her to pose for a photo. HRC obliged. pic.twitter.com/kyxwMEbiJZ

Update: After heading to her home in Chappaqua, Hillary Clinton was evaluated by her longtime physician Dr. Lisa Bardack, who released a statement about her suffering from pneumonia.

Just in: Statement from Clinton’s doctor after examination at her Chappaqua home pic.twitter.com/22GGnrPovI

#9/11
#donald trump
#election 2016
#hillary clinton
#overheating
#september 11th
Do you know the scoop? Comment below or Send us a Tip