[UPDATE BELOW] Gawker Media's commenting database has been hacked and various Gawker sites are asking commenters to change passwords, adding, "We're deeply embarrassed by this breach. We should not be in the position of relying on the goodwill of the hackers who identified the weakness in our systems. And, yes, the irony is not lost on us." Below, screengrabs of the hack on Gawker, which has been removed from the site.

Mediaite has more details on the hack:

Earlier this year, Gawker attracted national media attention and launched an FBI investigation with a report on an iPad security breach which exposed the identities and personal information of 114,000 iPad 3G owners, including Mike Bloomberg, Harvey Weinstein, and Diane Sawyer.

Now, Gawker has been hit with what appears to be a security breach of ten times the magnitude. Given Gawker’s public flaunting of the hacker community that populates 4Chan — with which our source emphasizes the group involved in this particular database hack has no affiliation — combined with Gawker’s at-times schadenfreude-filled celebration of other major media outlets’ failings, this is sure to be a story that gets lots of attention in the coming days and weeks.

Plus there's an alleged screengrab of Gawker editors referring to commenters as "the peasants," and an anonymous source claiming to be connected to the hack explains, "We went after Gawker because of their outright arrogance. It took us a few hours to find a way to dump all their source code and a bit longer to find a way into their database."

UPDATE: It seems that it's not just Gawker's commenting system that was violated, but Gawker's content management system, which editors use to publish every post. Gawker's Adrian Chen just wrote in Twitter, "FYI: That post linking to a torrent of our source code was not written by me. We've been hacked."

Below, a screengrab of the entire post, which was removed in about 15 minutes. The first comment on that post, from "The Dewd," was probably the best: "Well this is indeed embarrassing...but then again, pageviews are pageviews, even if they post was written by some 4chan tard. Seems a little too insidery though. Most Gawker readers don't want to hear about UNIX standard has encryption. Maybe should have been posted on Gizmodo?" 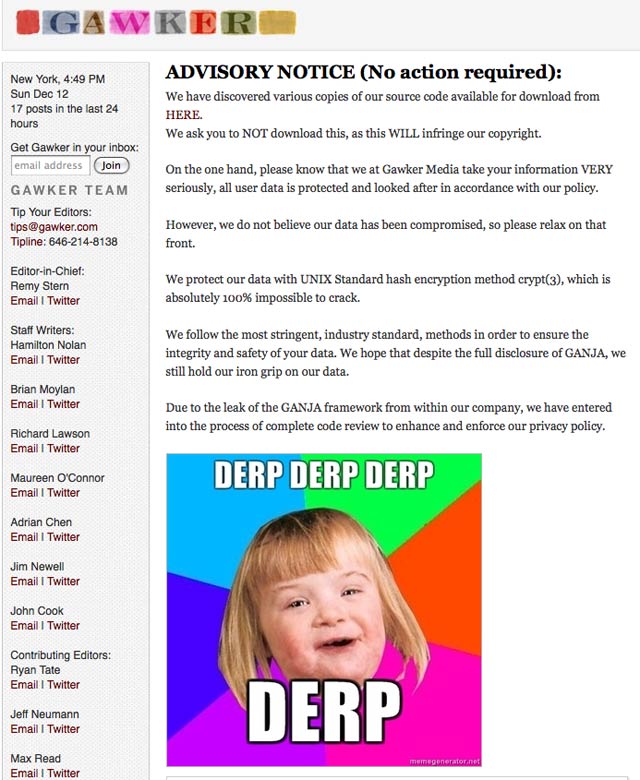 The hacked post supposedly linked to a bit torrent download of Gawker's source code on Piratebay.org. On that site, the hackers introduce the bit torrent thus:

So, here we are again with a monster release of ownage and data droppage. Previous attacks against the target were mocked, so we came along and raised the bar a little. Fuck you gawker, hows this for "script kids"? Your empire has been compromised, Your servers, Your database's, Online accounts and source code have all be ripped to shreds! You wanted attention, well guess what, You've got it now!

Just what Gawker needed, more attention! Chen recently tweeted that, in essense, L'Internet, c'est Gawker: "I think this Gawker hack should be known as 'The Night All of the Internet Changed Their Passwords.' " And now he's using Twitter to try to get answers out of Gawker publisher Nick Denton on whether the commenter hack has also compromised Facebook passwords if used to log into Gawker. (Gawker Media tech guru Thomas Plunkett replies, via Twitter, "Facebook passwords are not compromised. We do not have access to them.")

#4chan
#anonymous
#commenting database
#gawker
#gawker media
#hack
#password
Do you know the scoop? Comment below or Send us a Tip