[UPDATE] Friday Night On The A Train: "I'm Going To Cut You And I'm Going To Get Away With It"

A straphanger taunted and lunged at two people with a tiny, sharp, pointy object on the A train on Friday night, threatening to cut them and get away with it while air kissing and waving at the subway passenger filming the incident.

In a 2:15 video of the attack, the suspect dramatically pulls an encased sharp object out of her red leather handbag and uncaps it with her teeth, asking her victims rhetorically, "Do you want a clue of what's going to happen when I get off this train? I'm going to cut you and I'm going to get away with it."

She approaches the victims, a man and woman, with the weapon, and warns the man to "keep talking," jabbing the point towards his face. The suspect then turns towards the camera and does a finger wave saying to the cellphone videographer, "Hi, I'm used to cameras!" Less than a minute later she instructs the filming straphanger to "get my good side."

"Apparently the whole thing started when my friend was holding onto the pole that she [the suspect] was leaning on and turned very nasty, even after my friends attempted to move away from her," an anonymous tipster and acquaintance of the victims told us this afternoon, via e-mail.

The female victim, Fahema (she asked that we withhold her last name for privacy reasons), said that the entire altercation was not caught on video. "She said, 'I like messing with people like you because I know you won't do a thing about it,'" she told us via text-message. "Also, [addressing Fahema's male companion], 'Take your Indian girlfriend and eat some curry.'"

(Footage of the incident was uploaded to YouTube and titled with language that is considered offensive to the transgender community. We've uploaded it here in order to omit the video's offensive description.)

At the 1:37 mark, having retreated back to the subway pole, the woman lunges back at the male victim and manages to scrape him and his female companion on the face before another straphanger restrains her. Free of the intervening passenger, the suspect threatens him with the sharp object as well.

According to the NYPD, a 28-year-old woman and a 35-year-old man boarded a southbound A train at Jay Street Metro-Tech around 7:00 p.m. on Friday. They proceeded to get into an argument with the suspect, who was already inside the car.

The suspect fled the train at Nostrand Avenue. Believed to be about 30 years old and 6 feet tall, she was last seen wearing a black sheer blouse, black pants, black shoes and a yellow coat, and carrying a bright red purse.

Fahema says that she has a "minimal scratch" on her forehead, and that her companion sustained a scratch on the right side of his face when the suspect punched him below his right eye with her weapon. Both victims refused medical attention on the platform.

Anyone who witnessed this assault or has more information in regards is asked to call Crime stoppers at 1-800-577-TIPS (8477). The public can also submit their tips by logging onto the Crime stoppers website at WWW.NYPDCRIMESTOPPERS.COM or by texting their tips to 274637 (CRIMES) then enter TIP577.

[Update Dec. 23:] A woman who appears to be taking responsibility for the incident posted an apology on Facebook this afternoon. The message is semi-private, and was provided as a screenshot by a tipster. We have reached out to the NYPD for information on the investigation, and will update accordingly. Chrissy Jackson, whose Facebook has been intermittently deleted and edited in recent days, has not responded to multiple requests for comment. 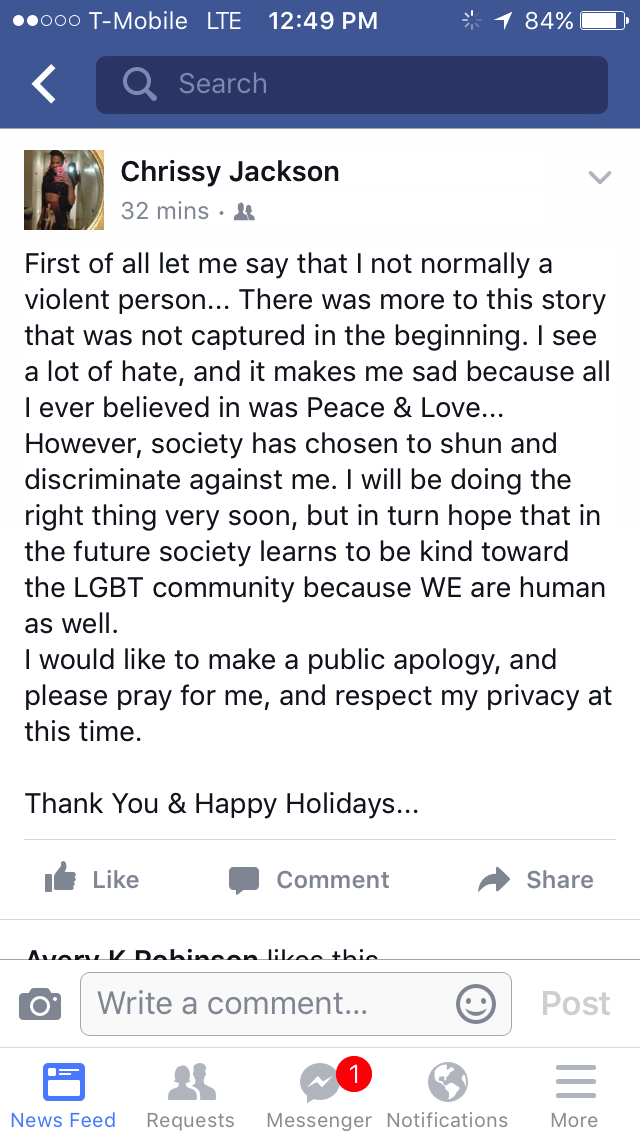 #a train
#a train attack
#blade
#slashing
Do you know the scoop? Comment below or Send us a Tip