Gunfire in a Brooklyn building led police to find the bodies of three men and then the body of the apparent shooter, dead of a self-inflicted gunshot wound inside. While the police are trying to determine a motive, it's believed that the killer may have been angry at former bandmates. Update: At least one person found dead appears to have been in the band, The Yellow Dogs. See update below.

According to the NYPD, the incident occurred around midnight at 318 Maujer Street. Police, who apparently were responding to reports of a man with a rifle, heard gunfire outside the building. (Contrary to earlier reports, the police were not fired upon and they did not exchange any gunfire.) Outside, they found a 22-year-old man with a gunshot wound in the arm. When they got inside, they found the bodies of three men—a 27-year-old man with a gunshot wound in the chest on the second floor and, on the third floor, a 35-year-old man and another man, both shot in the head.

The suspected shooter was found on the rooftop with a self-inflicted gunshot wound. A weapon was recovered next to him. The victim who was shot in the arm was taken to Elmhurst Hospital. 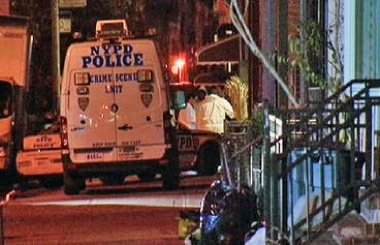 The police could not confirm whether the victims and shooter had been in a band, but an NYPD spokesman said there "may be a musical element." According to the Post, the shooter was a "musician furious over being thrown out of a rock band." The police also could not confirm whether the victims were Iranian yet as the investigation is ongoing, but the spokesman did say one could have.

The shooter reportedly used "a Century Sporter .308-caliber semi-automatic weapon with a 20-round magazine" to shoot at the man standing outside the building before going in. The Post reports, "He fatally shot two people on the first floor and one on the third. The third floor victim was shot in his bed. The crazed murderer also fired into a first floor bathroom, where a couple was apparently hiding."

A neighbor told the Post that the building has been holding numerous parties, "During the summer it was ongoing, really loud parties with the street blocked off by gypsy cabs. It was the usual hipster rave scene."

Update: The NY Times reports, "Neighbors said the assailant, who was not immediately identified, was a member of a band of Iranian expatriates called the Yellow Dogs. His victims were said by the police to be men in their 20s and 30s. At least one victim lived in the three-story building, at 318 Maujer Street, which the band, according to its Facebook page, called home."

The Yellow Dogs recently performed at Brooklyn Bowl and played at many local venues, like Glasslands, the Knitting Factory, Cameo and Shea Stadium.

Update 2: The Daily News says the victims and killer were in The Yellow Dogs, "The gunman has not been identified. Sources said he was kicked out of the band for selling equipment." However, the News identified some of the victims: Soroush Farazmand, Arash Farazmand and Ali Eskandarian.

Update 3: The shooter has been identified as Raefe Akhbar who was also known as Aliakbar. According to the Post, Akhbar "allegedly shot the band’s 27-year-old guitarist, Soroush Farazmand, in a second-floor bedroom and then climbed to the third floor where he killed singer Ali Eskandarian, 35, and drummer Arash Farazmand."

A few of the band's members were from Iran and were seeking asylum here. Per the Wall Street Journal, "In a CNN interview, the band talked about leaving Iran, where playing rock music is considered un-Islamic and therefore frowned upon. 'The law has a problem with rock music, so we can’t play it,' says one of the members. The group describes their music as rock played with bad equipment, singing in English about everything from Iranian oppression to American greed and consumerism."

Koory, Looloosh and Obaash met and formed the way of young rock bands since time immemorial: Hanging out at a local park as teenagers, among skaters and punk rockers, they bonded over their mutual tastes and began playing together. It’s a pretty standard, unremarkable story — except it took place in Iran, where, as Koory puts it, “you can find instruments, but the problem is that you’re probably going to get the shittiest ones, at triple the price,” and where the legality of pop music is, he says, similar to that of marijuana: You can buy the supplies, but don’t get caught fooling with the substance. In Brooklyn, where Yellow Dogs currently reside, forming a post-punk band with your friends is about as remarkable an activity as ordering Thai food. In Tehran, it was like more like a covert operation. And, lo and behold, the music they produced, the four-song EP Upper Class Complexity, crackles with more life, wit, tension and imagination than most of their peers. Maybe there’s something to be said for having to work for it.

A neighbor told 1010 WINS, "They’re really nice guys. We see them every day."

Update 4: Police Commissioner Ray Kelly said that the shooting suspect "reached the building by hopping from roof to roof and then scaled down the side where he claimed his first victim by shooting him through the window."

#318 maujer street
#brooklyn
#bushwick
#fatal shooting
#murder-suicide
#revenge
#the yellow dogs
Do you know the scoop? Comment below or Send us a Tip