[UPDATE BELOW] The FDNY says there's been a "major collapse" of a building in Brighton Beach this afternoon, and three people are currently trapped inside. A department spokesman confirms that the collapse was reported at 2:26 p.m., and first responders were on the scene in four minutes. It happened at 2929 Brighton 5th Street, but at this time it's unclear what caused the collapse and what size the building was.

Google Street view shows a sleepy street with low-rise bungalows and shacks, and an initial report over the wires says the building was under construction. A complaint was registered with the Department of Buildings on November 5th, claiming "illegal construction" at this address. We'll update as more information becomes available. 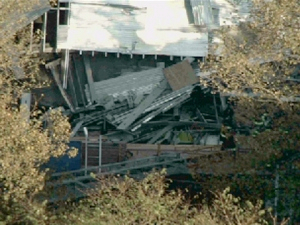 Update 3:24 p.m.: ABC 7 reports that three workers have been pulled out, and one reporter on the scene says "the relief is palpable. Since the third victim was rescued, the situation has calmed considerably." One worker could be seen moving his head as he was lowered to emergency vehicles by rescue workers, CBS 2 reports. The third victim was able to talk to the FDNY, and it's believed that he confirmed that there were just three workers inside.

Update 3:55 p.m.: An FDNY spokesman tells us that one worker is critical condition at Coney Island hospital, another is in serious condition at Lutheran Hospital, and three others at the location refused medical attention.

#brighton beach
#brooklyn
#building collapse
Do you know the scoop? Comment below or Send us a Tip