According to various witnesses, a dolphin has been spotted in the East River—the most heavily trafficked, overly contaminated waterway on the Eastern seaboard—near 96th Street. It was first spotted sometime after 10 a.m., and locals tell ABC that it keeps surfacing. At least one person said they saw it swimming in circles between the Randall’s Island pedestrian bridge and Mill Rock.

According to WPIX reporter Mario Diaz, who is at the scene, the dolphin is still swimming in circles about 300 yards from the FDR, and the NYPD is trying to guide it. "After seeing dolphins all the time in #Florida and #California, this one doesn't appear sick. It's swimming normally. It just needs a #GPS," he tweeted.

We've contacted the Riverhead Foundation for more information about what's happening, and we'll update as we learn more information. Hopefully there won't be any Twitter parody accounts at that time.

Back in 2010, several dolphins were spotted swimming around the East River, but from what we can tell, it's very rare for one to make it this high up on the river. Earlier this year, a dolphin got stuck in the Gowanus Canal and sadly died.

Here's another photo, via Alex Silverman: 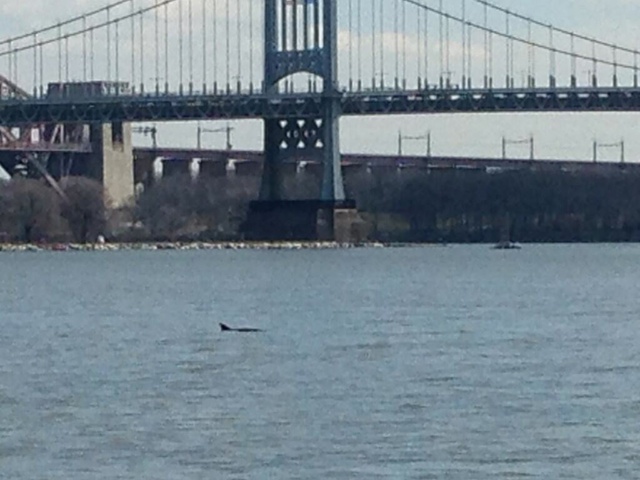 Update: Members of the New York State Environmental Conservation Police are at the scene with the dolphin, who is still swimming in circles. They've confirmed that the dolphin does not appear to be injured; they're not sure if it's a common dolphin or Atlantic bottlenose. According to Wildlife of NYC, "Riverhead Foundation is working w NOAA Fisheries to get more info on East River dolphin & determine if it needs assistance."

Kim Durham at Riverhead Foundation told us that the group is currently monitoring the dolphin, but not much can be done right now: "It is unusual to have them [in the East River]. But based on the behavior, the animal doesnt seem to be in immidate jeopardy." Right now, ttheir biggest problem is getting a better look at the dolphin, because it's swimming around so much. So if you happen to have a good photo of it, please send it to tips@gothamist.com.

The group will continue monitoring the animal for the rest of the day while it tries to get better images. If the dolphin stays in the area overnight, they may try to get a boat to get a closer look: "If he stays in area tomorrow, we certainly would like to get on scene to get better look at him, even if he's free swimming." But she noted it would be difficult trying to herd him anywhere: "Typically they dont go where you want them to go."