Update Below We all know that cats have nine lives...but is it possible that some dogs do too? Or perhaps some dogs have the souls of cats? Because one French bulldog who took a leap off a building on the Lower East Side this weekend and survived with barely a scratch certainly seems to have some innate cat-like qualities.

The incident happened around 11 p.m. on Friday night near Orchard Street between Rivington Street and Stanton Street. A Reddit user with the handle Must Be The Mangoes posted a photo of the aftermath of the jump, and even they couldn't quite believe what they had witnessed.

"So first off, I'm not expecting anyone to believe this. I saw it in person and I'm not sure I believe it myself," they wrote. "I was walking down Orchard st. about 40 min ago and I heard this giant smash alongside a woman shrieking. I naturally thought there was a car accident, as everyone was staring at this silver Dodge Challenger. The crowd gets closer to see the sunroof completely smashed in and a dog standing in the cockpit. 30 seconds pass and a panicked woman comes flying down the stairs of an apartment building, climbs onto the hood of the car and pulls the dog out through the sunroof... as depicted." You can see the photo below:

So this dog just jumped off a roof in the LES and went through the sunroof of a car parked on the street.

The dog had fallen from the roof of a six story building. "The dog wasn't visibly bleeding but was quite shook up and salivating a lot. Still cannot believe it and hope there's a more reasonable explanation," the Redditor, who called it a "surreal and traumatic scene," added. "The bizarre part is that he landed perfectly through the sunroof. An inch to either side and it could've ended drastically differently."

The owner of the dog—whose name is Winston!—chimed in the thread under the handle Heiny And Winst, and confirmed the details of what had occurred: "For those of you wondering exactly how this even happened: his leash was removed before we entered our apartment after going on our nightly walk. Instead of going in our apartment, and for the very first time, he bolted up the next few flights of stairs. The roof access door had been left open and we found ourselves on the dark unlit roof. I tried to get him to come to me but he bolted again, towards the front edge of the building. I saw him try and slow down at the last second but it was too late and he went over the edge."

She said Winston was taken to the nearest animal hospital immediately after, and was placed in an oxygen chamber at the hospital to make sure he was breathing normally. "He has a cut on his hind leg that has been stitched, but miraculously did not break a single bone in his body. I've been told that he has a fair amount of bruising, as to be expected," she added. "It's an absolute miracle that he is alive right now."

You can see a photo of Winston in his oxygen chamber below:

We've contacted the owner to get an update on Winston and how he's recovering since his fall.

Update 2:30 p.m.: Witness Jolie Kerr was hanging out with a friend on Orchard Street on Friday night when she heard a huge boom, followed by glass flying everywhere. "At first we thought we were being shot at," she told Gothamist. She thinks she may have been the person screaming whom the Redditor noted. It turns out she happened to be standing right next to the car when Winston came down. "It was like a bowling ball went through the car."

She saw that the dog was "chilling in the driver's seat like nothing happened. He wasn't in distress, wasn't barking, he really seemed completely fine." When the owner came flying through, she and her friend tried to help her get the dog out—if you look at the photo up above, that's Kerr's hands reaching out toward the dog and owner (her body is blocked in the shot). She got cut up by the glass on the car, and covered in blood, in doing so.

Hi no joke I just watched a dog fall off a roof into the sunroof of a car. The dog seems okay? His people got him and are taking him to be looked at but holy shit. This is my arm rn. pic.twitter.com/TEj1wF702g

While she left to clean up the blood, her friend stuck around for a bit to leave a note for the owner of the car. "I told him, they're gonna get this note and think it's a joke. 'A dog fell from a roof into your car?'" The owners appeared and, as Kerr predicted, didn't believe a dog had crash-landed through their sunroof. But they ended up watching surveillance video of the incident taken by a store across the street and saw it go down.

As for Winston, Kerr has a happy update: she talked to a friend in the neighborhood who knows the dog and its owner, and he's doing well: "He's fine! He literally only had a few bruises, that was the worst that happened."

She added, "All New Yorkers are terrified of air conditioners falling on them. Now I'm afraid of an animal falling off a building and onto me! It's a whole new specific New York fear to have." 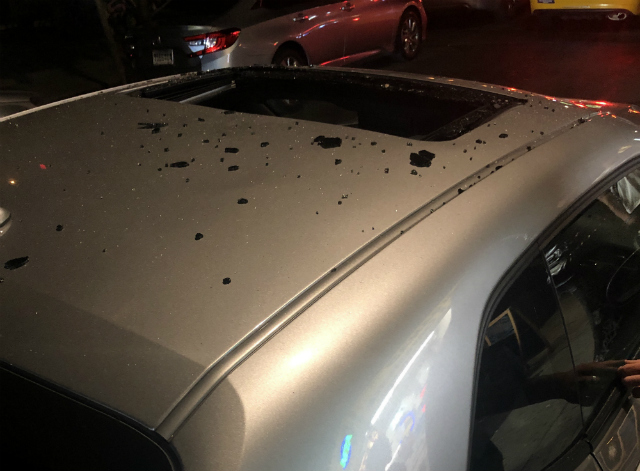 #dog
#french bulldog
#LES
#Lower East Side
#miracles
#winston
Do you know the scoop? Comment below or Send us a Tip