At a press conference in East Harlem today, Mayor de Blasio confirmed that a gas leak is believed to have caused a massive explosion this morning that leveled two buildings, killing two and injuring 22 others. [UPDATE: As of 4 p.m., the FDNY put the injured total at 24.] Flanked by Fire Commissioner Sal Cassano, City Council Speaker Melissa Mark-Viverito, and other officials, de Blasio said, "This is a tragedy of the worst kind because there was no indication... The only indication of danger came about 15 minutes earlier when a gas leak was reported." Update, 7:15 p.m.: There are now three fatalities confirmed.

In addition to the two fatalities, two people are currently hospitalized with life-threatening injuries. Officials say five others have serious, but non-life threatening injuries, while 15 others sustained minor injuries. The fire is still at five alarms, and the FDNY continues to work to contain it; 250 firefighters are at the scene, and Commissioner Cassano told reporters, "Right now, fire marshalls can't get anywhere near the source of ignition," which is currently believed to be in the basement of one of the buildings. 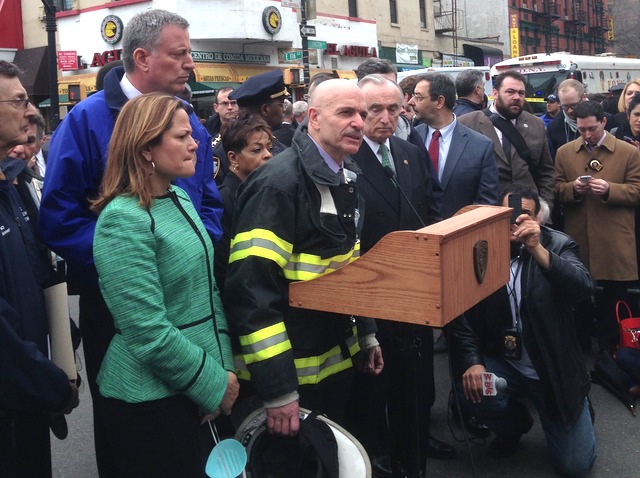 1644 Park Avenue had six residential units, while 1646 Park Avenue had nine. First responders are still trying to confirm who may or may not have been in the buildings when they collapsed. Con Ed chief John McAvoy said Con Ed received a call reporting a gas smell at 9:13 a.m. and dispatched crews at 9:15 from the north. Based on the reports available to ConEd, McAvoy said this leak report "did not meet the threshold of severity to be reported to the fire department as a serious danger."

Commissioner Cassano said the FDNY was called at 9:31 a.m., adding that "we had our first unit on the scene at 9:33." Cassano also added that "if the FDNY was there five minutes earlier there could have been firefighter fatalities." Although firefighters are still working at the scene, Cassano said that at this point air quality is the only concern in the immediate vicinity of the buildings. But the situation is still very "precarious," and the cleanup will be "a long extended operation." 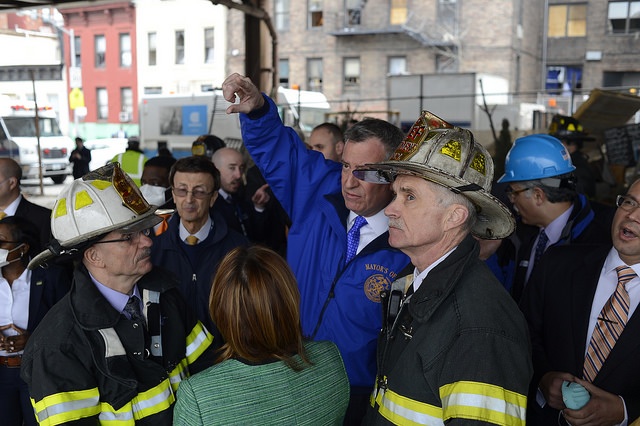 Con Ed is currently in the process of cutting gas lines to the building. The Red Cross is at nearby PS 57 to assist displaced residents find shelter, and de Blasio urged anyone seeking information about missing friends or loved ones to call 311.

Speaker Mark-Viverito, who was en route to the City Council when the explosion occurred, told reporters, "My district office is literally half a block from the explosion site... Obviously it's an extremely anxious time for the constituents that live here, for the families that have been impacted… We have made our district office a command post for first responders."

#con ed
#de Blasio
#east harlem
#explosion
#gas leak
#harlem
#original
Do you know the scoop? Comment below or Send us a Tip
A new Gothamist is coming! We’ve moved comments over to our beta site. Click here to join the conversation and get a preview of our new website.