[UPDATE BELOW] A 29-year-old Brooklyn woman was killed while bicycling through Bushwick last night. According to the NYPD, Erica Abbott, a 29-year-old dancer who earned her BFA at SUNY Purchase, was biking southbound on Bushwick Avenue around 7 p.m. when she fell off her bike and was fatally run over by a 34-year-old woman driving a Mercedes-Benz (see below). Abbott was pronounced dead at Woodhull Hospital.

No criminality was suspected and the unidentified driver was not charged. Witnesses tell the Daily News that Abbott was biking "through a construction site" near Powers Street when she "suddenly lost her balance near a pile of loose wood on the street after a car horn honked and she turned her head." Abbott, who was wearing a helmet, fell toward traffic and was run over, according to witnesses.

"Somebody took her shirt off her back to stop the bleeding," one witness adds. The driver stayed at the scene and was not charged.

I'm not sure if this information will help with anything, I just picture some idiot commenting and saying "who drives a bike through a construction site." I live on Bushwick Ave and there is a new condo building going up. There were 2 wooden barricade type structures to block off an area. They were both in the street next to the sidewalk, but one blew over with the storm over the weekend and was in the way of any biker or car for that matter. I have no idea why it wasn't picked up Monday or Tuesday. I can see how you wouldn't even see it if on a bike. It would put you into harms way if you were trying to swerve around it. Now we have lost someone and an ugly condo is going up. Really not fair. 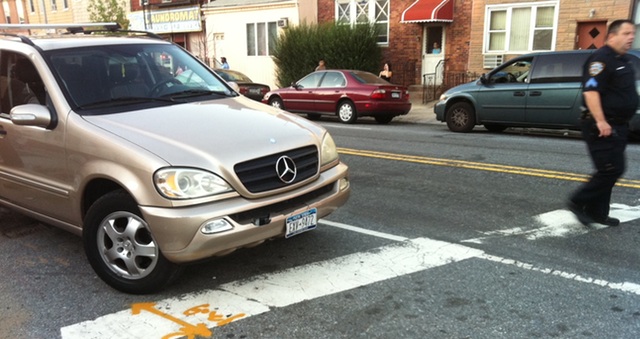 The Mercedes involved in the fatal accident.

#bicyclist
#brooklyn
#bushwick
#cyclist
#cyclists
#erica abbott
Do you know the scoop? Comment below or Send us a Tip