[UPDATE BELOW] A cyclist was killed after being struck by the driver of an 18-wheel truck in Park Slope this morning.

The crash occurred just before 8 a.m. at the intersection of Sterling Place and 6th Avenue, neither of which are truck routes. Neighbors at the scene said that truck traffic on 6th Avenue has gotten much worse since the Atlantic Yards development. The NYPD's 78th precinct hasn't issued any tickets for truck route violations to date this year. 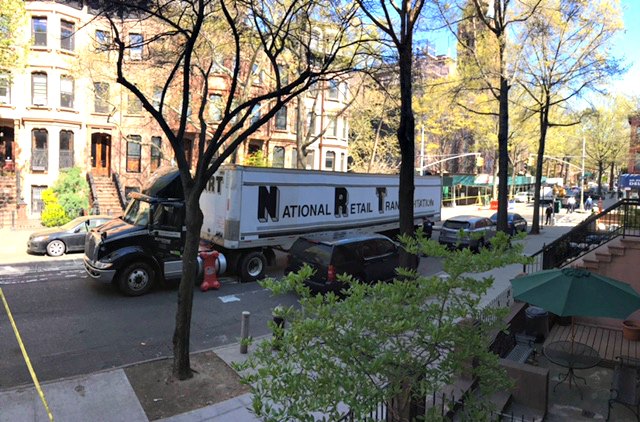 Police said that they are still looking into the crash, but confirmed that the male cyclist, 33, has been pronounced dead. They are questioning the driver of the truck, and no arrests have been made yet. According to witnesses, the entire block was still sectioned off as of 9:10 a.m.

Michelle Kislak said that she was jogging north on 6th Avenue when she heard a woman's urgent scream through her headphones, and turned to see that the truck right next to her had run over the cyclist.

"My first thought was maybe it was this woman's dog or something because I couldn't see, and by the time I saw what had happened the man was laying in the crosswalk in the intersection," Kislak told us. "His head was bleeding, his arms were not the way that arms are supposed to look, and he was definitely unconscious. My first thought was, this man's dead. It was incredibly horrible." 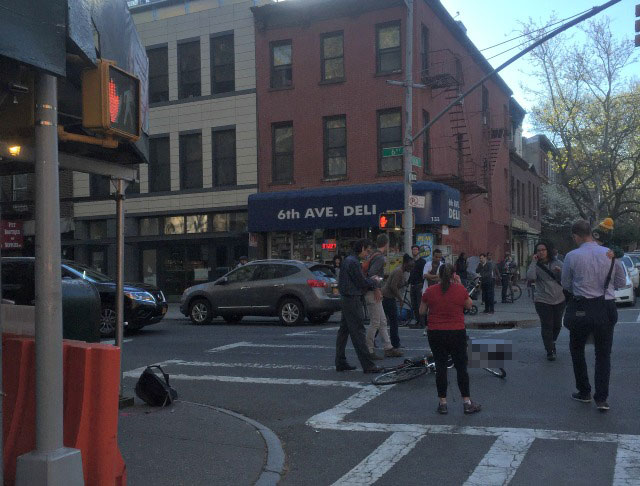 The crash occurred right outside the 6th Ave Deli, and Kislak said that several people came out of the bodega and multiple people called the police, who arrived within about five minutes. Another witness said that there were five police cars and one ambulance on the scene at around 9 a.m., and a number of parents were trying to keep their children from seeing the gory scene—the crash took place two blocks from PS 282.

Rob Underwood, a parent at PS 282, came across the site just after the crash, and helped Rashan Hoke, the principal of PS 282, direct children and parents toward alternate routes.

"I don't think we stopped them all, there are definitely kids who saw the body and saw the accident, but hopefully we were able to divert some kids from seeing it," Underwood said, adding, "The driver was being interviewed by a police officer when I walked by. He looked upset."

Paul Steely White, Executive Director of Transportation Alternatives, said that while the details of the crash are still emerging, it does appear that the driver was acting illegally in perhaps two ways: first, by driving a truck longer than 55 feet (which requires a permit) on a non-truck route, and second, if a witness's report is correct, by driving with headphones on. (Neither police nor the FDNY could confirm the latter.)

"Hopefully all of the responding officers are not engaging in irresponsible speculation until the investigation is done," White said. "That's something we've seen time and again, is that kind of early bias against pedestrians and cyclists, that they somehow had it coming or were engaging in risky behavior, when more often than not it was a lawless driver who was responsible."

Update, 12:30 p.m.: Police say that their investigation so far has shown that the cyclist, identified as James Gregg, was biking south on 6th Avenue next to the truck and hit its rear tire. The truck was driven by a 47-year-old man, according to the police. No arrests have been made, and the NYPD is still investigating.

#cyclist fatality
#cyclists
#truck
#vision zero
#original
Do you know the scoop? Comment below or Send us a Tip
A new Gothamist is coming! We’ve moved comments over to our beta site. Click here to join the conversation and get a preview of our new website.