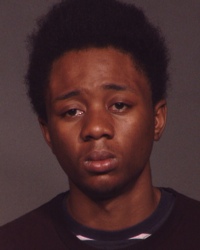 Police are looking for an 18-year-old who was caught on video assaulting a woman—who was carrying a three-month-old baby—in order to steal her phone. Update below: Police have made an arrest.

According to the NYPD, the robbery took place on Friday, November 28, 2014 at 12:45 p.m., in front of 1155 East Tremont Avenue. The suspect, who police identify as Alonzo Brown, apparently targeted the 24-year-old woman, who had the baby strapped her to chest.

Police say he then approached her and "kicked the woman causing her and the child to fall to the ground. Brown took the woman's cell phone and fled the location on foot."

The woman and baby were taken to Jacobi Hospital for treatment and were released.

Police released a photo of Brown as well as surveillance video of the incident:

WABC 7 spoke to the victim, "She wouldn't show her face and wanted to be known only as Odilia, but she said her 3-month-old son, Jordy, is safe despite her landing on top of him. He was snuggled into a sling when the kick came out of nowhere."