We're seeing reports on Twitter that protesters from Occupy Wall Street have marched down to the Brooklyn Bridge, and hundreds of people have begun to stream into traffic lanes, completely stopping traffic on the bridge. According to NY Times reporter Brian Stelter on the scene, "Scratch that: a LARGE # of protesters are in lanes of traffic. Traffic out of Manhattan is now completely stopped." [Watch live video stream below]

Gawker's Adrian Chen, who is also down there, wrote, "Shit, they're shutting down the brooklyn bridge," and also tweeted a picture of the Brooklyn-bound lane completely blocked. We'll update as we hear more about what's going on by the bridge.

Update 4:26 p.m.: Police have no arrived on the scene and have started arresting protesters en masse: "Police going to make mass arrest on Brooklyn bridge," tweeted Jeff Rae. According to @jopauca, "Two white shirts just beat someone. Someone has video." There are also reports that police have blockaded both sides of the bridge now and taken out the nets.

You can watch a live video stream of what's going on below:

Update 4:40 p.m.: Protesters are chanting "Let us go" as police have begun arresting people, seemingly at random. In one striking image, cops could be seen arresting a young looking girl (15-18 from what we can tell), and people are screaming that they are arresting a "little girl" for no reason (at least one person identified her as 13, but we can't confirm if that's true). You can see a screen shot of her below. 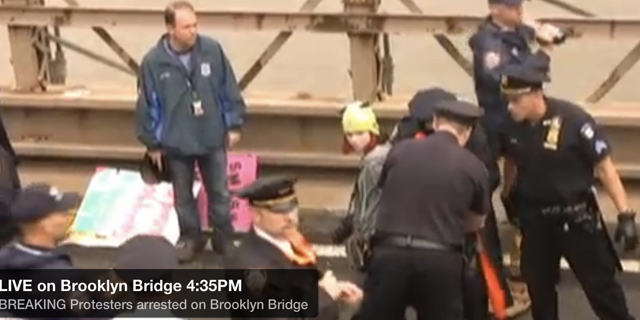 You can also see a picture, via Anjali Mullany, of protesters packing into the bridge before: 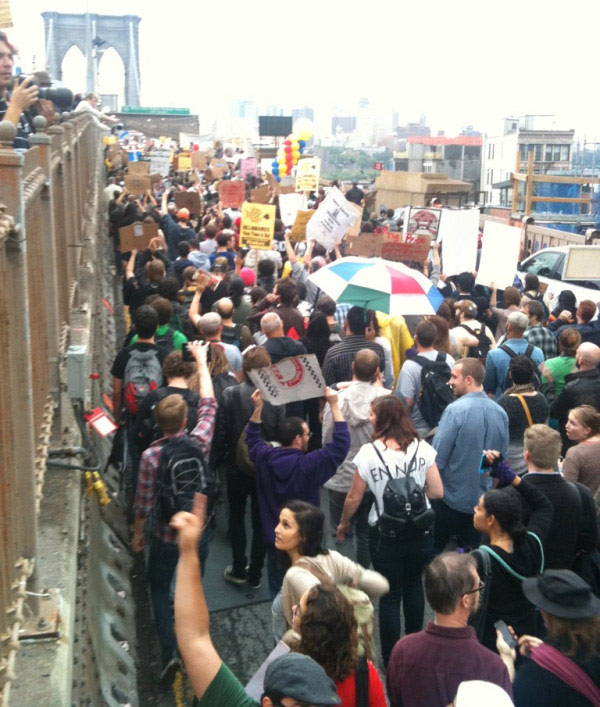 Update 4:50 p.m.: We just saw Hero Vincent, who has been assisting the organizers at Zuccotti Park this week, being arrested by police. Below is another picture that shows several cops arresting a single person, surrounded by a huge number of protesters: 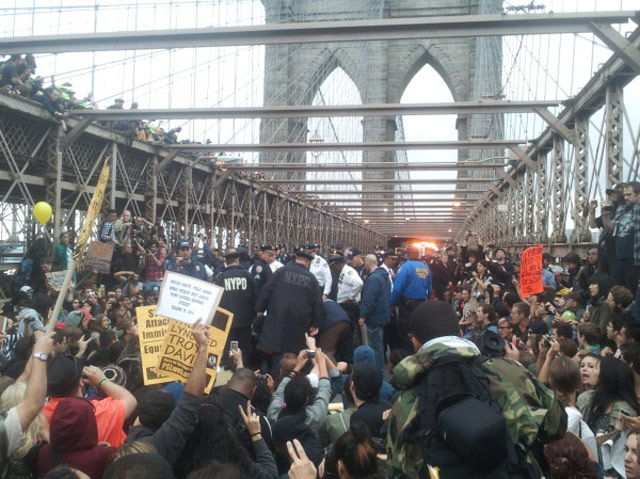 Update 5:00 p.m.: Things seem to be getting more dangerous down at the bridge for everyone involved: according to @jopauca, "NYPD keeps moving line forward. Its getting really hard for ppl to breathe." In addition, Chen tweets, "Caravan of police buses heading to the bridge. Have a feeling they arrested a bunch of stragglers."

Update 5:15 p.m.: While many protesters have left the bridge, or made it across to Brooklyn, some are still there and are being arrested one-by-one by police. @Jopauca is live-tweeting the arrests, including his own: "I'll be arrested momentarily. See ya'll soon." According to Andres Gutierrez, "#nypd taking mugshots on the spot of #occupywallst protesters on the #brooklynbridge." You can see a pic below: 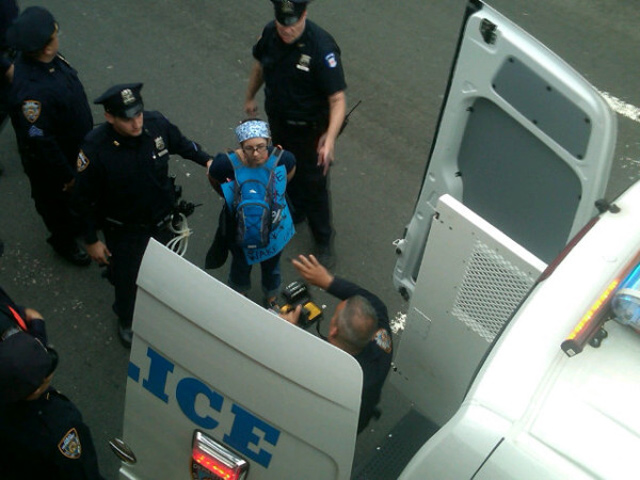 NotifyNYC is understatedly reporting: "Due to police activity, BK-bound traffic is temporarily suspended on the BK Bridge. There are also extensive delays MN-bound."

Wikinews is also reporting that,"Natasha Lennard, a lead contributor for the New York Times, has been arrested on the Brooklyn Bridge in New York City."

Newyorkist, who has been reporting from Zuccotti Square all week, clarified who police let leave the bridge: "FYI: Before mass arrests started & shortly after protesters were trapped on either side, police were letting people walk out."

Devereaux just added, "One woman just said, "they've turned the BK bridge into a jail"' and also tweeted, "Source on bridge says, "a couple hundred," still waiting to be loaded into NYPD vans."

Slate and MSNBC reporter Dave Weigel tweeted the photo below of the Manhattan entrance to Brooklyn Bridge: 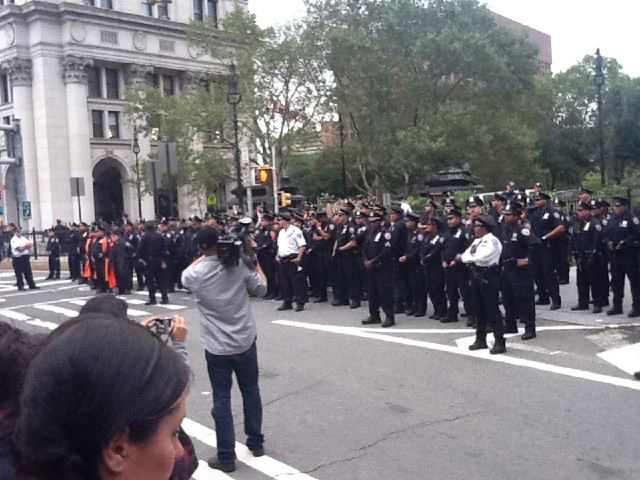 Update 6:00 p.m.: According to our reporter on the scene, Christopher Robbins, NYPD are using MTA buses to load more arrested protesters, in addition to at least three "paddy wagons." There are "easily 100 NYPD officers" at the mouth of the Brooklyn Bridge (as you can see above). Even though the bridge is blocked off at the entrance, protestors are threatening to march on it again anyway—as you can see in a picture from Brian Stelter below: 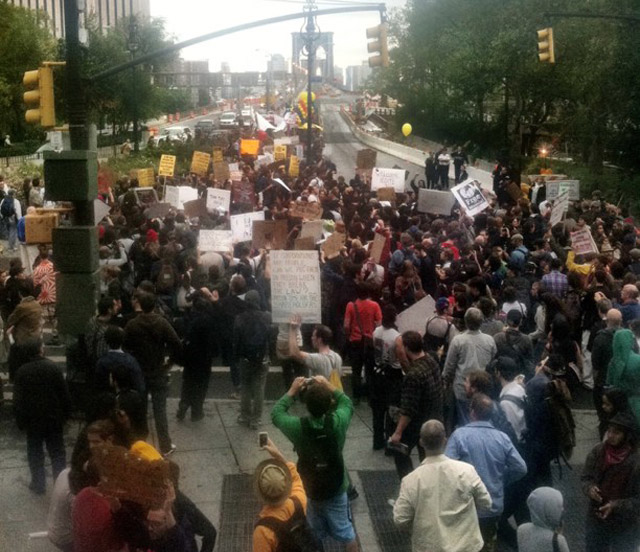 Update 6:30 p.m.: J.A. Myerson, who has been tweeting from the protest on the bridge since it started, provided some info on the number of arrests thus far: "CONFIRMED by Marina at legal: 72 arrests. Finding out about demographics, specifically gender" and followed that with, "Safe number, I'm told, is 100 arrests, and more ongoing."

The Times gives an update on their reporter who was arrested: "Times freelancer @Natashalennard, 6:08 p.m. "On bus of arrestees on way to central booking I think."' They further clarified where those "paddy wagons" were coming from: "As many as 10 paddy wagons, big enough for 20 prisoner each, were dispatched from Rikers Island to the bridge."

Chris tells us that the crowd is now headed toward 1 Police Plaza to continue their protest-but some are still stuck on the bridge getting arrested. You can see a picture from the bridge of police, just before protesters began to leave, below: 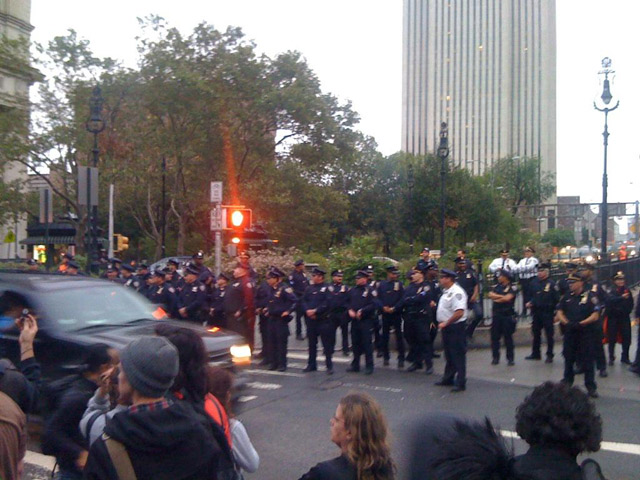 Also, check out this photo of a wedding couple crossing paths with OccupyWallStreet protesters on the bridge, before the arrests began: 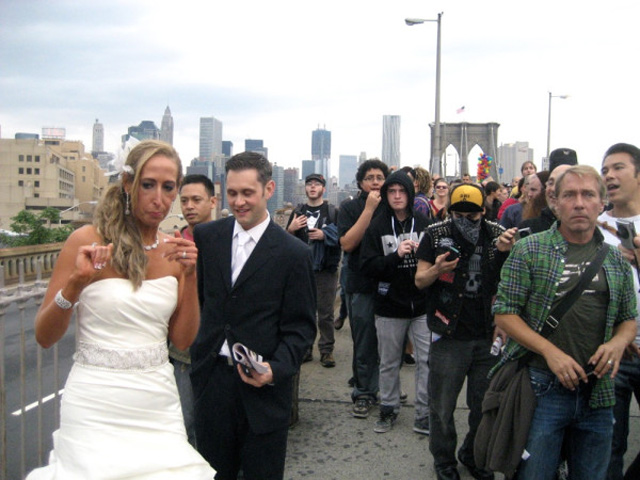 Update 7:00 p.m.: Between the rain and the cops blocking off the bridge, protesters seemed to be at odds over where to go. At first, a large group headed to 1 Police Plaza, but after they received confirmation that their arrested "brothers and sisters" were headed to central booking in Chinatown, people were split between going back to the bridge, to central booking, or regrouping at Liberty Plaza. 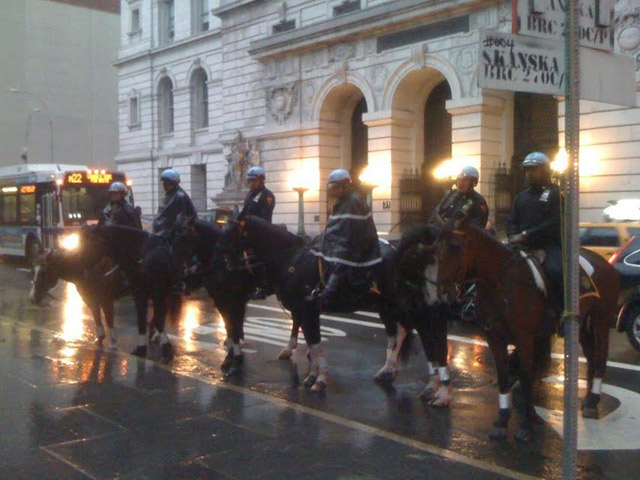 In the end, they returned to the bridge where they confronted police, who are still blocking off the entrance. According to J.A. Myerson, a media coordinator for Occupy Wall Street, people were still being arrested on the bridge at this time: "Police officer told @kristengwynne that there were less than 150 people left and they're all lining up to get arrested." The number of arrested has ballooned way past initial estimates, according to the Times: "Police now saying several hundred arrested."

Protesters at the scene are telling us that police have been letting some women leave the bridge, while arresting most of the men. One said, "They weren't letting us leave. I needed to pee and the officer said 'no.' Then he said, 'pretend that you're sick and ask that guy [in the white shirt]', so I did and I walked away." Three other women told us similar stories, and that they were told by officers to hold hands and walk away.

Update 7:20 p.m.: Police are now being accused of "kettling," or entraped, protesters on the Brooklyn Bridge as an excuse to arrest them en masse. Alex Amend tweeted, "FTR: The NYPD, god bless em, opened the roadway in order to entrap. March was peacably proceeding over the footpath." Gawker's Adrien Chen, who just escaped the bridge without being arrested a few hours ago, responded to the accusations: "I don't know for sure NYPD let protesters over the bridge to kettle them, but they blocked the road at first, then abruptly stopped."

Ryan Devereaux tweeted that the officers he dealt with acted professional, but did add: "Many involved today have made point of saying some blueshirts cops seemed uncomfortable w/ what they were ordered to do."

The NY Times spoke with 56-year-old protester Etan Ben-Ami, who agreed that police seemed to make a conscious decision to allow the protesters to take the road: “They weren’t pushed back. It seemed that they moved at the same time...It seemed completely permitted. There wasn’t a single policeman saying ‘don’t do this.’”

C. Szabla makes the point that the protesters didn't understand what their rights were in regards to the bridge: "#occupywallstreet people now realizing was illegal to be on bridge, claiming NYPD channeled them. earlier exclaiming they "took" the bridge."

Update 8:15 p.m.: The police are now saying that approximately 400 protesters were arrested today; they were taken away in several Department of Corrections buses and at least one MTA bus. 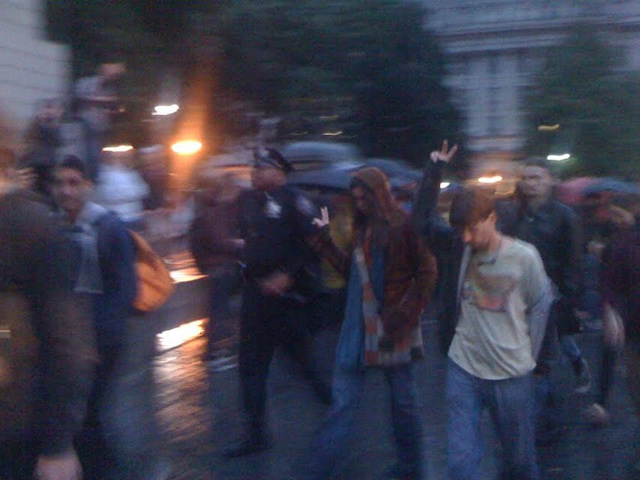 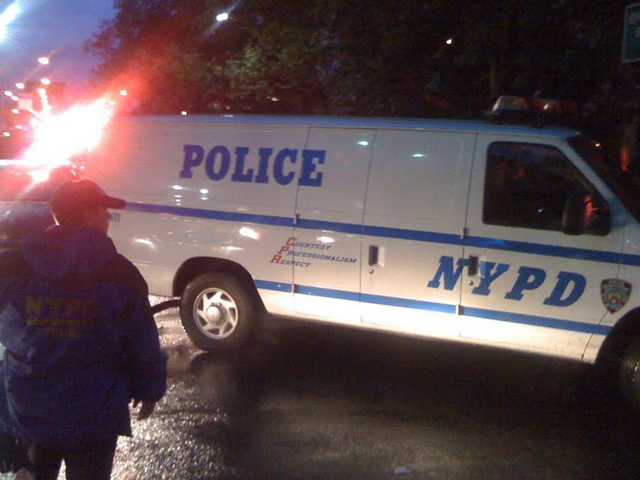 Christopher T. Dunn, of the New York Civil Liberties Union, was walking with protesters when they were met by police at the bridge; he says they announced repeatedly through bullhorns that the marchers were blocking the roadway and that if they continued to do so, they would be subject to arrest.

However, we spoke to two of the last people who were released—not arrested—from the Brooklyn Bridge this evening. Megan Hanley of Kensington, and Sophia Mascia of Astoria—who has been living in Liberty Square for the past three days—both corroborated the accusation that police "tricked" protesters into walking in the walk.

They told us that initially, most people were walking on the pedestrian walkway on the bridge. Cops let them onto the road—most stayed on the walkway, but some stayed on the road. Halfway on the bridge, cops blocked off marchers from both sides, and wouldn't let them go any further. The nets were taken out, and things tense for a bit. People then began to sit down, to imply to the officers that they wouldn't move: 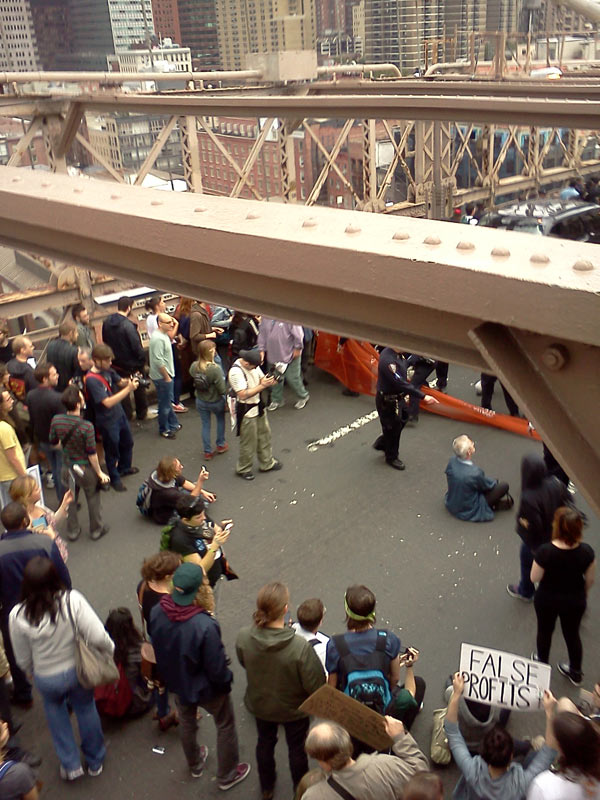 That was when they say the arrests started—they say police just started picking people to arrest one by one arbitrarily, in no discernable order. Neither saw anyone resisting arrest, nor any violence. They said that men and women weren't separated till the very end. At that point, all the people left were in two separate lines by gender. Officers began letting a few of the women go, but another police officer made them stop, and arrested everyone left there.

Update 9:00 p.m.: Police now say that more than 500 people were arrested over the course of the day: "More than 500 were arrested on the Brooklyn Bridge late this afternoon after multiple warnings by police were given to protesters to stay on the pedestrian walkway," a police spokesman said.

Protesters have settled into Liberty Park for the evening—15 Marines are reportedly on their way to protect protesters—and make plans for more marches (and Drag Queen shows!) tomorrow. We'll have more coverage—including pictures, interviews with protesters, video of the arrests, and more—tomorrow. Until then, here's a short video to end the day: protesters chanting the Beastie Boys' classic "No Sleep Till Brooklyn" at cops on the bridge.