Update: City To Be Encased In Solid Block Of Ice During Freezing Snowy Weekend

New Yorkers haven't forgotten that the city was somehow caught completely off-guard (despite touting how prepared they were days before) during the November snowfall that snowballed into a traffic nightmare. And with two snowstorms expected to hit the city over the next couple of days, the city is not going to stand idly by and allow another situation to occur that leads to 6+ hour long commutes.

Or uh, hopefully not: "We learned from that event, we're all leaning forward a little sooner now," said NYC Emergency Management head Joseph Esposito today. He said that the city was doing "everything sooner" because of November's incident—he would not make any promises about having another snow disaster, but he did say he thought they would be more ready this time.

[Thursday morning update] - Snow is in the forecast for late tonight into Friday morning. Accumulations will range from a coating to an inch across Long Island to 1-2 inches north & west of NYC. Slippery roads may impact the Friday morning commute, especially across the interior. pic.twitter.com/h8WZ6MZEXF

So what do they need to be ready for exactly? According to the National Weather Service, snow will start tonight around 7 p.m. (a Snow Alert has been issued) and we will get 1-3 inches tonight. Although there is a travel advisory in effect for Friday morning, whatever falls tonight is expected to dissipate by Friday afternoon, with temperatures expected to go up to the 40s. Nevertheless, there will be over 700 salt spreaders and 1,000 plows at the ready for this downpour.

Today will be cloudy but dry with a high of 34 degrees until about 7pm, when we expect a winter storm to roll in and bring a mix of rain and snow. This will last into the morning and will cause slippery conditions. Plan to stay indoors and use public transit as much as possible. pic.twitter.com/uOWWprMYyA

While that's really no big deal, the bigger concern is about the weather over the weekend. Department of Sanitation Commissioner Kathryn Garcia noted there was "a lot of uncertainty" over what exactly will happen during "the main event" over the weekend. She called it a "challenging event," because accumulations are very wide in terms of possibilities because of the steep temperature changes—it's going to get into the negative temperatures from Sunday night into Monday (overnight lows will be around 10 degrees Sunday into Monday, with wind chills at 5-to-10-below zero).

Perhaps the biggest weather story unfolding for NYC is the Dangerous Cold on the way. Snow Saturday night could accumulate briefly but look at the Arctic Blast that arrives Sunday night and peaks on Monday. pic.twitter.com/118nSyRBtQ

As of now, the snow is expected to hit late on Saturday, then turn into rain and a wintery mix Sunday, before freezing on Monday. There will be over 16,000 plows available to face whatever comes this weekend. Garcia added that "snow [will turn] into freezing rain into sleet into rain into snow, then drop 30 degrees into the single digits" by Monday morning. As Esposito emphasized, "whatever is out there is going to be complete ice on Monday."

So they both seem very confidant tonight's snow will be no big deal, and a little less confidant about what we may be facing this weekend...which could also end up being nowhere near as bad as the worst reports are implying. If that sounds like a bit of whiplash, then just imagine how I felt watching the press conference play out while getting dosed by the DSNY Facebook feed: 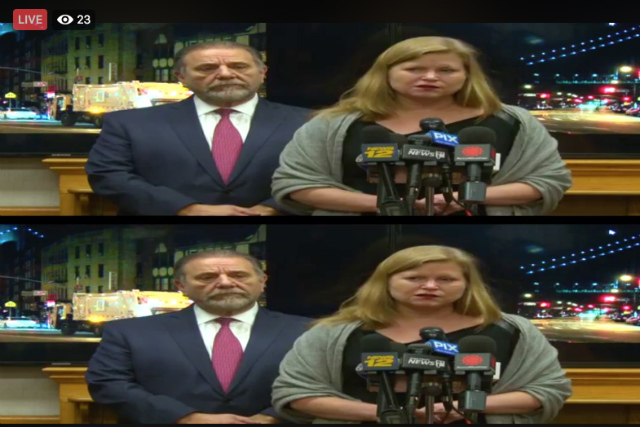 #snow
#snow panic
#weather
Do you know the scoop? Comment below or Send us a Tip