[UPDATE] Every so often, a Citi Bike strays far from its natural habitat—how did this Citi Bike wind up on the Bronx-bound 6 train, or in the backyard of this Jackson Heights house party? Was it an accident? Has global warming altered its natural migration patterns? Did its owner black out again?

Those with good Samaritan inclinations will be tempted to help, but one Hamilton Heights resident has learned the hard way that no good deed doesn't turn into a massive pain in the ass. Rich Ward, who lives around 100 blocks from the nearest Citi Bike dock, emails us with the following story:

Friday morning I went out for my usual early morning run. I was out of the house around 6am and headed down to the Hudson river. I was surprised to run by a Citi Bike leaning against the stairs on the river side of the footbridge (148th St.). Park vehicles and NYPD cars are usually driving along the river path so I figured I would let them know when I saw one.

An hour later and no vehicle sightings (it was foggy out and no one was around) as I was finishing my run I returned and the bike was still leaning forlornly against the railing at the foot of the stairs. I decided it would be the right thing to do to lug the bicycle back to my building and call Citibike to have them pick it up. I left the bike inside our building so it would be safe.

By 7:30am on the 13th I had rung 1-855-BIKE-311, given the individual on the phone the five digit number and address and he assured me that a truck would come by straightaway to pick up the bike.

By close to 4pm no one had picked up the bike so I called a second time. The individual on the phone thanked me again, apologised and assured me that someone would pick up the bike soon.

By Saturday afternoon the bike still had not been retrieved and I rang a third time. I told the individual on the phone that it had now been over a day and a half and my neighbors were starting to ask about the bike taking up space by the front door of our building. And here is where it gets weird: the individual on the phone explained to me that it takes a long time to pick up bikes because so many get stolen and they can't keep up with them!

In March, Alta Bicycle Share was forced to lay off workers whose job it is to maintain the bikes and docks. As a result, Citi Bike's rates of repair and maintenance has dropped precipitously—in December, only 34 percent of bikes were given their required monthly once over, and in January, only 37 percent were looked over.

As of this morning, the bike is still in Ward's possession, and Citi Bike has yet to attempt to collect it. Citi Bike has not returned a request for comment. In the meantime, if you've been charged $1,200 for bike 04637, drop us line! We're curious why you left your bike for dead, and why you were so eager to relieve yourself of all that cash!

Update, 3:10 p.m.: Three days is one thing, but Mark Risman wrote to tell us about a Citi Bike he's seen chained to some scaffolding on Broadway between 84th and 85th streets for more than a month. After posting a note to Citi Bike's Facebook page May 23, he was instructed to send an email with the bike's location. Not only is the bike still there today, it's made a friend! 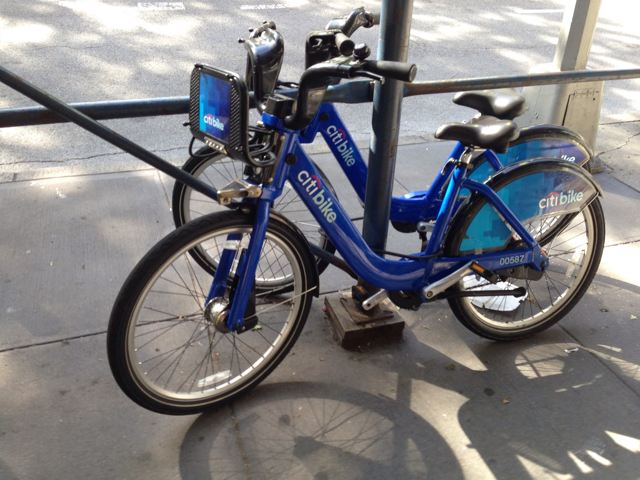