A four-alarm fire broke out at Kings Plaza Mall in Brooklyn this morning, and although reports differ as to the blaze's source and precise location, media outlets and eyewitness accounts point to cars burning in the mall's parking complex.

#Photos: A massive fire in the parking garage of Kings Plaza Mall in Brooklyn. The mall is currently being evacuated. pic.twitter.com/wqBV9NzsP2

Parking garage at Kings Plaza Mall in Brooklyn has caught on fire, the FDNY says. No reported injuries. Cause of fire under investigation. pic.twitter.com/eS0EAPgH0b

An FDNY spokesperson confirmed that a fire had been reported at 5100 Kings Plaza around 8:30 a.m. on Monday, but could not say whether the fire originated in the parking garage. Initially, however, a tweet from the FDNY Alerts account acknowledged "multiple vehicles on fire on two [floors] in the parking garage."

Photos from witnesses show thick, dark smoke billowing from the mall's parking garage, and attest to audible "explosions" coming from the structure.

No injuries have been reported, and the FDNY emphasized that its investigation is ongoing: we will update this post as we learn more.

UPDATE: The FDNY confirms that "multiple vehicles on multiple floors" of mall's the four-story parking lot caused the fire, which has been upgraded to a seven-alarm fire requiring response from over 50 units comprising over 200 firefighters. The conflagration is now under control, but according to the FDNY, 21 people sustained non-life-threatening injuries: 18 firefighters and three civilians.

UPDATE: Twitter user @NuffSaidNY, a college student from Brooklyn, says he was waiting on the bus outside a nearby Mattress Firm around 9 a.m., when he saw "a gigantic smog of black smoke" erupt into the sky. "I was there the whole time," he said. "The traffic was backed up, so I just decided to record and take pics." He’s been sharing diligent and detailed updates all morning.

"I heard loud explosions like bombs going off," he tells Gothamist. "The commissioner says those noises may have been tires exploding. I honestly thought it was a terrorist attack."

At first, he noted, just a few firefighters showed up, but more and more arrived every 15-or-so minutes until they numbered in the hundreds: "I've never seen that many [firefighters] in my life."

UPDATE: Authorities suspect Monday’s car fires to have been the result of arson, and have obtained security footage of a suspect leaving the scene, the NY Post reports. As our tipster, @NuffSaidNY, pointed out on Twitter, some local car dealerships—including Mercedes Benz of Brooklyn—keep vehicles in the Kings Plaza parking garage. According to the Post, some of those Mercedes went up in flames this morning.

UPDATE: Police have released a photo of a "person of interest" in the investigation, who was captured on camera "in the vicinity of the location around the time of the incident." He is pictured wearing dark pants and dark shoes, with a white T-shirt slung over his shoulder. 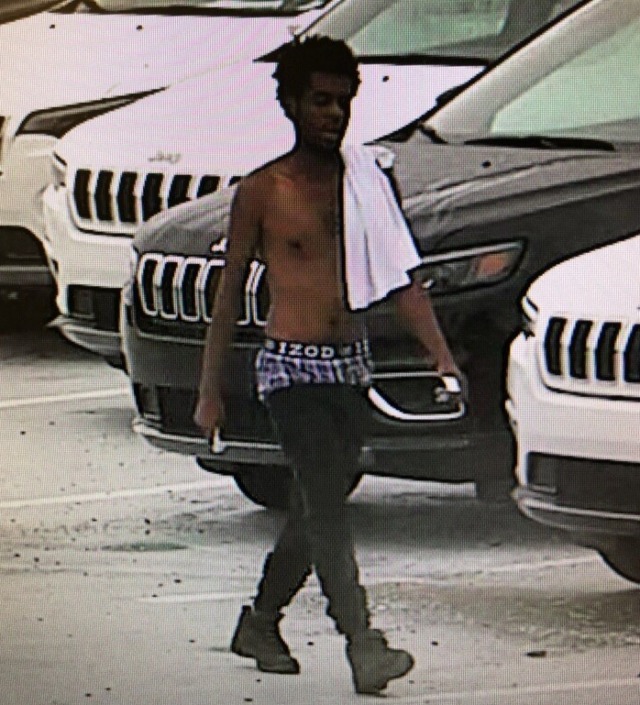 #fdny
#fire
#kings plaza mall
Do you know the scoop? Comment below or Send us a Tip