[UPDATE BELOW] So your train was delayed—but why? The reasons are manifold, but if you are stuck atop the 7 train platform while the freezing ice daggers pelt you in the face, there are, at least, two good justifications: At 9 a.m., an errant umbrella sat burning on the third rail near 52nd Street in Woodside. At 9:30 a.m., the third rail at Queensboro Plaza froze over, cutting power to the line and forcing the MTA to halt trains in both directions.

According to a tipster, the rogue umbrella brought the train to a halt around 9 a.m., forcing a duo of MTA workers to go out there and get it. Blame either the piss jar who threw their umbrella, or Mother Nature for ripping it from someone's unsuspecting hand.

The business at Queensboro Plaza is unrelated and as yet unresolved. Residents of Queens, if you're reading this: STAY INSIDE, or become one of the Livid Tweeting Masses:

You fucks just can't get it right, can you, @MTA @Gothamist pic.twitter.com/H9fhsb1RxM

Here's hoping the Gothamist will ream @MTA a new asshole in their next edition... @Gothamist pic.twitter.com/P9VcqDDR7Y

Evacuating the train car but I made a promise that I would never leave pic.twitter.com/eWLeQtRmxp

I think we can all agree that this was a horrible morning to be outside. Let's go back to bed and try it again tomorrow.

Update, 11:45 a.m. A 7 train prisoner managed to smuggle out the following update on the train's status. Here is her tale of woe, quoted exactly. May God have mercy on her soul.

This is my third 7 train of the day. Earlier they had us get off and get on a different 7, due to mechanical issues, then I had to switch trains and go away from Manhattan to get to an express train. I left my house at 815 this morning, and yes, I am still on the train. My commute is normally 6 stops, 23 minutes door to door.

There were tons of people waiting for that one, so we all jammed into the express train with the promise we'd get there. I was one of the last people on, so I'm standing. I have been on this particular train since 9:45. We didn't quite make it to our next stop before we stopped and sat.

The announcements I have heard this morning are:
-We are delayed due to an investigation
-We are delayed because there is something on the 3rd track
- This train is having mechanical issues, please get on another one.
- The train in front of us is stalled
-The train in front of us has no power, everyone move to the back of this train so we can add those passengers to this train
- Nevermind about the other passengers, we're going back to the last stop.
- We have to wait for all the trains behind us to go to the last stop before we can go, it's going to be a long wait, thank you for your patience
- The train in front of us might have power again
- No they don't, there's only 2 more trains to move before we get to go

... That's what I know so far, we are still sitting waiting to go back to the previous stop.

This train is shoulder to shoulder packed. No mutiny, but some people are mad that no sitting people have offered their seats to switch with those who have been standing for 1.5 hours. I'm personally annoyed at people who are chatting loudly on their phones or listening to loud music. No man spreading that I can see... So that's good. 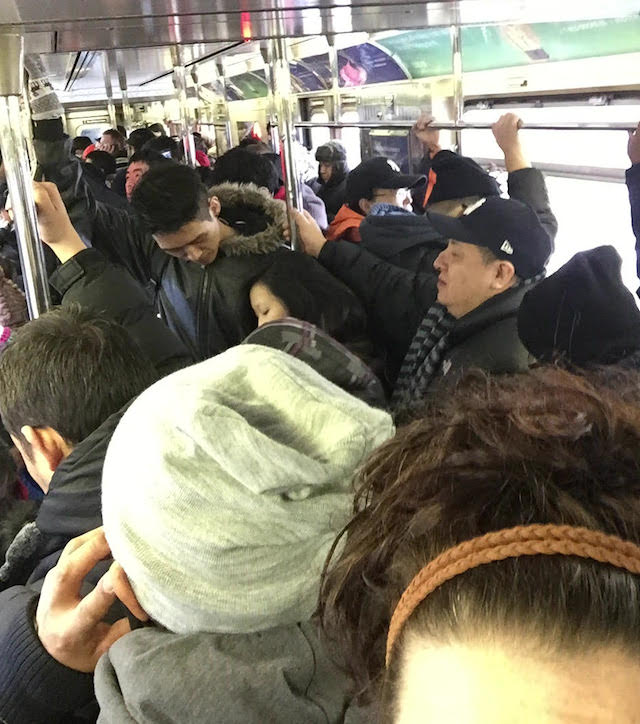 Update, 12:50 p.m.: After three hours, 7 train straphangers have been successfully rescued from their mobile prison. Is the fun over yet? No.

As for our tipster: "Got off 7 at 11:45 to the announcement that there was no service in either direction. That's 3 hours for a typically 23 minute commute. There are no cabs or uber available and this is the cluster waiting for some kind of bus or shuttle. In conclusion: I'm going home to binge on Netflix."

Do it, girl. You deserve it.

#7 train
#delays
#MTA
#original
Do you know the scoop? Comment below or Send us a Tip