[Updates below, including a photo of the dog!] An unidentified man fell onto the trackbed with his dog and survived being run over by a train at the A/B/C/D subway station at West 125th Street and St. Nicholas Avenue. An FDNY spokesman confirmed that the man was rescued from the tracks shortly before 10 a.m., and was rushed to Bellevue Hospital in stable condition. The MTA doesn't have any details yet, and the NYPD would only say that an injured man was removed from the tracks, but one witness tweeted from the scene:

me and Nani just witnessed an old man slipping and falling with his dog on the train tracks and the train just ran over him and his dog.

Reached by phone, witness Ashley Prenza said she was standing on the downtown platform when she saw a blind man and his seeing eye dog topple over the platform's edge and onto the tracks. "He was just walking toward the yellow line and all of a sudden and we heard him say, 'Oh no!' and slip and fall onto the tracks," Prenza told us. "Everyone started scattering to find someone to help him. Someone ran upstairs to find an MTA employee, and others were looking to see if any trains were approaching. The employee told him to stay still. We heard the train coming and everyone started screaming to try and stop the train, but it didn't slow down."

According to Prenza, "Everyone turned away at that point because we couldn't bear to look. The A train ran over the man and the dog, but he stayed down between the tracks with his dog. His face was injured but he survived." 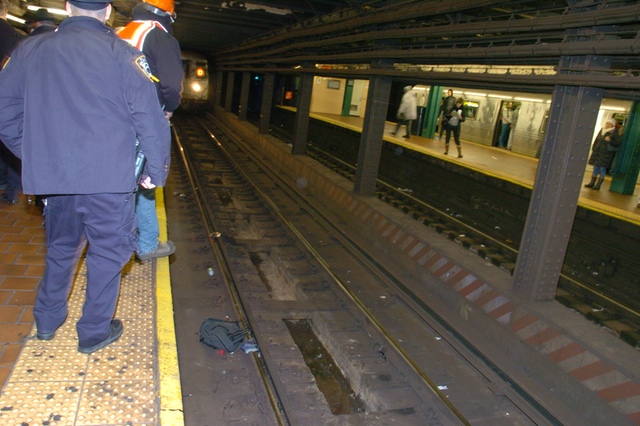 Prenza says first responders rescued the dog first, then removed the unidentified man. "The train was still on top of him" during the rescue, and when he he emerged out from under the train "people started taking pictures and recording, and some person yelled, 'Worldstar,' the website where people post stupid videos of people fighting and dumb stuff."

the sickest part of this was that people were taking photos and saying shit like world star... reasons why I hate humanity.

Shortly before 10 a.m., the MTA announced that due to NYPD activity at 125th Street, the following service changes are in effect: A & D trains are running local between 59 St-Columbus Circle & 145 St in both directions. There are no B trains between 145 St and Brighton Beach. 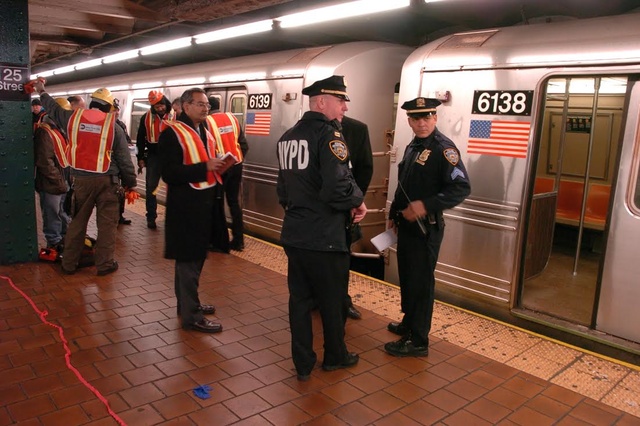 Update 11:02 a.m.: The MTA says normal service has resumed on the A, B and D lines, with residual delays.

Here's the brave seeing-eye dog who jumped onto the subway tracks after his blind master http://t.co/ycNHAiumJh pic.twitter.com/vlOMcTSi6A

At approximately 9:30 a.m. this morning, customers on the northbound platform at 125 St alerted subway personnel that a blind customer and his service dog had fallen onto the northbound express tracks at the station.
A construction flagger at the station observed the customer on the roadbed and instructed the customer to stay down in the trough between the rails and not attempt to climb back up onto the platform.
Other customers attempted to alert the train operator of an approaching northbound A train to stop. Contrary to initial reports, the train operator was unable to stop in time and 1 ½ cars did pass over the customer. The train did not come in contact with the customer and he was removed with minor lacerations to his head to St. Luke’s Hospital. There were no noticeable injuries to the dog.
Service from 59 St to 145 St was impacted for approximately one hour.
The incident remains under investigation.

#125 street
#struck by train
#subway
#original
Do you know the scoop? Comment below or Send us a Tip