[Updates Below] Just like the elders predicted, the first snow of the season has struck NYC, with ice crystals drifting toward the ground like disintegrating daggers. It's a wet and wild time out there. Pour one out for the poor souls currently trapped on the GW Bridge because of the weather:

Oops!! the winter weather has started. The GWB is a total lockdown. Expect Heavy traffic. pic.twitter.com/uYP0N067ka

The National Weather Service has issued "A Special Weather Statement," which sounds like an afterschool special about the dangers of getting hooked on icicles. They say the heavy snow, with snowfall rates between 1 and 2 inches per hour, should last for another hour or so, then start to ease off as we get closer to rush hour.

De Blasio added in a tweet: "Heaviest snow will fall between 3 PM and 6 PM with potentially fast accumulation. The snow will turn into rain in the evening, so roads will be slippery throughout rush hour. Please exercise caution."

🚨THEY ARE SALTING THE STREETS OF NEW YORK🚨

PROTECT YOUR LEATHERS AND YOUR SUEDES

Here are the Expected Changeover Times for snow to a wintry mix, then to plain rain. pic.twitter.com/7xQ2ct72IX

If you're unable to appreciate the joy of the first snow of the season because you're mostly worrying about your soggy commute home tonight, you can burst forth from your cocoon of cynicism by trying to see the world through another's eyes. Just think how exciting (or confusing?) this must be for Mandarin Patinkin:

NYC’s famous Mandarin duck is spending this snowy day at the Pond in Central Park. ❄️ If you visit, please remember to admire him from afar and do not feed him or any other wildlife in the Park. #FirstSnow pic.twitter.com/aM4xcs3EEg

See the longer, uncut video below:

And no one is having a better first ever snow day than Gritty, who is a poet of the snow:

This is a work of art:

We need more beautiful things in this world so I turned footage of @GrittyNHL playing in the snow into a piece of French New Wave cinema. pic.twitter.com/ocTTpev30F

Update, 5:30 p.m.: They were not kidding about the messy commute home. The Bayonne Bridge was closed in both directions and multiple accidents were reported on the George Washington Bridge, shutting down the upper-level eastbound lanes.

Here's a look at the #GWB, where today's #snow storm triggered multiple accidents, causing the upper level of the bridge to shut down. #Snowvember https://t.co/9ZVfyXl7iK (via @CitizenApp_NYC) pic.twitter.com/hxJd71fSVt

The subway...is not much better:

The 7 train at Grand Central right now. Not pictured: huge line of people winding up the stairs unable to get space on the platform. Amazon’s going to love it here! pic.twitter.com/bbO4j0XccF

There are also lots of trees down around the city, including on Sullivan Street:

"It's not safe to walk the streets of SoHo!" said Todd Thurman, who took the video above. "I'm sure there’ll be more limbs—and maybe trees—falling down. It's mayhem on Sullivan Street." 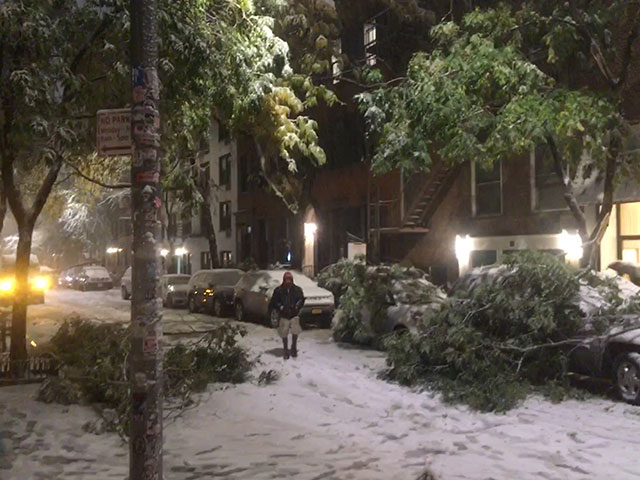 And ABC was witness to a tree coming down on the UWS:

TERRIFYING: Our cameras were rolling when a tree came crashing down right in front of Nina Pineda on the Upper West Side: https://t.co/lML8Gf6QD4 pic.twitter.com/uCPF9F01u1

Trees are falling in the east village due to the first snow of the season.... not feeling good about what’s to come this winter @ny1 #ny1snow 🤦🏻‍♀️🤦🏻‍♀️🤦🏻‍♀️ pic.twitter.com/StYlrK4t9C

Reader Courtney Morgan sent us photographs of an MTA bus that's stuck at 125th Street and Frederick Douglass Boulevard in Harlem. "The whole street is ice, not sure if it’s been plowed or salted," she said. 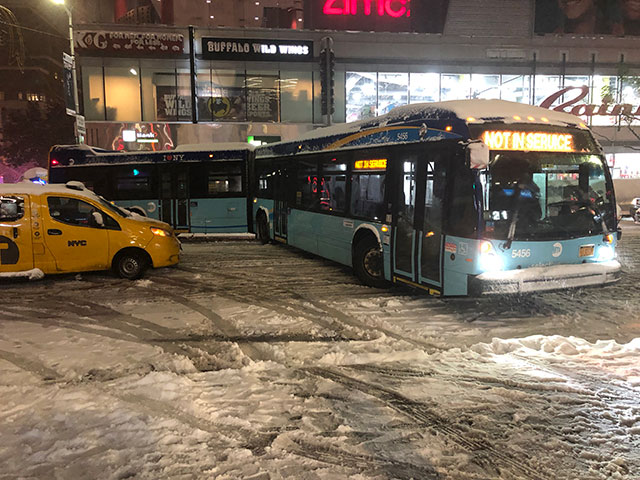 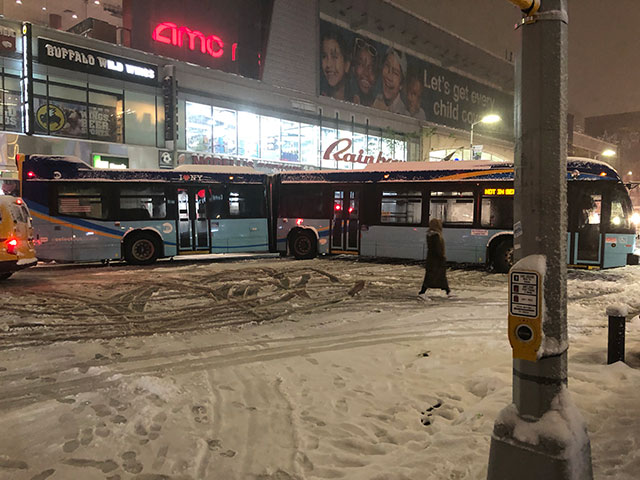 And Anne Marie Finlan got a photograph of the trifecta: Three buses stuck on 1st Avenue. 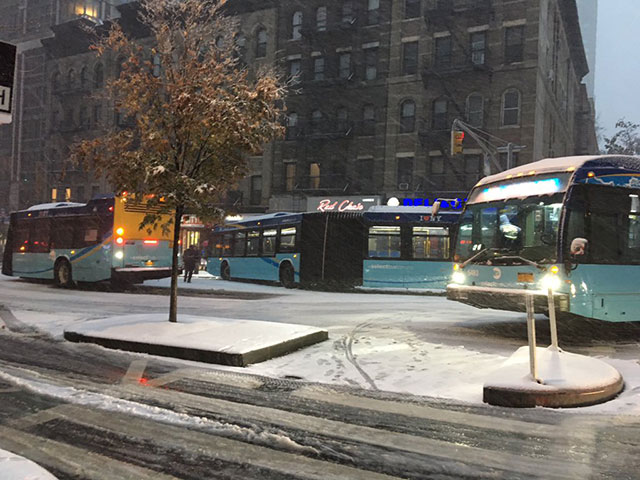 Be careful: Lots of trees falling!

Trees down on my block pic.twitter.com/3pskypOVaN

Tons of Trees down on 78th between 1st & 2nd @NYPDnews @FDNY pic.twitter.com/JR3IpZeYXg

First snow fall of the season and Port Authority be like pic.twitter.com/dFRRLwHs7R

People are so fed up with the traffic jam caused by the #snow storm that some WALKED off of the #GWB https://t.co/9ZVfyXl7iK pic.twitter.com/BE9RV4u2k3

#snow
#snow day
#snow problems
Do you know the scoop? Comment below or Send us a Tip