UPDATE: At Least 60 Injured After Metro-North Trains Collide In Connecticut

While there are no fatalities, it's believed four of the victims are seriously injured. WFSB reporter Karen Lee Tweeted these pictures of a very damaged train:

This is from friend who was on the train twitter.com/KarenLeeWFSB/s…

Another picture from my friend.He wasn't hurt but says he saw others #MetroNorth twitter.com/KarenLeeWFSB/s…

Another one from my friend who was inside the train.He was in the middle carts #metronorth #Bridgeport twitter.com/KarenLeeWFSB/s…

Here's another crazy photo from inside:

DRAMATIC PHOTO: Inside the train Metro North train that collided with a 2nd train near Fairfield CT - @kallmekg twitter.com/NewsBreaker/st…

And here's an image of the trains:

The MTA Police says it will conduct a full investigation.

Metro-North service is suspended between South Norwalk and New Haven. Amtrak is also suspended between New York City and Boston. One train passenger says that she was let off in South Norwalk, "I was supposed to get picked up in New Haven but now that's not happening." She added that the stranded seem to be embracing the situation, "Everyone's drinking. Mouthing off to cops. Stuffed collars in $10,000 suits sitting on the ground drinking shitty beer and eating pizza." 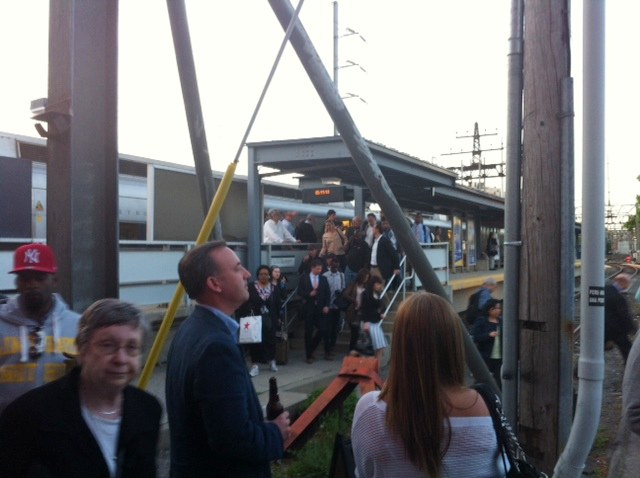 At the South Norwalk station, via reader Emily Niland

Update: The Hartford Courant reports that Bridgeport Mayor Bill Finch said they "dodged a bullet" with no fatalities. But the damaged "twisted" tracks may leave commuters without train service for many days, "We're in a pretty precarious situation here." 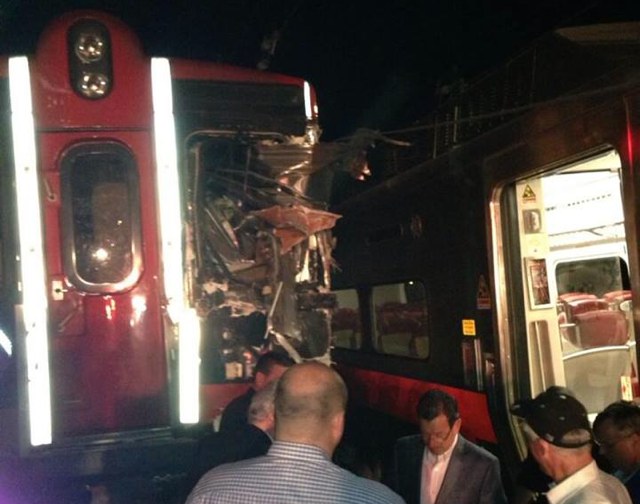 Update 2: Connecticut Governor Dan Malloy said, "As of now, around 60 people are in the hospital due to the train collision on the Bridgeport and Fairfield border. Five people are in critical condition and one is in very critical condition. Due to the physical damage and the ongoing investigation, travelers should anticipate that all train service will end at Bridgeport and South Norwalk through at least sometime on Monday. Updates will be provided as more information becomes available."

#connecticut
#derailment
#mass transit
#metro north
Do you know the scoop? Comment below or Send us a Tip