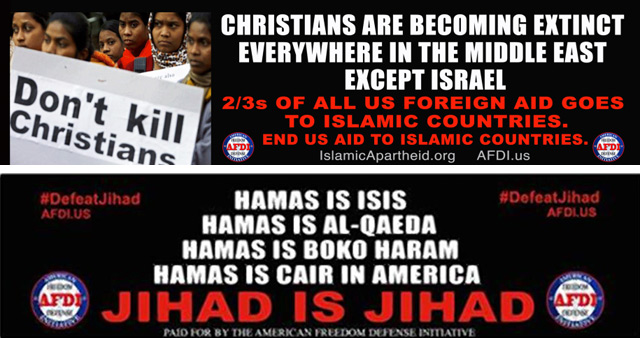 Two more of the ads

Thanks to Geller, the new ads, which you can see above, will be placed onto 100 MTA buses and two subway stations (the entrances of the E. 59th Street station on the Lexington Avenue line and the Columbus Circle station) starting next week. Geller and her American Freedom Defense Initiative have been spending a lot of money to spew hate via advertisements for years now, but this is one of the biggest local ad buys she's ever done.

The MTA previously butted heads with Geller and her group in 2012, when they rejected some of her ads because of the use of "savages." At the time, the MTA argued the ads violated its "no demeaning" language policy, but a judge ruled in favor of Geller's First Amendment rights. So the MTA instead revised its policy, requiring that the ads feature a prominent disclaimer stating clearly that these are not the views of the MTA.

Update 5:22 p.m.: The MTA has rejected the ads. Here's their statement, issued a few minutes ago:

The Metropolitan Transportation Authority (MTA) has rejected a request by American Freedom Defense Initiative to run advertisements that include the phrase “Killing Jews” on the back of MTA New York City Transit buses.

The MTA concluded it was reasonably foreseeable that displaying the advertisement would imminently incite or provoke violence or other immediate breach of the peace, and so harm, disrupt, or interfere with safe, efficient, and orderly transportation operations. Under the MTA’s viewpoint-neutral advertising standards, the agency can prohibit advertisements that violate that standard.

The advertisement features the quotation “Killing Jews is Worship that draws us close to Allah,” attributed to “Hamas MTV.” It depicts a masked figure and includes the phrase, “That’s His Jihad. What’s yours?” The advertisement was an apparent parody of “MyJihad” ads sponsored by the Council on American-Islamic Relations, which the group said were intended to show that jihad is a concept of individual and personal struggle, rather than violent conflict or terrorism. Those ads ran on buses in other cities, but not in New York.

The American Freedom Defense Initiative has run many other advertisements promoting its views on jihad, Hamas, Islam and Israel throughout the MTA network. In 2011, the MTA rejected a proposed advertisement from the group on the grounds that it demeaned groups of people on account of their religion, national origin or ancestry. The group sued the MTA, and the next year a federal judge ruled the MTA’s “no demeaning” standard violated the First Amendment. The MTA responded by updating its advertising standards to the current standard.

The MTA does not decide whether to allow or not allow a proposed advertisement based on the viewpoint that it expresses or because that viewpoint might be controversial. MTA Director of Safety and Security Raymond Diaz, a former chief of the New York City Police Department Transit Bureau, concluded the proposed advertisement would lead reasonable observers to interpret it as urging direct, violent attacks on Jews, given turmoil in Gaza, Syria and Iraq and New York City’s heightened security concerns.