As of this morning, five of the passengers who were killed late Tuesday night when Northeast Regional Train 188 crashed near Philadelphia have been identified. But it's possible that more victims will still be found among the wreckage, and it's now being reported that an eighth body has just been found:

All five identified victims have ties to New York or New Jersey: the Dean of Students at Medgar Evans College in Brooklyn, a Naval Academy midshipman from Far Rockaway, an Associated Press video software designer from Plainsboro, New Jersey, a Wells Fargo senior VP who lived in California, and commuted weekly to Manhattan, and a tech company CEO from the Lower East Side.

Train 188's engineer, who survived the crash, has also been identified, as Brandon Bostian, of Queens. Bostian was allegedly driving the train over 100 miles an hour around a sharp curve on the track when the derailment occurred. NBC reports that four victims were recovered from the train itself. Two more were found outside the train, and one died in the hospital. The location of the eighth victim has yet to be reported. Another 200 passengers were injured, at least eight critically. 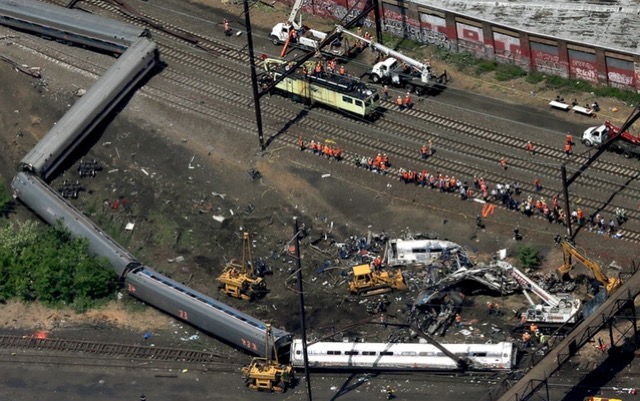 The scene of the Amtrak crash in north Philadelphia. (Win McNamee/Getty)

Some people are still unaccounted for, but it's unclear how many, because some Amtrak customers may have purchased tickets but not boarded train 188.

Derrick Griffith, 42, of Brooklyn, was acting Dean of Students at Medgar Evers College in Brooklyn. The News reports that he recently defended his doctoral dissertation on Urban Education, and was set to graduate at the end of May. Griffith was also a founding principal of CUNY Prep School—founded in 2003, the school offers college preparatory classes to New York City teenagers who haven't attended High School.

CUNY Prep, which is closed today, said in a statement, "We are all struggling with this terrible news and trying to find our way during this sad time." Instead of regular classes, "The staff will be there to mourn together and provide support to those in need."

Medgar Evers President Rudy Crew said, "He was an outstanding and very distinguished person who guided many, many students at Medgar Evers since 2011... and was really the source of tremendous motivation for all us in one form or another, he did so much for the students."

Justin Zemser, 20, of Rockaway Beach, was traveling home from the U.S. Naval Academy on Tuesday, where he was wrapping up his second year as a midshipman. A popular student, Zemser was vice president of the Jewish Midshipmen Club, and played wide receiver on the Academy's football team, NBC reports. He was an only child.

Zemser's mother Susan told 1010 WINS on Wednesday, “He was supposed to come home last night … at 10:30. And when I went online to see, you know, if everything was on time, they said there was a derailment. All night we kept on calling hospitals but nothing. And then we got the phone call this morning that my son has passed.”

U.S. Representative Gregory Meeks, who nominated Zemser to the academy along with Senator Charles Schumer said in a statement, "He was an outstanding young man whose high character, intellectual curiosity, and maturity beyond his years inspired confidence."

Jim Gaines,48, of Plainsboro, New Jersey, joined the Associated Press in 1998, as a video software architect. On Tuesday night, he was traveling back from meetings in Washington. CBS reports that Gaines "was a key factor in nearly all of the news agency’s video initiatives, including a service providing live video to hundreds of clients worldwide."

His accolades included the AP Chairman's Prize in 2006 for developing an online Video Network for the news organization, and the AP's Geek of the Month award in 2012. Gaines is survived by his wife, Jacqueline, 16-year-old son Oliver, and 11-year-old daughter Anushka.

Abid Gilani, 55, was identified Wednesday afternoon. He was a Senior Vice President at Wells Fargo, in the Commercial Real Estate division.

According to the News:

Gilani and his mother from Toronto had attended funeral services for his uncle in Virginia, and he had to return to New York City for work....

The married father of two had recently relocated with his family to Walnut Creek, Calif. from Maryland while his kids went to college on the West Coast. The dedicated dad and executive had to commute across the country each week to work in Manhattan and returned home each weekend to California to be with his wife.

Rachel Jacobs, 39, of the Lower East Side, was initially unaccounted for, but was identified around 11:00 last night. CEO of a Philadelphia-based education technology company called AppreNet, she commuted between home and work on a weekly basis. She joined the company in March, and had plans of moving to Philadelphia.

Jacobs is survived by her husband and two-year-old son. Her family said in a statement, "This is an unthinkable tragedy. Rachel was a wonderful mother, daughter, sister, wife and friend. She was devoted to her family, her community and the pursuit of social justice. We cannot imagine life without her."

As of this morning, another passenger, Marc Gildersleeve, 45, of Maryland, is still unaccounted for. His family traveled to Philadelphia in the immediate wake of the crash. The News reports:

His 13-year-old son Marc told the News, "Everyone is just frustrated and worried. It's hard to sit around and wait. It's hard to keep the patience."

Amtrak's most recent public statement was issued at 7:15 p.m. on Wednesday: "We are deeply saddened by the loss of life and injuries to Amtrak passengers and employees as a result of the Amtrak Northeast Regional Train 188 derailment north of Philadelphia on Tuesday evening." However, "Due to the investigation, it would be inappropriate for us to comment or speculate about any information that is being investigated."

UPDATE: Officials have confirmed that an eighth body was recovered from the wreckage. NBC reports:

The confirmation came as large cranes worked overnight and into the morning to move damaged Amtrak cars and debris from the site of the wreck. Philadelphia Mayor Michael Nutter declined to identify the latest victim.

UPDATE: Multiple media outlets are reporting that the eighth victim, whose body was recovered earlier today, has been identified as 47-year-old Laura Finamore of Manhattan.

#BREAKING: 8th victim of #Amtrak188 ID'd as New Yorker Laura Finamore, who was returning from a memorial svc in DC. pic.twitter.com/792G6mtzGk