[UPDATE BELOW] Eight people were injured after a BMW and a Bentley, both driven by allegedly drunk drivers, crashed into each other in the Flatiron District at 3:46 this morning. Police say 25-year-old Arnaldo Gil of Miami, Florida, was the driver of a silver BMW and that Gil was observed "swaying under his feet with bloodshot, watery eyes," at the scene of the crash. 48-year-old Brooklynite Joel Antoine was allegedly driving the Bentley, and police claim he too, was drunk at the scene. Both men blew over a 0.08 BAC and were arrested for DWI. An FDNY spokesman said that two of the injured were in critical condition, another two were in serious condition, while the rest suffered minor injuries.

The police spokesman had no additional information on the circumstances surrounding the crash. A passenger in Antoine's Bentley told the Post that he and a coworker met Antoine at a bar in Greenwich Village, and took him up on his offer for a ride back to their workplace, Chelsea Piers. "The whole front of the Bentley was crushed, it was crunched in," the passenger, who is identified as "John," said. "My coworker was on a stretcher. The lady beside me was unconscious. He [the driver] was arrested." In addition to DWI, Gil was also charged with refusing to take a Breathalyzer.

[UPDATE] A tipster passed along the photo of both cars parked on Third Avenue and 21st Street. An NYPD spokesperson said they had no additional details regarding how the accident actually occurred. "Clearly alcohol may have played a factor," they said. 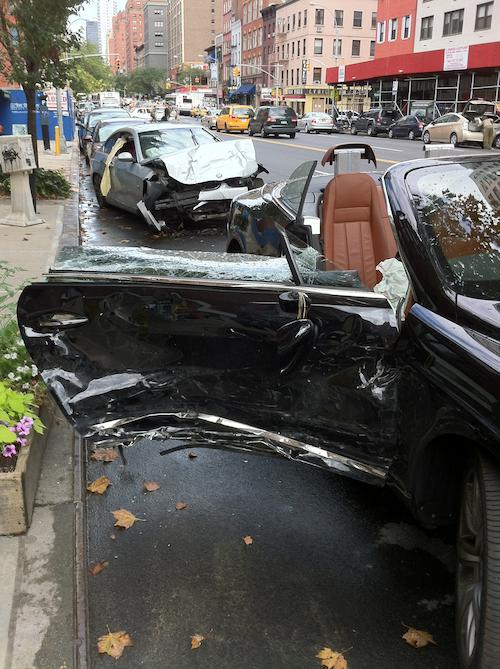 #bentley
#bmw
#car crashes
#dwi
#flatiron district
Do you know the scoop? Comment below or Send us a Tip