A Long Island Expressway crash involving a tractor-trailer and many other vehicles has left at least one person dead and at least 16 injured 33 injured. Newsday reports that the crash occurred in Yaphank and involves "at least 25 vehicles, police said. The crash closed the LIE in both directions, and portions of the eastbound road will be closed all night, the police spokesman said."

The crash happened in Shirley, near Exit 68 at the William Floyd Parkway, around 2:40 p.m. One driver who was just ahead of the crash told NBC New York, "All we heard was crashing behind us, it sounded like thunder. Looking back, all I saw was glass and metal, and they went right past us, at least 40 miles per hour."

The crash was reported at 2:38 p.m., at Exit 68, the William Floyd Parkway, police said. At least two of the vehicles caught fire, including a tractor trailer. The subsequent closures begin eastbound at Exit 66 and westbound at Exit 69. At least two patients were being treated at Stony Brook University Hospital. Sean Shilling, 37, and Nicole Borralli, 20, were airlifted there, an official said. Shilling was in fair condition and Borralli was in good condition, she said. No other details were immediately available. 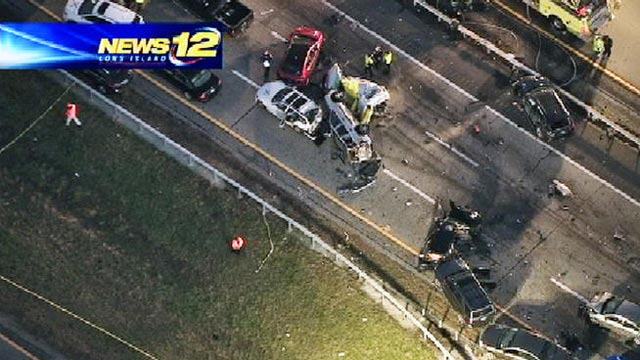 NBC New York adds, "Aerial footage provided by News12 Long Island shows the trailer partly incinerated, alongside at least two cars that appear to be blackened and burned. Multiple other vehicles, including a box truck, are scattered nearby, apparently having collided into another or the guardrail."

Another driver, Danny Gershonowitz, told Newsday, "The gentleman to the right of me went down to the ground and was praying. When I looked in my rear view mirror, there was smoke and flames coming out of a car or a truck." Gershonowitz said he and others went to the the burning truck and yelled for the driver to wake up—"We got his attention - I don't know if he was groggy or shocked - but eventually he kicked out the windshield"—and helped him out.

Three victims were transported to hospitals in critical condition.

UPDATE 9:01 a.m.: "It was the worst scene that I've ever seen in my life," Joseph Williams, an FDNY veteran who now serves as commissioner of Suffolk County's Fire, Rescue and Emergency Services agency, tells Newsday. "We had vehicles that were on fire. We had trucks that were on fire. We had a lot of people still trapped in their cars. We had a lot of citizens that weren't injured helping other citizens."

#car crash fatality
#crash
#lie
#long island
#long island expressway
Do you know the scoop? Comment below or Send us a Tip
A new Gothamist is coming! We’ve moved comments over to our beta site. Click here to join the conversation and get a preview of our new website.