[Updates below] Mayor Bloomberg's deep, sacred bond with the First Amendment will be tested today at 2 p.m. when Occupy Wall Street's drummers will begin a 24-hour "JAM SESSION" outside his townhousemansion on East 79th Street. A release proclaims, "Tie-dye, didgeridoo, hackeysack welcome! No shirt, no shoes, no problem! And if you don't have talent, don't worry: FREE DRUM LESSONS offered! Also on offer: collaborative drumming with the police!" Nothing makes that bass drum boom like a baton.

After Monday's eviction, drummers as well as other musicians have attempted to bring their instruments into Zuccotti Park to mixed results, with some being kicked out for having accordions while others are allowed by Brookfield to lug their drums in. The rules themselves don't prohibit music but state that the park is for "passive recreation."

Today though, none of that matters: the First Amendment applies on the Upper East Side. Although it's conceivable that the mayor may not even be in the country right now, let's picture him painting dollhouse furniture, or playing Jenga, or making a friendship necklace for Ray Kelly—and at 1:59 p.m. he's juuuust about to thread the final, tiny bead on in peace and quiet.

[UPDATE / 12:47 p.m.]@Newyorkist tweets, "Police massing, on 5th Ave at 79th Street, near Bloomberg's mansion" and posts the following photo. Will there be more cops than drummers? And who will be the first NYPD officer to play the cowbell? 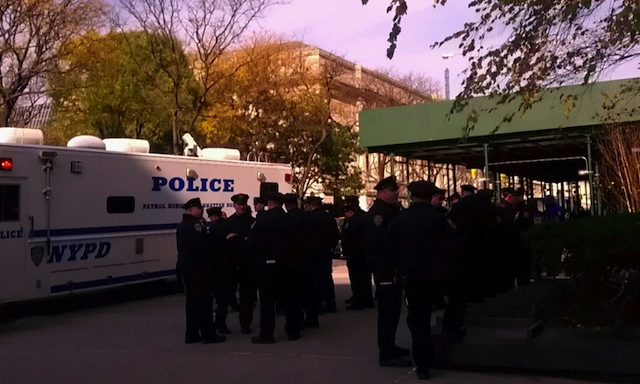 [UPDATE / 2:13 p.m.] The drumming has commenced! Just not on Mayor Bloomberg's block: the NYPD has apparently shut down 79th street to pedestrian traffic. 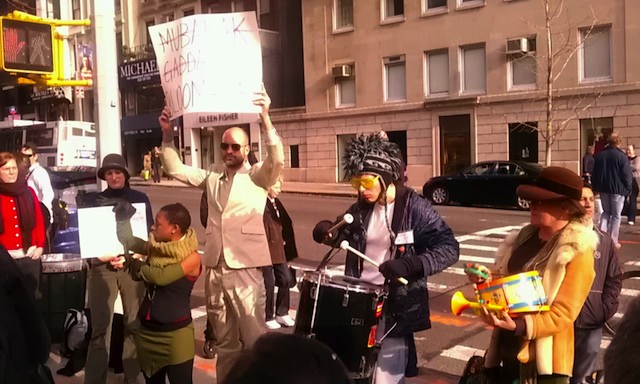 According to @Newyorkist there's a "bottleneck" of drummers and protesters on the Northeast corner of 79th Street and Madison.

Drummers on the northeast corner of 79th and Madison (@Newyorkist)

Check out the (mostly steady) livestream below.

[UPDATE / 4:22 p.m.] Despite being barred from 79th street, a decent-sized group of protesters remain at 5th Avenue and 79th street. 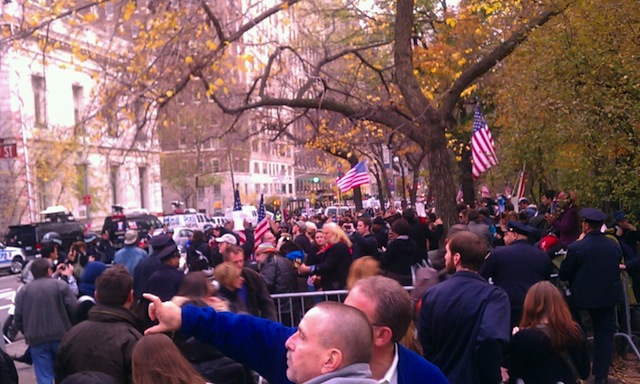 #didgeridoos
#drum circle
#first amendment
#freedom of speech
#hippies
#mayor bloomberg
#occupy wall street
Do you know the scoop? Comment below or Send us a Tip