During a combative and highly entertaining 90 minutes last night, the seven Democratic mayoral hopefuls ganged up on each other to prove their mettle at the Official NYC Campaign Finance Board Democratic Mayoral Debate. CIty Council Speaker Christine Quinn and former Comptroller Bill Thompson “tagged team” against Public Advocate Bill De Blasio, trying to paint him as an opportunistic flip-flopper riding a wave of phony populism to the top of the polls. Meanwhile, the candidate with the most ink, Anthony Weiner, was a non-factor at the debate, scoring the biggest reaction from the crowd when he admitted to texting while driving.

The debate (which was co-sponsored by Gothamist, along with partners NY1 News, NY1 Noticias, WNYC, Citizens Committee for New York City, Citizens Union, Hispanic Federation, and Transportation Alternatives) featured the seven Democrats running for mayor, but was mostly dominated by the three candidates leading the polls, Quinn, Thompson, and de Blasio. They squared off on funding for hospitals, education, and ending the widening inequality that marked the Bloomberg years. The debate also focused on policing, especially the unconstitutional practice of Stop and Frisk.

Public Advocate de Blasio restated his support of the Community Safety Act, asking Quinn why she has stood with the mayor and police commissioner and will vote against a "ban on racial profiling."

De Blasio's phrasing of the Community Safety Act (CSA) was incorrect. As Quinn would go on to point out, there is already a law against racial profiling. The two bills comprising the CSA, Intro 1080 and Intro 1079, would expand the profiling ban to include gender identity, housing status, and immigration status, allow citizens to meaningfully challenge discriminatory police practices in court, and install an Inspector General to oversee NYPD policy and make recommendations.

In June, Quinn voted for the Inspector General (Intro 1079) but against the profiling provisions. Mayor Bloomberg vetoed both bills, and the vote to override those vetoes is scheduled for today.

In a sing-songy performance, Quinn dodged the question and explained how historic the vote will be tomorrow, before quickly going on the attack. “De Blasio is wrong. Racial profiling is already illegal in New York City. If we get lawsuits on profiling at the state and federal level, this will set up contradictory rulings.”

“You didn’t answer my question -- will you vote against it?” de Blasio persisted.

Quinn admitted she would vote against it because she was worried about "contradictory court decisions," but would score points against de Blasio only moments later, when Thompson brought up a de Blasio ad that hailed him as the only candidate who would end Stop and Frisk.

“Bill, why are you still running that ad? You need to stop lying to the people of New York City,” Thompson asked during a section of the debate where candidates directly questioned one another (almost all questions were directed at de Blasio).

“I’m the only one advocating for a new police commissioner, an inspector general, and a law banning racial profiling, these are the three things that will end stop and frisk,” de Blasio countered. (He failed to mention that Comptroller Liu would also do these three things).

When it was Quinn’s turn to ask a question of a candidate, she improvised an attack on de Blasio, asking Thomspon if he was satisfied with de Blasio’s answer. He wasn’t.

“In terms of professional wrestling, I believe this is called a tag-team,” de Blasio remarked.

Weiner, who is plummeting in the polls, asked Quinn about her slush fund scandal, and even attempted to implicate de Blasio in some fashion. The strange, unfocused question was dismissed by Quinn, who then chastised Weiner for attacking de Blasio (even though, funny enough, she did the same all night).

“Don’t cast aspersions on Bill de Blasio,” Quinn said. “I have no idea what you’re talking about.”

Apparently ignoring her statement from a few moments before, Quinn attacked de Blasio on a misquote from his wife that was published in the New York Times yesterday, which she took as a slight against Quinn’s sexuality.

“I found the statement so hurtful,” Quinn said, ignoring the Times’ retraction. “Raising someone’s family should never happen during a campaign.”

“It was a real substantive quote,” de Blasio responded. “Read the actual quote the Times has now published.” 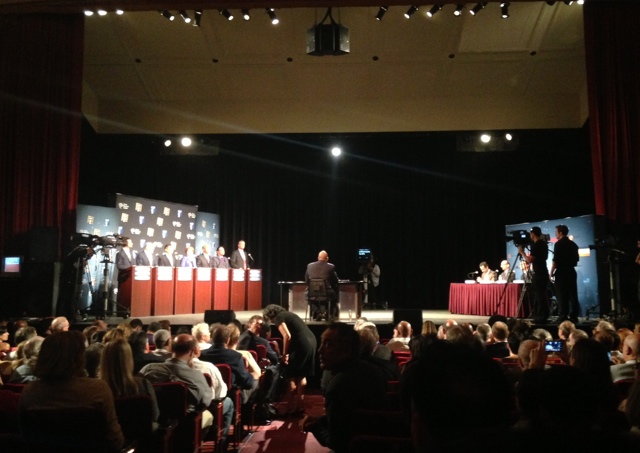 The debate had started with a discussion of the rash of hospital closings during Bloomberg’s third term.

“We must keep hospitals open. We were in the middle of a rezoning that could have helped St. Vincent’s Hospital when it shut down,” Quinn said, referring to a possible plan that could have saved the West Side hospital, portraying herself to a Town Hall crowd that was heavy with Quinn supporters, as a candidate who finds solutions in hard situations.

But de Blasio quickly fired back. “Quinn’s response is a smokescreen,” he said. “As the major ally of Bloomberg, Quinn could have saved the hospital by forcing him to get involved.”

Mr. de Blasio took the first question from the moderators about why he was willing to get arrested to save LICH. De Blasio explained, “Because it’s time for leaders to step up. The city and state must fight to keep emergency rooms open, and to protect the public’s health.”

“The mayor told me he didn’t want to get involved in hospitals,” Thompson told voters. “That’s unacceptable.”

When the subject turned to inequality, de Blasio and current comptroller John Liu discussed plans to tax the wealthy (Liu taking a jab at the wealthiest candidate, Thompson, who made $500,000 last year) while Quinn and Thompson insisted on higher taxes only as a last resort.

“We should tax the rich of the city and use the money to pay for universal pre-kindergarten and after school programs,” de Blasio proposed, pointing out that he would be the only mayor in New York City history with a child in public schools. “Bloomberg fiddled as rome burned. We now have a crisis of inequality and must begin taxing the wealthiest New Yorkers.”

“If you have to raise taxes, you have to do it progressively,” Quinn countered. “We’re the only city where people who pay the Earned-Income-Tax-Credit also pay income tax. What we need is a pathway to middle-class jobs through tech training.”

Fringe candidate Reverend Erick Salgado, who frequently criticized the debate for marginalizing him “because I have an accent,” spoke out against the “socialist” taxation programs presented by the other candidate, while Sal Albanese, also an incredible longshot for mayor, called for a return to “common-sense.” He remained vague as to exactly what that sense would entail.

The lightning round section, which has candidates answer yes or no (though many expanded upon their answers), featured questions like "Would you allow students to have cellphones in school?" (all said yes, but some said they shouldn't be in the classroom) and "Should you be free to drink a beer on your own stoop?" (because it's illegal now). All the candidates, except Salgado, said yes. Weiner added that New Yorkers should be able to drink in the park and beach, too.

The lightning round was also when Weiner was asking about texting while driving:

The candidate’s finished the evening by focusing on education.

“I want to be remembered for education,” Thompson said in a closing statement. “I want the achievement gap to be closed—not schools.”

Comptroller Liu, in his final statement, even spoke in Spanish, appealing to Hispanic voters in an attempt to reach out to the new immigrant voting block that could someday displace the existing Democratic machine. “I want to enact change that actually changes New York,” he said.

Quinn, striking a centrist tone, said she has “fought and delivered for New Yorkers, and I will end the affordability crisis.”

“We are still living a tale of two cities,” de Blasio said in his closing statement. “We need a real break from the Bloomberg years, because we can no longer leave some New Yorkers behind.”

Though there was no clear winner of the debate, one thing was certain: neither Quinn nor Thompson want their challenger to be de Blasio, who, while he didn’t shine as bright as Quinn last night, didn’t exactly fold under a sustained attack from two of New York’s most establishment politicians.

You can watch the whole fun mess right here.