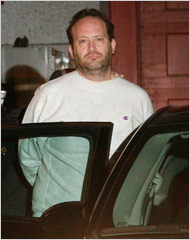 The family of a possibly insane killer who butchered a doctor now wants him to be reexamined. Last week, a lawyer for David Tarloff, who killed a psychiatrist in her Upper East Side office and attacked her colleague with a variety of knives in February, mentioned his client's problems and now a motion reveals their extent.

Tarloff's family believes he has stopped taking medication that stabilized him enough to be fit for trial when he was transferred to Rikers Island from Bellevue. His lawyer described a conversation Tarloff's father had to WABC 7, "David was really breaking down. He was crying and he said, 'Dad, I don't understand why they're doing this to me. I'm the messiah.' And then he also described an incident seeing flakes falling from the sky, which seemed to indicate some sort of approval or some sort of sign from God."

Additionally, the motion says Tarloff was punched in the face by one inmate and called "the cleaver" by others and requests Tarloff be moved back to Bellevue's prison ward. However, a Corrections Department official says Tarloff was separated from the general population when he arrived at Rikers.