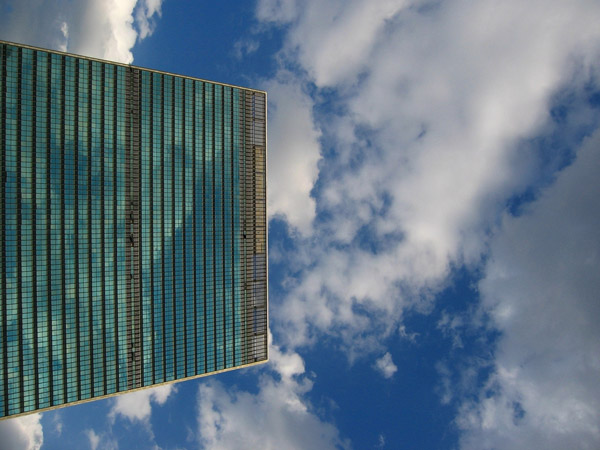 The United Nations is finally moving ahead with plans to renovate its headquarters on Manhattan's East Side. The organization selected Swedish contractor Skanska AB to head up the preconstruction phase of the $1 billion project. Never known for being quick on its feet, a U.N. renovation project has been talked about since the mid-90s and is scheduled to take place in three phases over seven years, starting in early 2008.

During each phase of construction, U.N. employees will be relocated to various locations in Manhattan and Queens. The General Assembly will meet a block from the headquarters on 46th Street and the Secretary-General's office and the Security Council will remain in the main U.N. complex, but in a temporary building. The Sun reports that the plan calls for the Secretariat Building (the tower) to be renovated 10 floors at a time.

Built in 1950, the United Nations Secretariat Building has never had a major overhaul since it was built. The Conference and General Assembly buildings (completed in 1951 and 1952) and the Secretariat all contain asbestos and are in general disrepair. There are leaky roofs, poor HVAC systems and they don't meet all of NYC building codes (hello, lack of fire sprinklers). The organization also hopes to make the buildings more energy efficient. The Secretariat Building reportedly wastes as much as 25% of the heat it uses in the winter.

One original renovation plan called for a new building on the site of Robert Moses Park, but state lawmakers, who have jurisdiction over the park, objected.

Photo of the United Nations Secretariat Building by kieranpmoore on flickr